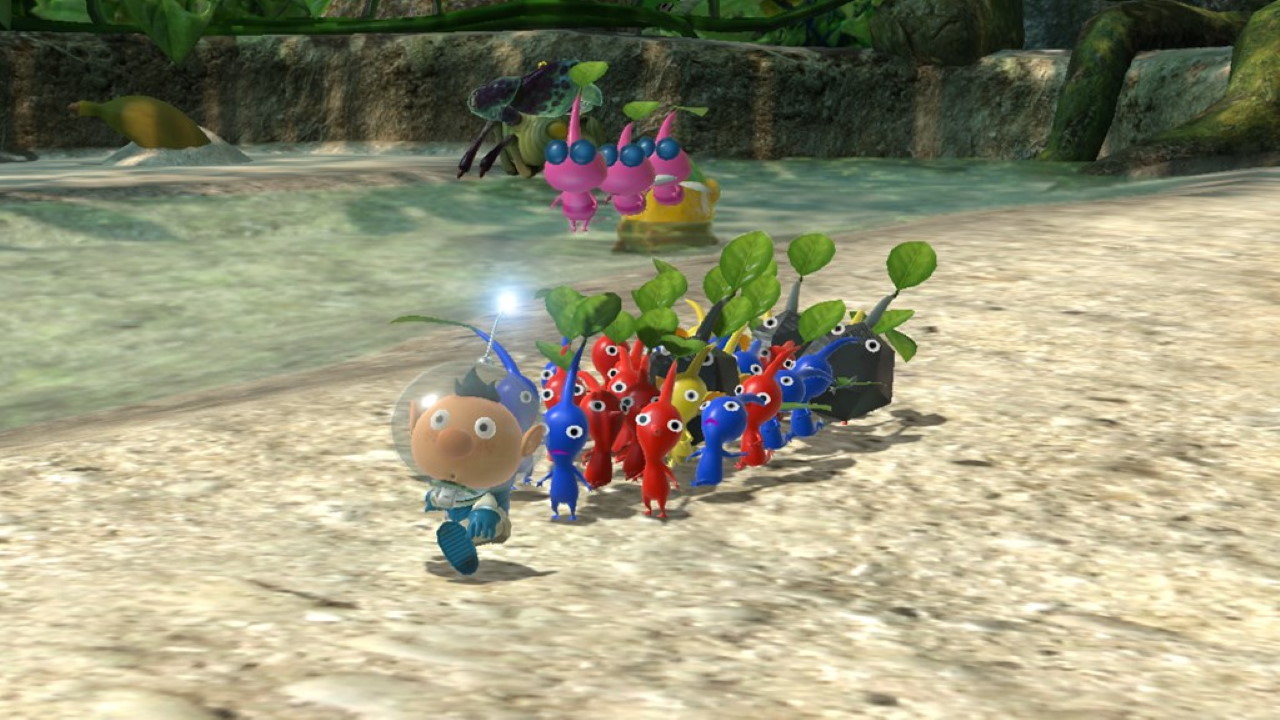 The Pikmin series actually has a lot in common with the Wii U, Nintendo’s failed console predecessor to the Switch. They both are actually pretty cool concepts, delivering unique gameplay opportunities with Nintendo’s usual high level of quality. And they both have gone quite underappreciated with the wider gaming audience. Of course, the two combined with the release of Pikmin 3 on the Wii U, which took advantage of the Gamepad and HD visuals to deliver a very enjoyable strategy gaming experience. But as with most big Wii U releases it was not a huge success, but that could change with Pikmin 3 Deluxe on Nintendo Switch.

Pikmin 3 follows a similar story to the two Gamecube originals.  Playing as the three member crew of the S.S. Drake, Alph, Brittany, and Charlie, you set out to find a new food source for your home planet of Koppai. Hearing reports that PNF-404 is a potentially lush environment you set out but the ship crashes immediately, scattering the crew. Your first tasks are to reunite the crew, repair the ship, and scout the area for food, but the discovery of Pikmin and various local hostile creatures makes this another long strategy puzzle solving adventure. 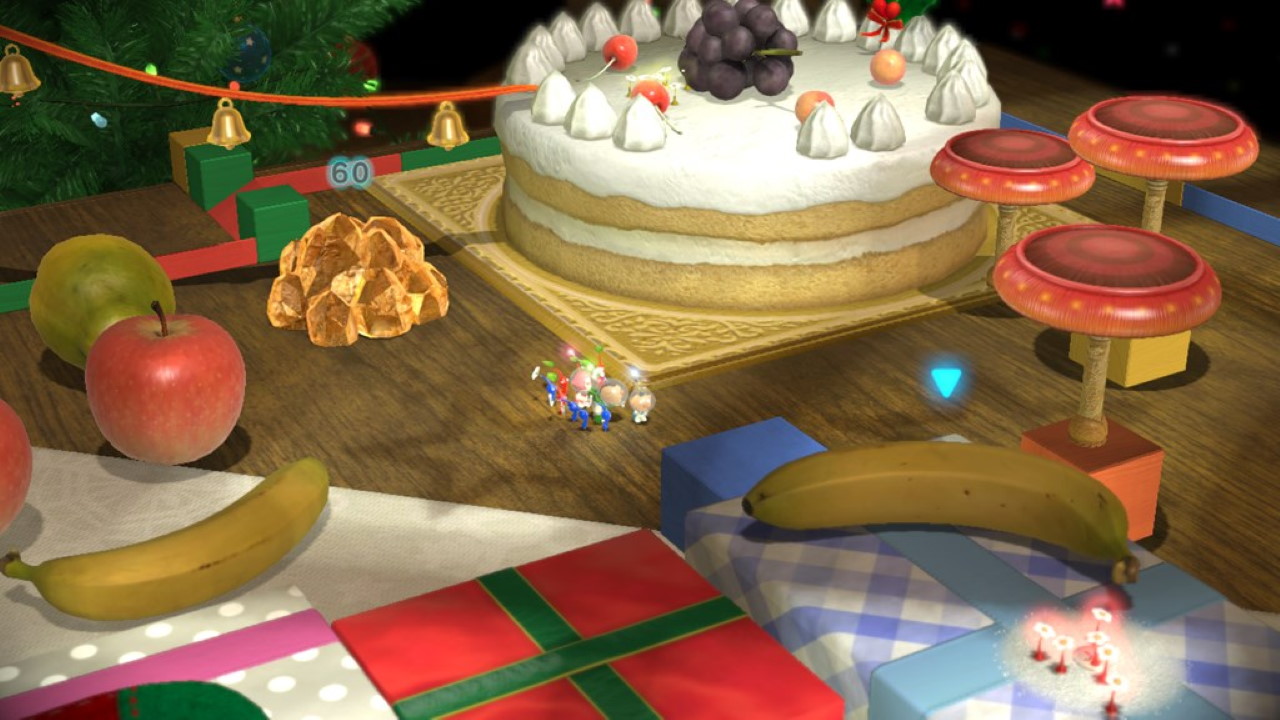 In case this is your first foray into the world of Pikmin, the series is basically a real-time strategy game made for consoles by Nintendo. You walk around the map as one of the three crew members, controlling an army of various types of Pikmin with a max of 100 on screen at any time. Using them you will solve environmental puzzles, combat enemies, and collect valuable items such as fruit which add additional days of exploration as you complete your overall mission.

Each Pikmin type offers its own strengths and weaknesses, or potential uses. Red are immune to fire and deal extra damage. Yellow can conduct electricity and soar higher when tossed while blue can breath underwater. Mixing and matching these three types against enemies, bosses, or other tasks in the level is the key to victory for the most part. And with so many playable characters, you can always split up to accomplish multiple tasks or work together on the same objective, often because the task requires coordination.

Pikmin 3 on Wii U felt very much like an HD extension of what the series had already put out. Adding a third captain to control does expand your multitasking options as you explore the game’s five main stages. Purple and white Pikmin were swapped for rock and winged Pikmin respectively, changing up some of the strategy. But overall this is a standard Pikmin game through and through, with some much needed quality of life improvements layered on top.

However, even with these updates and changes Pikmin 3 is often viewed as the worst of the entire series. It’s still a solid game, but it doesn’t live up to its predecessors. The first game had players working against a ticking clock that could not be extended as it is here. And Pikmin 2 was simply superb in every way. Its improvements over the first game were immense and the overal design was pitch perfect. 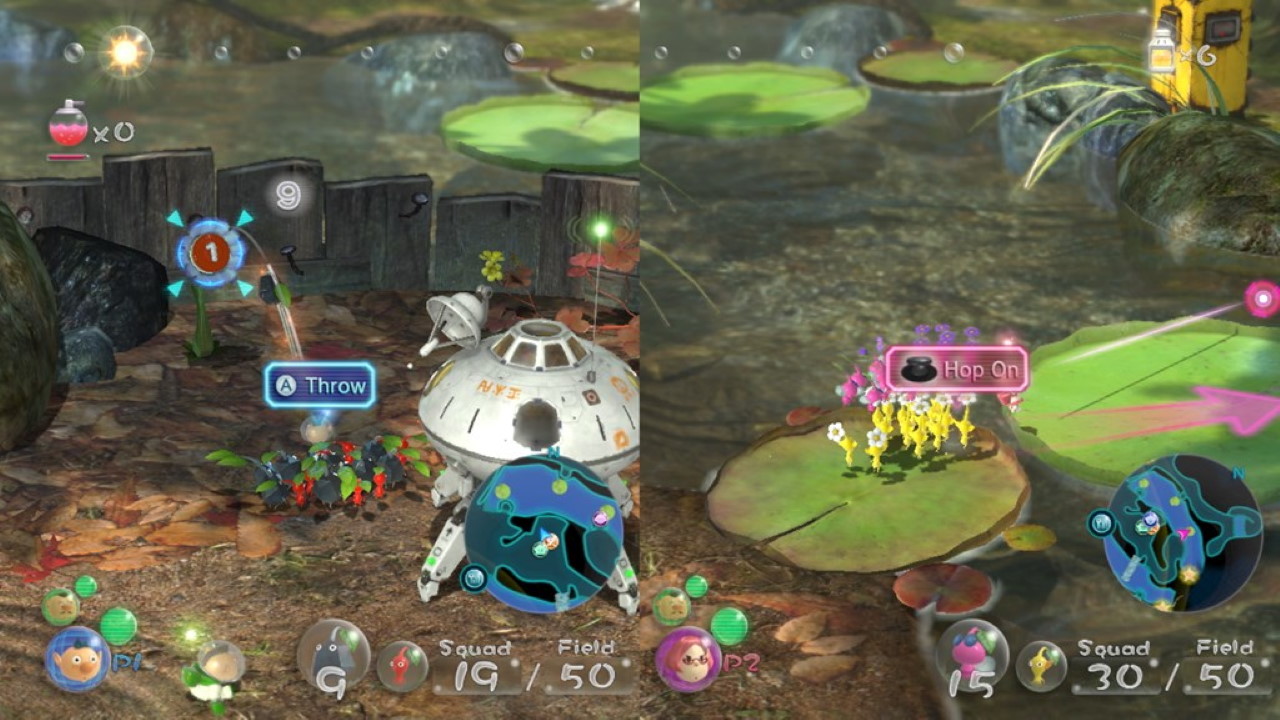 Pikmin 3 is a solid continuation off of this, but the game has other elements that hold it back from being the best of the bunch. Three playable characters is a bit too much really, and cause many players to become overwhelmed with all there is to keep track of. The game also starts with a slow, plodding introduction that can really kill the pacing of those first few chapters. Collecting fruit simply isn’t as engaging as the real-world objects of Pikmin 2, and the maps you search for that fruit in are less memorable and aren’t as well designed. Some areas of the game could have used more improvement too, such as Pikmin AI and pathfinding abilities, which also could have been bumped up for this Deluxe re-release.

While Pikmin 3 might not be the pinnacle of the series, Pikmin 3 Deluxe does end up feeling like the definitive way to play through this adventure. Adding full split-screen co-op, side missions, and a few other goodies, this Deluxe release enhances and improves the base experience without much in the way of sacrifices. The loss of the Gamepad simply puts the map a button tap away, though the touch controls were nice for managing your multiple captains. The full co-op actually makes the multiple playable characters work far better. It’s a shame there’s no online support though, especially with most players unable to visit others and spend much time in the same room. The side missions and enjoyable add-ons, and there’s some surprises in the package as well.

The graphics haven’t been improved in the shift from Wii U to Switch, but the game still delivers on style. Your Pikmin army looks great marching behind you with leafs or flowers swaying. Fruit looks almost too lifelike and enemy boss design is some of Nintendo’s best work. But all the moving parts of the game require an overall visual downgrade in comparison to more robust titles so don’t go in expecting high quality textures and character models. Your bird’s eye view makes that all moot for the most part, so what matters is the overall presentation which is always where this series soars. 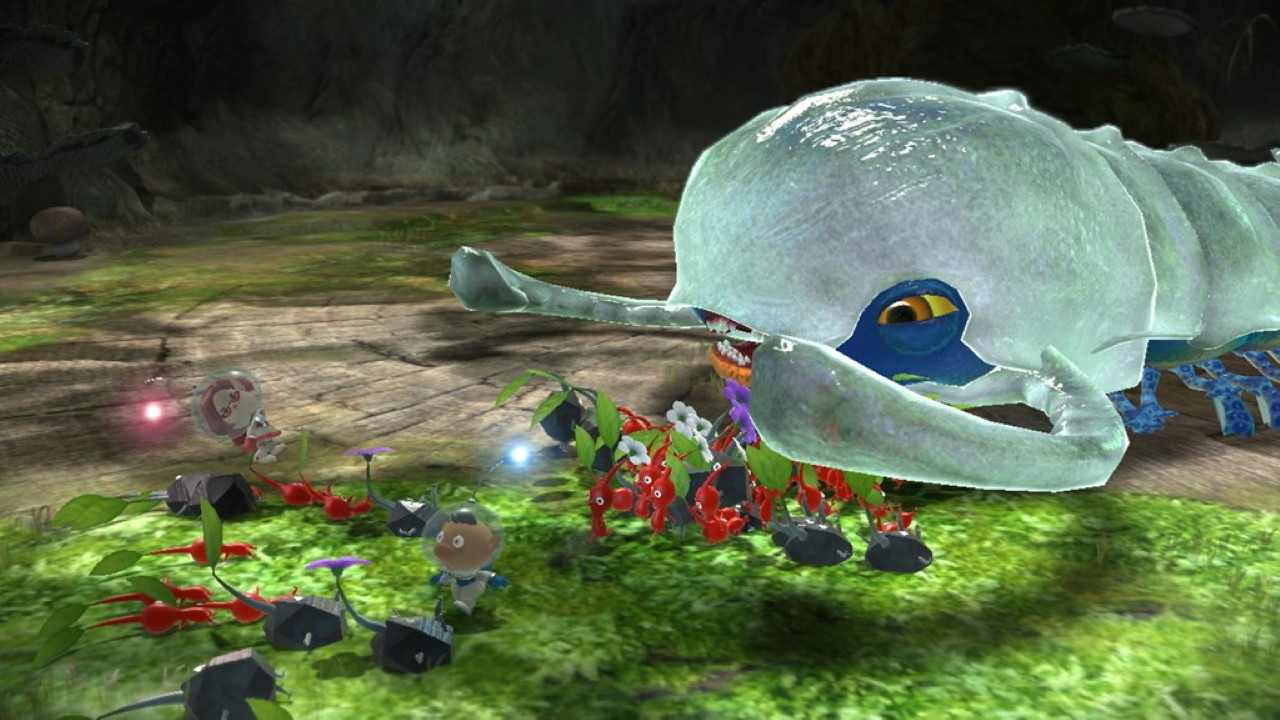 All of this adds up to Pikmin 3 Deluxe being an easy buy for fans who have unhooked their Wii U long ago. Newcomers also have something nice to play here, though it isn’t the best the series has to offer. Releasing as a full price release will scare some away, even with the game offering enough content to justify it to a degree. However, the value proposition would have been better as a trilogy release, or even just releasing Pikmin 1 & 2 instead, saving this for a future add-on. Still, the Pikmin series has been woefully underappreciated and under represented on Nintendo platforms, so any new addition is great for fans.

Pikmin 3 Deluxe is another successful upgrade of an already enjoyable Wii U release. The full co-op support is likely to be the biggest and best addition for most players, and if you can take advantage of it the game is a much easier buy. However, this isn’t the best the series has ever been and those issues still remain on Switch. Longtime fans will simply be exuberant that there’s a new Pikmin game available, but if the series never worked for you before then Pikmin 3 Deluxe won’t change anything. If this were a trilogy release or even just the first two games it’d be a home run. But it’s a solid hit anyway.