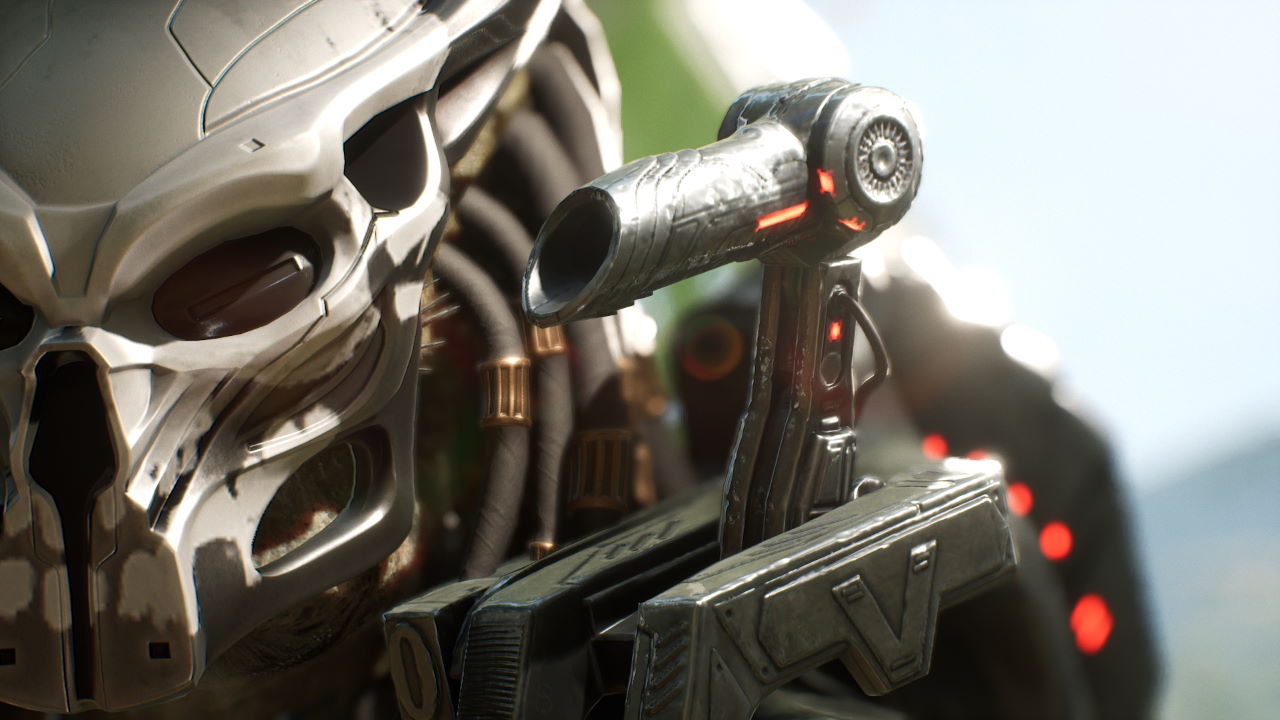 While the Alien series finally got its ultimate video game adaptation with Alien: Isolation, its cousin has struggled. Predator has been a cultural icon since it debuted in the eighties, and has seen a resurrgence in popularity lately thanks to memes and a few sequels. Those sequels never really captured the magic that made the original click though, but maybe a video game can succeed where they failed. Enter Predator: Hunting Grounds, which casts you as both the titular Predator himself and the lowly humans which he hunts. This assymetrical multiplayer action game looks to bring the feel of the original movie to the modern age. Unfortunately while it has the feel of that classic film down the quality feels more like the forgettable sequels that followed.

Predator: Hunting Grounds offers two distinct gameplay options. You can either play as a soldier on a team of four; wandering the forest, fighting mercenaries, and always keeping an eye on the trees for what might be lurking there. Or you can be the thing that is lurking there: the Predator. As a soldier the game operates pretty much like your typical run-and-gun action affair. You have objectives to complete all against a 15 minute timer. There’s AI enemies to fight, all with a decent assortment of unlockable weapons and gadgets.

Unlocking those items doesn’t take too long, but can feel like a grindy chore if you’re just wanting to have some fun. It’s also pretty astounding how much is locked away, especially the player classes that form the team dynamic Predator: Hunting Grounds relies upon so much. These classes aren’t totally unique, with just some stat changes between them, but it feels like more deliberation should have went into what was available right out of the gate. 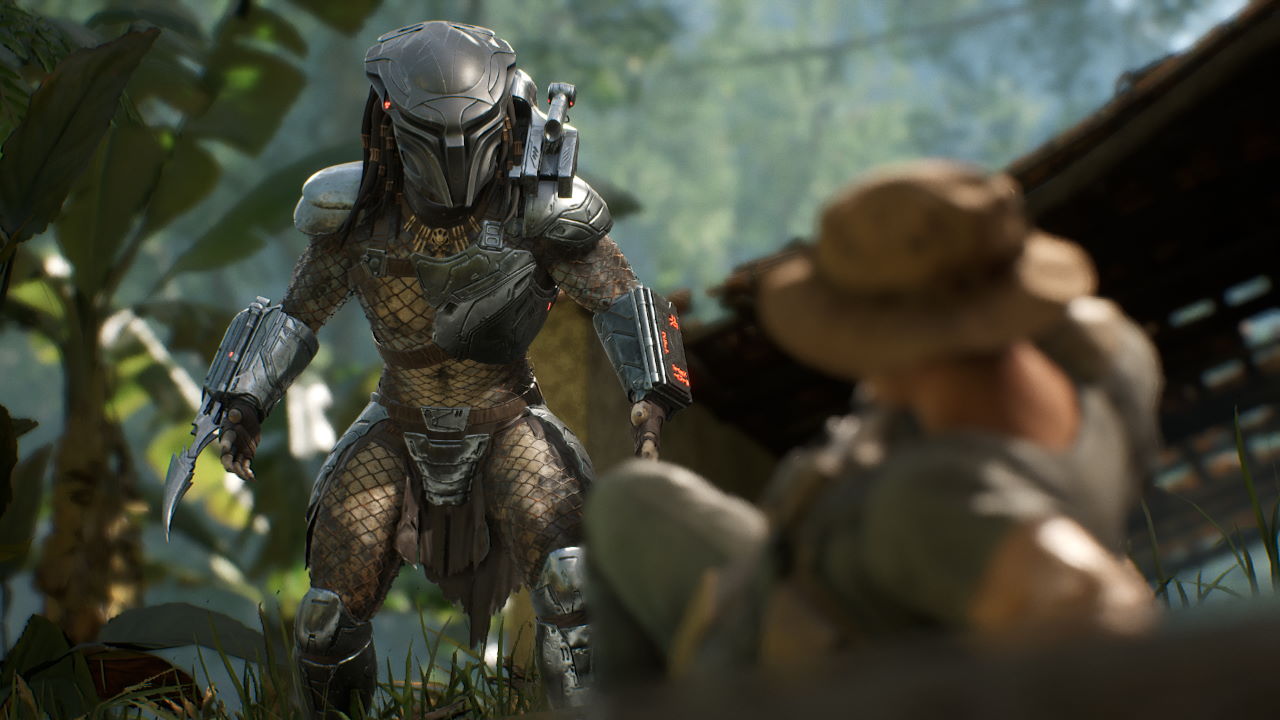 Once you embark on your journeys into the wilderness you’ll find a pretty rote action shooter at the core. Gunplay is not the best, but perfectly functionable. However, framerate troubles on PS4 (even on a Pro model) makes things feel much more cumbersome and unwieldy than it otherwise might. Your objectives are actually pretty interesting, and fit well with the overall feel of the game, but the shooting you do in between them is dull for one major reason: the AI is terrible.

Enemies in Predator: Hunting Grounds (at least the non-alien kind) are dumb as bricks and spawn in ways that are clearly artifical and obvious. They’re meant to be fodder; mere distractions to keep you busy while the Predator tracks you down and the real game begins. They could have been fun fodder though. But while dealing with all of this you know that the real foe is out there watiching you. Hunting you. And you can also play as that hunter.

The Predator has unique and powerful abilities, but they’re tacked onto a character that just doesn’t seem all that powerful

Being the Predator is clearly what most people will pick this game up to experience, and it doesn’t disappoint too much in that regard, aside from long queue times. As the Predator you feel powerful and menacing, haunting the human players from treetops while invisible, dropping in to cause chaos, or firing at them from a distance. But all of that presupposes that you actually find them, which can be the biggest challenge for newer players. The maps in Predator: Hunting Grounds are huge and there’s not much to distinguish human players from AI.

Using the terribly titled Predkour system, moving around is quick and easy, though it can create hilarious situations where you leap back and forth (nimbly bimbly) from tree to tree in an odd and repetitive pattern. Once you get the hang of it though, moving about is simple and actually quite fun. Finding players amidst the jungle and sea of AI enemies is challenging, but also feels like you’re truly hunting; trying to find the real prize trophies among the sea of unworthy prey. However, until you’ve unlocked some of the more capable Predator types and equipment, taking them on doesn’t quite feel as satisfying as you might expect. 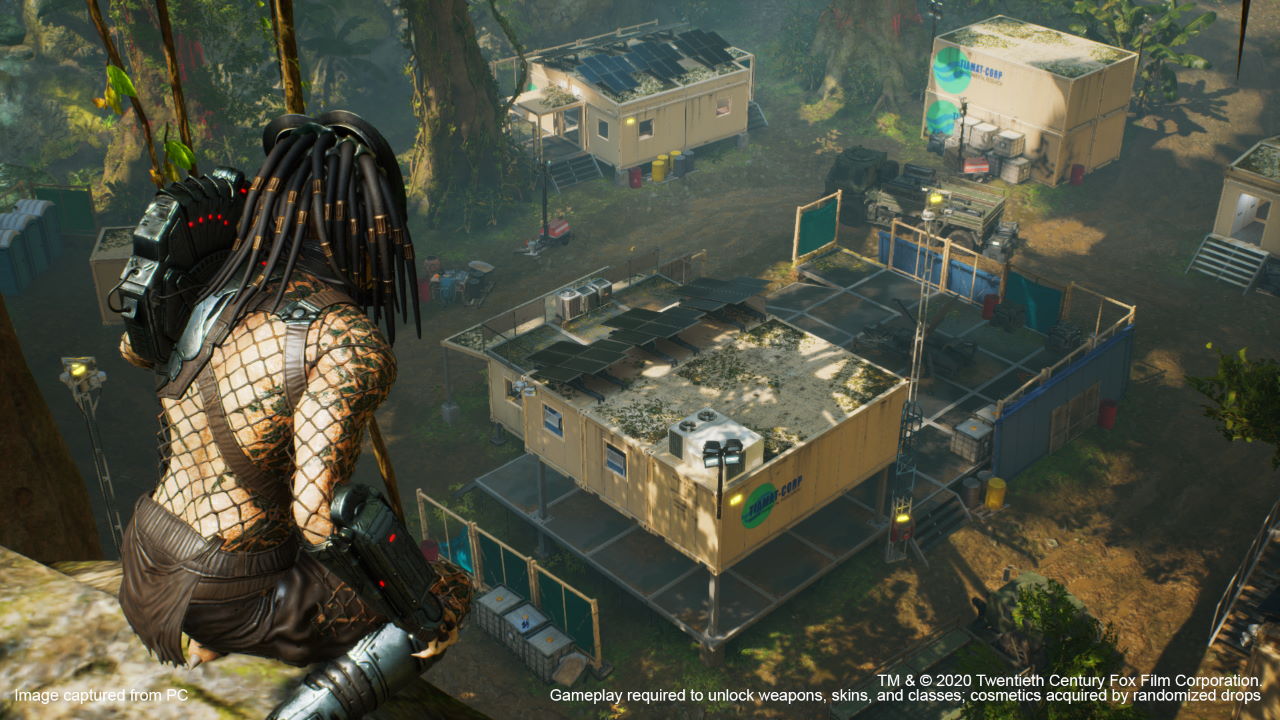 In the films, the Predator arrives and immediately changes the landscape of the fight. Battling humans is one thing, but an alien that seems to take people out in a second is another. In the game the Predator has unique and powerful abilities, but they’re tacked onto a character that just doesn’t seem all that powerful compared to his human adversaries. This does mean you need to think more strategically, peppering them with laser blasts or other unlockable weapons. Retreating when it gets too hairy, and moving in when a player separates from the group. But with skilled players these opportunities rarely come up, leading to boring matches that can end quickly.

On the flip side, new human players against a semi-skilled Predator can become a bloodbath. There’s a pretty set pattern when it comes to the release of a new assymetrical multiplayer game. The ideas are almost always interesting, as you may have felt reading the descriptions above. But once people get involved the ideas sort of fall apart. This is the case with Predator: Hunting Grounds as the balance never feels tightly controlled, like it needs to be. Once you understand the game, the Predator feels less like an imposing figure waiting in the shadows and more like a nuasance who pops up and either wipes out your team or gets destroyed rather quickly.

When the balance hits and there’s a back-and-forth battle between human and alien it can be exhiliarating. But this is exceptionally rare and often leads to split wins where some humans escape and others die, defeating the feeling of joy you should get out of a hard fought victory. Sure, you got some loot boxes and in-game currency (which is cosmetic focused only and not bought using real world money as of launch), but that adrenaline rush of pulling off a tough win is just lost in almost every match of Predator: Hunting Grounds.

With its limited map selection and strictly locked customization options, Predator: Hunting Grounds feels bereft of content from its opening moments to many hours into the experience. And given how repetitive the gameplay is, most players will give up before they open the game up to what it could become. If the gunplay had been tighter, or the Predator more balanced it would be worth the patience required. At launch though, Predator: Hunting Grounds feels like a rough and empty game that is held up by its adherence to the original film’s tone and atmosphere. But the overall quality hits more like the forgettable sequels, unfortunately.