The latest news in the world of video games at Attack of the Fanboy
March 22nd, 2015 by Kyle Hanson 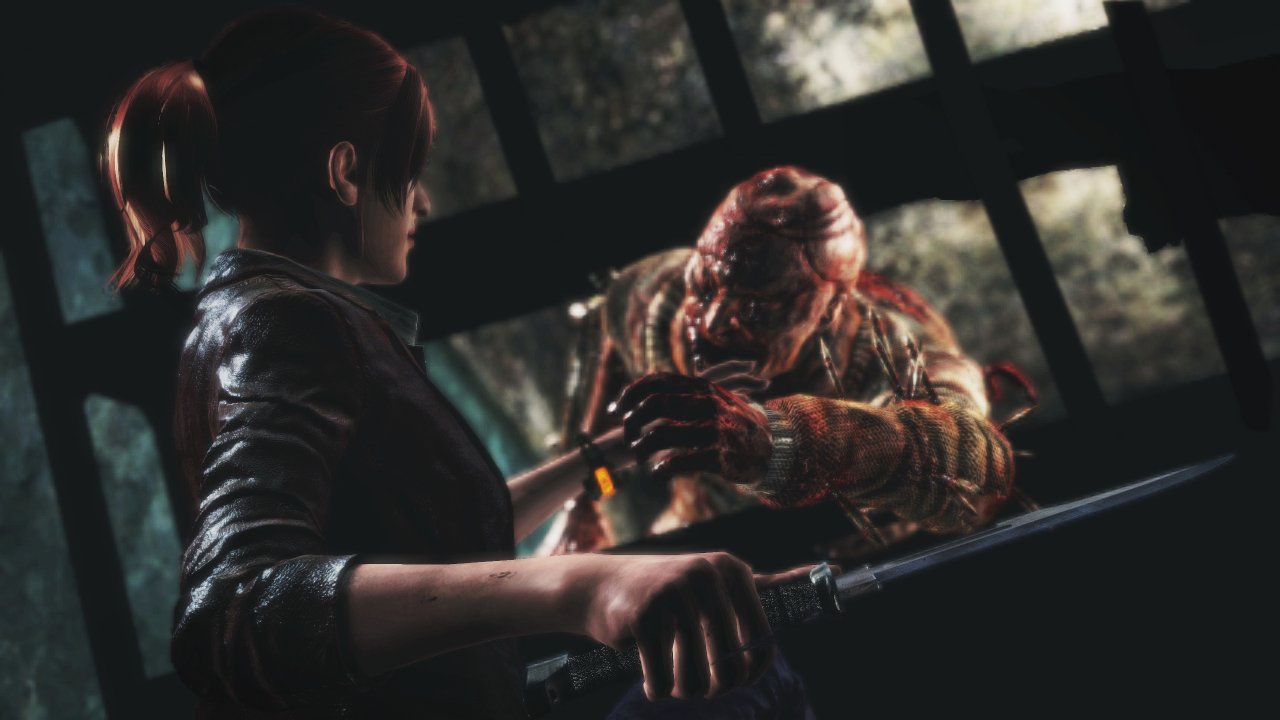 The Resident Evil series has, like many of its characters, went through a lot of transformation. The original game revolutionized survival horror, creating a template that would be used and copied for years to come. As the series progressed though, it began focusing more on the action side of gameplay. Characters were no longer at the mercy of more powerful enemies, and could run around firing off bullets like they were nothing special. This caused a backlash among many of the series’ fans, who wanted to bring Resident Evil back to its roots. This happened somewhat with 2012’s Resident Evil: Revelations, which tried to bring back some of the tension and suspense, but ended up still having a few issues. This trend continues, for both good and bad, with Resident Evil: Revelations 2.

Claire Redfield and Barry Burton make a return to the series, with the former finding herself stranded on a deserted island filled with biological monstrosities. Stuck with her is Moira Burton, daughter to Barry, who is afraid of guns and enjoys throwing out curse words at oddly inappropriate times. Together they’ll try to make it off the island, while figuring out why they were brought there in the first place. Barry, in a side adventure that you switch to halfway through each episode, is following in their footsteps, trying to find his missing daughter, while protecting Natalia, a little girl he discovered upon reaching the island. 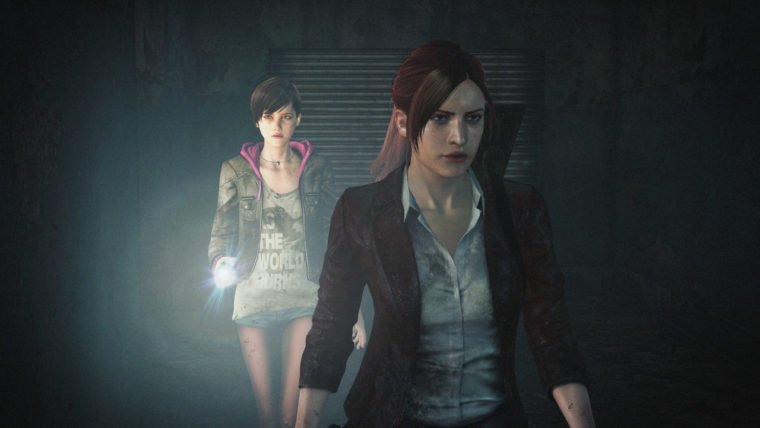 Resident Evil: Revelations 2 features similar gameplay to any of the more recent entries in the franchise. You run around, collecting items, managing your inventory, and killing monsters. There is some light puzzle solving to be found, but it certainly doesn’t feature heavily enough to please the longtime fans that this spinoff was originally aimed at. The atmosphere is definitely more reminiscent, at least at times, of the more traditional Resident Evil games though. A dark, dilapidated prison, a medlab hidden underground, and a slaughterhouse full of decaying corpses are just a few of the highlights.

However, if you’re looking for a tried and true survival horror experience, then Resident Evil: Revelations 2 is still not going to please. There are moments where it comes close, but the game still lets you feel too powerful, and lets you run and gun more often than not. This is definitely not Resident Evil 5 or 6 though, so it is still a step in the right direction if you’re looking for the classic RE experience, but keep in mind that it still isn’t there. Once you accept this, the gameplay is actually quite enjoyable. Moving around and firing off headshots feels good, and the weapon and ability variety allows for some interesting strategies to form. This is especially true once you level up your character and gain some of the higher level abilities and skills.

Resident Evil: Revelations 2 was first made available episodically, but has been pulled together into a single package for this release. Featuring all four main episodes, along with two extra episodes, and an additional Raid Mode, the package features all the content you could possibly ask for from Resident Evil: Revelations 2. Each episode lasts about an hour or two, with players taking control of Claire and Moira first, then switching to Barry and Natalia later on. This switch could have been an interesting dynamic as you are actually able to influence events in the latter part with your actions in the former. However, those differences are too subtle to really be noticeable during play, and having to traipse through the same area multiple times can get rather tiring. 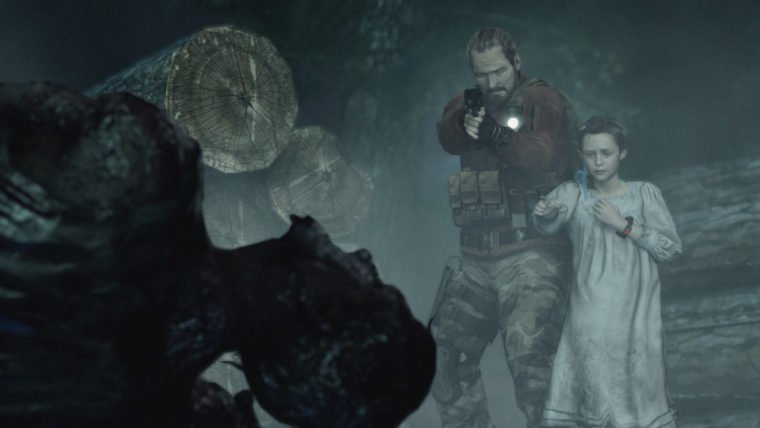 Within each chapter you can also switch between the two characters in your party. Each has special abilities that are required to proceed, which was fun the first few times it was needed, but began to wear thin as it became used more often. The worst parts are when the player has to split the characters us, using one to help advance the other, and vice-versa. Once you accept the need to switch between the characters so often it does take on an element of strategy. Some of the enemies in Barry’s portion of the game feature hidden weak points, which you can see if you are controlling Natalia. Switching to her, spotting the weakpoint, changing back, and taking them down quickly does offer some great fun, but again can become tiring later in the game.

Of course, you can avoid this by having someone else take control of the second character via split-screen or online co-op. Capcom, for some unknown reason, has been pushing for Resident Evil to be a co-operative experience. It works decently here, but any semblance of horror or suspense disappears the moment you have someone by your side helping you out. It sometimes feels like the Resident Evil series doesn’t know exactly what it wants to be.

This feeling continues with the story, which enjoys making unnecessary and forced callbacks to classic moments from the series. There are elements of mystery, scifi, and a few other genres all mixed together. Some of the underlying mysteries feel intriguing, but ultimately don’t go very far. The most annoying aspect of the story is that characters will learn information via papers scattered around the environment, but never actually retain this info, relearning it later as if for the first time. There is also no follow through on some pieces of the story, (slight spoilers ahead, skip to the next paragraph to avoid) such as how Claire and Moira are infected from the beginning but never work to cure themselves, even at the very end of the game. 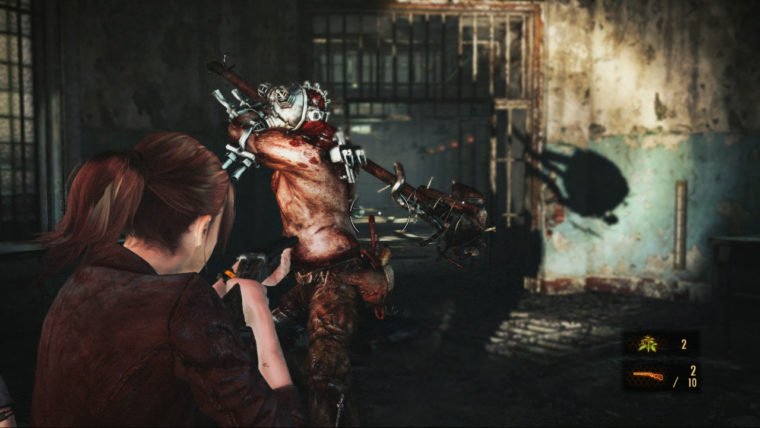 Outside of the story and gameplay Resident Evil: Revelations 2 is a mixed bag. The visuals are decent enough, but definitely show their lower budget roots. Playing on the current generation consoles or PC will up the framerate to a solid 60+ though, which is very welcome for a game like this. There is an overall lack of enemy variety, with the same types of monsters attacking you depending on the location. Their design can be interesting the first few times you see it, but as the game continues you will become tired of the same look and feel.

Environments are rather cliche for the genre, as you visit an abandoned village, a cliffside, and even a sewer. The worst offense for the environments, as previously mentioned, is that you have to play through them multiple times, once as Claire/Moira, and again as Barry/Natalia. Some extra work could have been done to change up the look and feel of the locations between the two timelines, or simply avoid so many repeat locales.

Outside of the main campaign is the Raid Mode, which will give action fans some additional enjoyment from the game. Essentially this boils down to running through static levels, taking out a certain number of enemies before moving forward. You can level up your character and unlock weapons, abilities, and cutomization options. It’s pretty standard stuff, but if you enjoy that type of gameplay it will keep you busy for a while. 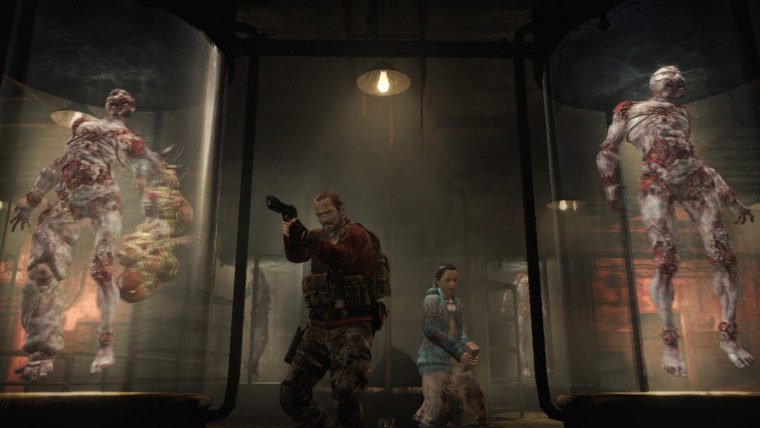 The two extra episodes feature some more experimental elements than the main story. The Struggle has you taking control of just Moira, who has gotten over her fear of guns somewhat. During the first part of the episode you can hunt for supplies, gathering both food and ammo for the mission ahead. Unlike all other parts of the game, if you fail here you will need to have food enough to allow a retry. If you don’t, your save is deleted and you start from the beginning. It’s an interesting twist, but the core gameplay remains largely unchanged, so it will only interest those that need something different to try out.

Little Miss puts you in the shoes of Natalia, shortly before she runs into Barry. Featuring some more dreamlike and surreal elements, Natalia goes on a quest to find her lost Teddy Bear. Travelling with her is “Dark Natalia”, an imaginary companion who can scout ahead without getting spotted. This episode is more stealth focused, mixing up the gameplay in a much bigger fashion than anything else in Resident Evil: Revelations 2. Whether you enjoy it or not will mostly depend on your patience level, as there is a bit of trial and error unless you take the time to scout every location with Dark Natalia beforehand.

Resident Evil: Revelations 2 is a mixed bag of survival horror and action gameplay that is enjoyable to play, but never hits the level of greatness that the series used to be known for. The episodic structure is an intriguing experiment, but its reliance on repeated locations will tire most players. In the end, you’re still running around blowing away giant mutated monsters though, so if that is appealing to you then it is worth a look.