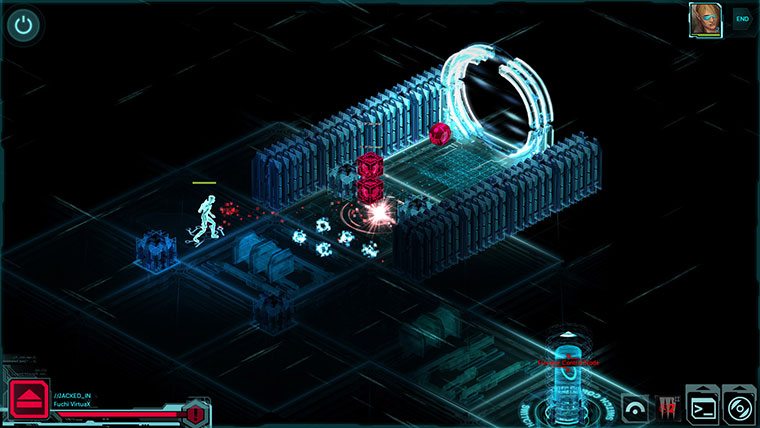 As one of the most successful Kickstarter projects over the past couple of years, Shadowrun Returns is one of the most highly anticipated games coming out of the crowd funding craze. Shadowrun fans turned out in droves to support the new project in 2012, pledging nearly 2 million dollars into this spiritual successor and revival of the series.  Shadowrun has been kicking around since the 1980’s.  Alongside its table top games,  it saw incarnations on the Super Nintendo Entertainment System, the Sega Genesis, Xbox 360, and now on the PC with Shadowrun returns.

The science fiction slash high fantasy world of Shadowrun is an intriguing one, it always has been.  It incorporates cyberpunk and fantasy into a world where magic exists alongside races like elfs, orcs, trolls, and dwarves.  But it’s set in the world that we live in.  This dystopian Cyberpunk future is one where the world’s governments have collapsed and corporations have taken over.  It’s a world where it’s inhabitants are both able to harness genetic or cybernetic enhancements, as well as magic.  And it’s one where you take control of a completely customizable Shadowrunner tracking down a mysterious killer in the lawless underbelly of Seattle circa 2055.

Shadowrun Returns is the spirtual successor to the early days of Shadowrun games.   This is certainly not your little brother’s Shadowrun, which recently saw a revival as a class-based shooter on the Xbox 360 and PC.  This is a game with a much slower pace, with a deep and interactive storyline that is penned by those who know the world best.  It’s a game that relies on heavy player customization and dialogue choices for a wide variety of ways for your Shadowrun adventure to unfold.  And while the game’s visual palette, thought provoking narrative, and interesting characters are enough to keep you engaged from the very beginning, it’s also a rather robust turn-based combat game and can be compared to the likes of Xcom: Enemy Unknown in this regard.

Harebrained Schemes serves up an impressive package of meticulously crafted environments, delivered in the three quarters isometric viewpoint that so many games of this type use. Environments are heavily detailed with what appears to be hand drawn art at every turn. The combination of this well realized world that can be downright beautiful at times, and a story that introduces you to a number of colorful characters, makes it hard not to get sucked in by Shadowrun Returns from the very, very start of things. However, Shadowrun Returns is very basic game on the outside; the game’s finer points are found in the little things. Players are constantly pointed to checkpoints and waypoints to aid you on your mission to find a friends’ killer.  Digging for details small and large, it’s the conversations that really make the world come alive without a line of spoken word.  Those who choose to take on the title should enjoy a bit of reading, as the games entire story is told through text trees, and contextual information in the environment. Shadowrun Returns is certainly not the AAA, Hollywood voice acted, bombastic action that you find in a lot of games these days, and it doesn’t really need to be to be enjoyable.

Basic on the outside, Shadowrun Returns is as deep as they come in customization features

And while basic on the outside, Shadowrun Returns offers a wide array of customization options in its characters and combat, giving it depth that some turn based combat games lack. Shadowrun Returns allows players to customize their characters in a number of different ways.  From the get go, players can select from a variety of different races which range from humans down to dwarves, with trolls, orcs, and elves in between.  Each race has distinct characteristics that effect the way that you can interact with the world.  NPCs will react to you differently if you’re a more likeable race, which makes any given game playout significantly differently in its tone, even if it’s ultimately a linear quest you are undertaking.  But players can also choose their character specialties.  These range from combat mages and shamans who can summon creatures and cast spells, to hackers and deckers who rely on technology to win battles.  Mixing and matching the different classes and races can be a fun experiment to see just how differently the game plays out with the different characters.

The turn-based combat of Shadowrun Returns is also impressive, for a game of this scale.  The combat will keep you on your toes once the game takes the training wheels off, and like many games of this type can be rewarding as a methodical and tactical gameplay experience. Players will utilize cover and character strengths to bypass enemies, and many times in the game the player controls groups of Shadowrunners in teams which can be put together through a for hire system, which revolves around the game’s main black market home base. Depending on character race and specialty there’s a large system of customization for players to explore and use. Player appearance and attributes can be altered through a karma system, which is rewarded for just about every in-game action and decision that you make.  Players assign these karma points to their skill tree and this pans out at player discretion. Just how you mold your Shadowrunner is up to you, and gameplay will vary accordingly. 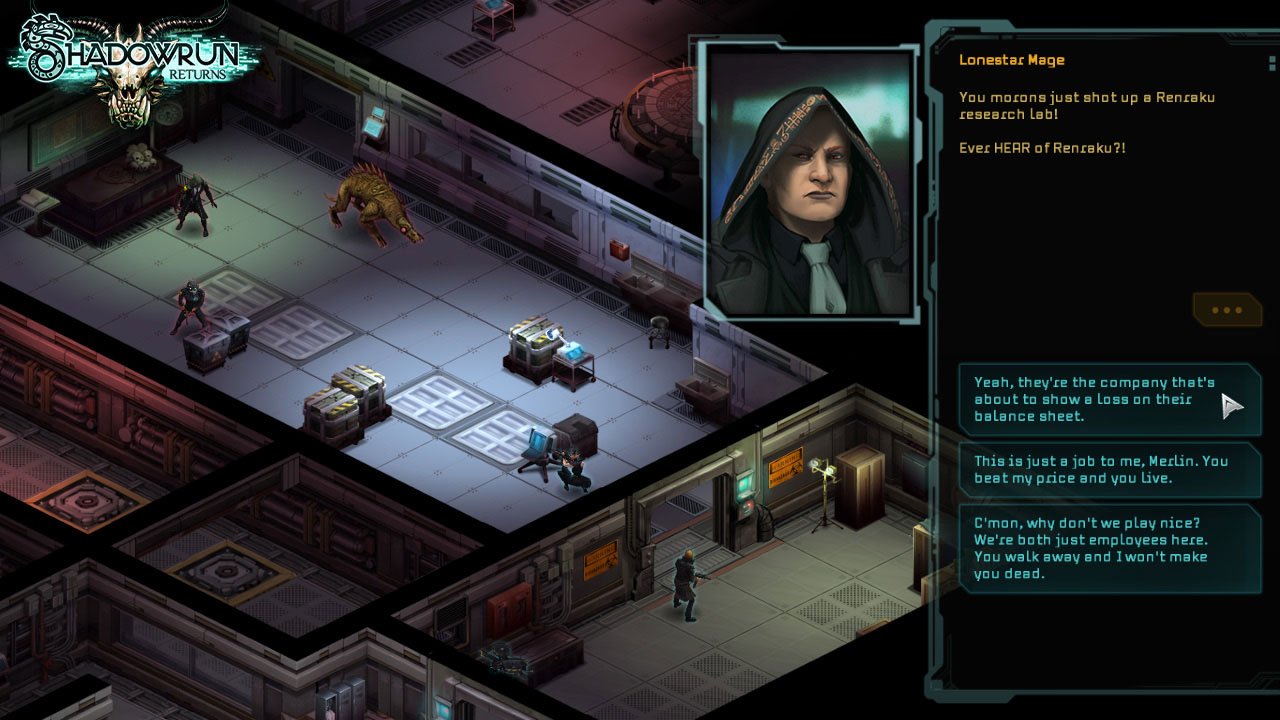 Shadowrun Returns is best described as interactive fiction where its turn based strategy elements solidify it’s classification as a video game. It has the obvious ties to the table top experiences of its origins, but it does have more than enough game and story to keep you digging deeper into this mysterious world. This goes double for those who don’t mind a good read. While many games have put text-driven adventures in the rear-view long ago, Shadowrun Returns proves that you don’t necessarily need to drop a hundred million dollars to make a game that is oozing with the style, fun to play, and able to hold your imagination captive for long stretches. The devout Shadowrun faithful won’t be disappointed with this storyline, “Dead Mans Switch” is the initial campaign and its more or less an extension of the 16-bit era, uprezzed and polished to the brim.  When it’s all said and done, players can hit the game’s included story and map editor to make brand new adventures in the Shadowrun universe. This editor is not for the faint of heart however. It’s a complex tool that is capable of making, well, a completely different Shadowrun Returns game. This isn’t an editor of the likes you’ll find in simple user friendly forms. This is an editor that’ll require some time and learning to make good use of, but once the Shadowrun faithful descend on this element of the game, it will be interesting to see what new adventures await.

Shadowrun Returns is the type of game that has long been abandoned by the mega-publishers of the gaming landscape. It eerily feels like the Shadowrun games of old (shooter excluded), though it’s noticeably more polished and has a coat of visual and audio gloss on it that lets it stand shoulder to shoulder with anything being released in proximity. For the uninitiated, Shadowrun Returns will be a brilliant introduction to one of the most imaginative works of fiction that has ever graced the gaming world. Newcomers will surely need to put some time in to get up to speed, but this game makes this pretty easy to get sucked in to the universe right away.  Sure, because of the type of game that this is, it won’t be for everyone, but this is Shadowrun at it’s finest, and it never has been.