Roguelikes on the go are so good, and Slay the Spire is no exception. Published by Humble Bundle, Slay the Spire needs no introduction. It was released back in 2019 for all major platforms, with a later iOS release on June 2020. An Android release was also announced a while back, and finally the game is up and running, with a launch date of February 3, 2021. Granted it started off slow, Slay the Spire really picked up interest as time went by, to eventually being the second best selling game on Steam, while still in early access.

Classified as a mix of card games and roguelikes, Slay the Spire delivers on both sides and the result is an undeniably great formula for players who want to either spend lots of hours into the game, or simply pick it up and play for a run or two. Originally being available only to consoles, this was not as easy as it is now with this Android release, hence making the title a fantastic portable application. iOS users could of course play the game up until now, but the community of Android users is equally big, eagerly waiting to get their hands on Slay the Spire on the go. 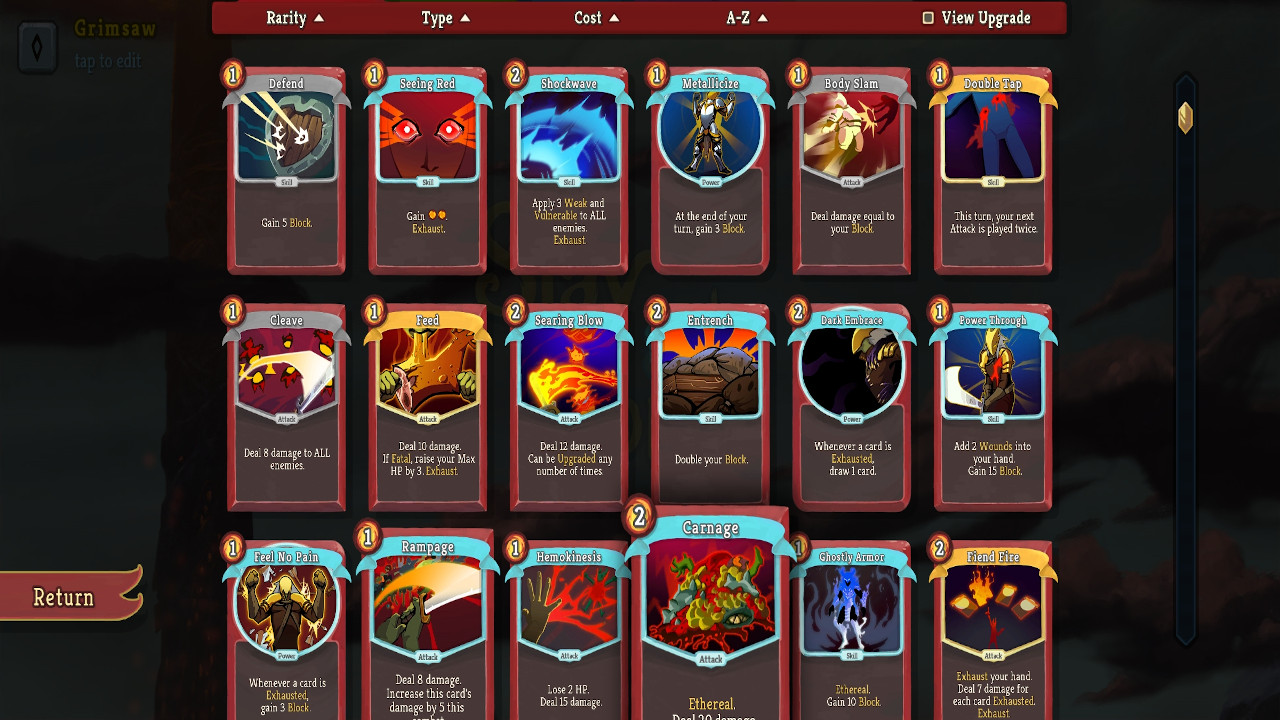 The focus here is to craft unique decks, themed around the 4 playable characters that exist in this mystical universe. Fight against complicated monsters and of course, climb the Spire. Which is the main goal of the game, with each time being a completely different run, as the layout changes every time you start your journey. Procedurally generated maps and roads are of course present, as you would expect from a roguelike, so rest assured you won’t be having the same experience twice.

As you traverse through the map, you can select which path to follow. The whole map is visible the moment you start your run, therefore veteran players can plan ahead for some interesting results. You can encounter monsters in turn based combat, find merchants to buy items from them, rest areas where you can upgrade your cards or simply rest to refill your HP, and many more activities for you to explore and find.

While doing all of the above, you find new cards to add to your deck, items like potions to help you in battle, and the very important Relics, that can be be really impactful at times, with varying effects. You can claim multiple goodies after you beat an enemy, alongside a card pull. You get to choose from 3 options, or simply skip the whole process. As the game literally says to you, it is not always beneficial to grab a card.

The more you progress through the map, the harder every enemy and boss gets, but of course with more rewards to provide. Even if you end up failing a certain map, with monsters knocking you out, you do get EXP points to unlock certain rewards, as in new Cards and more.

Four Characters to unlock and fast paced Card Combat on the go. 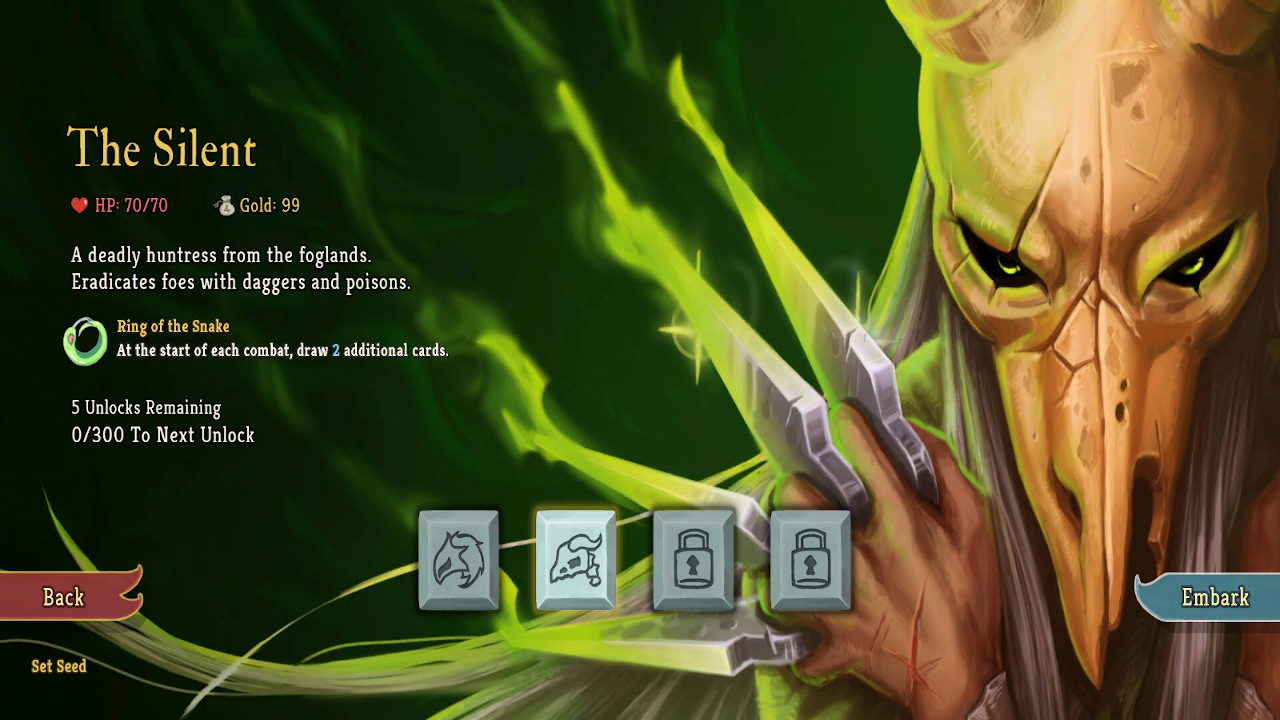 When you first start the game, the only available character is Ironclad, a knight-like fighter with balanced offense and defense. Completing a run with Ironclad (failing the run also counts as completion) will unlock the venomous Huntress, and completing a run with her unlocks the automaton Defect in return. Since the last character is unlocked by actually beating the game once, we won’t spoil it here.

Each of those unique characters has a certain type of deck with them, accompanied with different abilities. Huntress for example starts her first turn with 2 extra cards, and so on. The possible combinations of Cards, Character skills and Relics are literally endless, which is a good thing and in fact the main catch of the game. 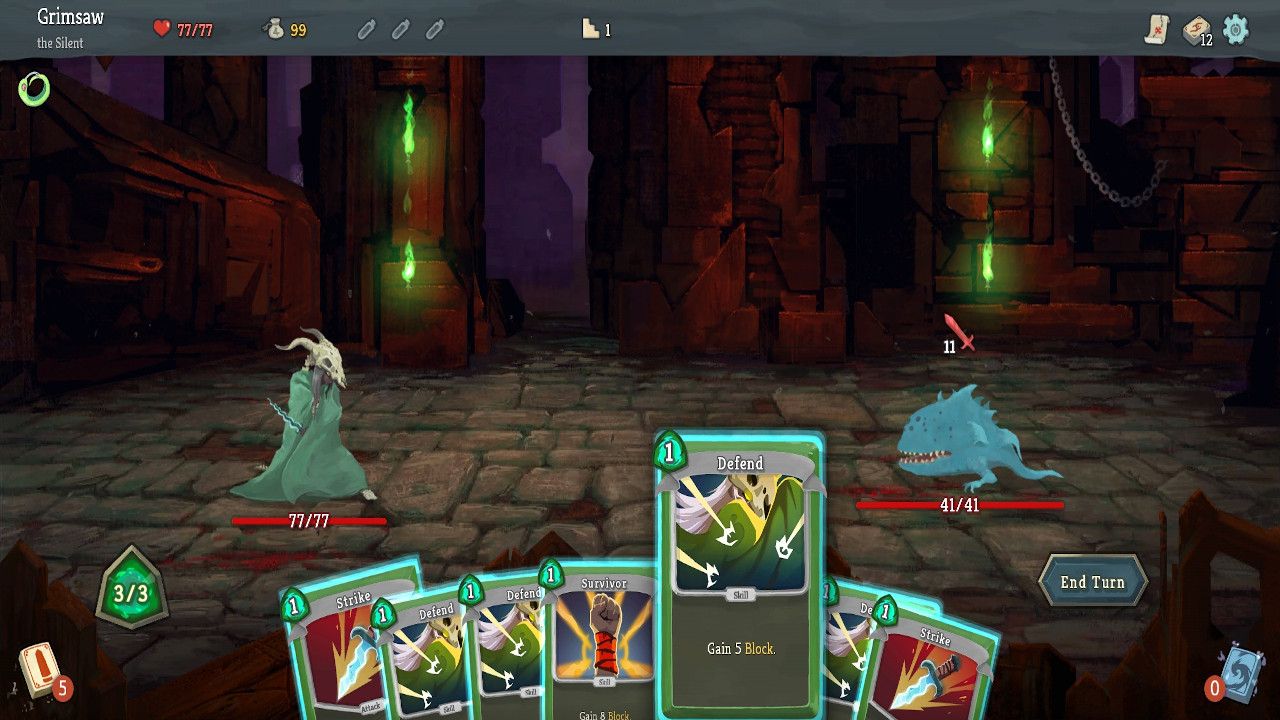 This loop of starting over and over with different decks and finding new Relics in the process, is what made Slay the Spire so addicting in the first place. It is no wonder why so many game developers tried to copy this formula, others with success and others not really, as it is so easy to implement, but rather hard to execute correctly. Taking this in consideration, attaching this playstyle to a mobile device, is simply a recipe for success.

The game itself runs perfectly in pretty much every device out there, as its requirements are so minimal. It is indeed a perfect match for the specific player base, and with customized interface to adapt to a phone’s screen, you are already in for a treat.

Are you waiting for your bus to come? Perfect, boot up the game and start a run with Ironclad. Is the bus already here? No worries, simply click on the ‘Settings’ icon and choose Save & Exit. The game will automatically save at the exact same spot you pressed the button, so you can continue whenever you feel like it. Easy as that, with no trouble at all, and without the fear of losing a perfectly good run.

As in the console entries, the combat is exactly the same, with only difference being that you just drag the card on top of enemies to use them. Which brings us to the only downside that I can think of about Slay the Spire. The interface could be a little more ‘mobile’ friendly, since picking cards is sometimes a little janky. The text of the whole UI is also a little on the smaller side, but after a while playing you barely notice it.

Something that I found interesting in regards to this mobile port, is that I appreciated the music of the game way more than when I experienced it in my Xbox, back in the day. I could only think of one reason why that is, and it seems that I was truly immersed to this world due to my headphones. I barely wear them when I’m playing on a console, but this time because of them, I really listened to the perfect ambient music of the game, and it further enhanced my time with it. I didn’t notice it at first, but the developers made an excellent and fitting background loop for each act. Especially the theme of Act 2, really dragged me into this world.

To put it simply, if you liked Slay the Spire on consoles, there is nothing not to like about this release. Seriously, the game was meant to be played on a mobile device, without even hindering the console entries. They are equally enjoyable, depending on what you are looking for. Spending a couple of hours on the couch, or some short game sessions? Both cover those needs, and for the price of $9.99 on Android, it is certainly worth every penny.

Let me add as well that while cross-save is not present, cloud saves are indeed a thing and you can transfer progress between mobile devices with ease. Your console or PC progress will have to stay where they are, but hey, that’s not a bad thing. You just have one more reason to play in both platforms!  The UI may seem troublesome at times, but the moment you try it on Android, it is unlikely you will go back to a console for it.  Slay the Spire is available now on Android and all major consoles, including PC.