The latest news in the world of video games at Attack of the Fanboy
October 16th, 2017 by Kyle Hanson 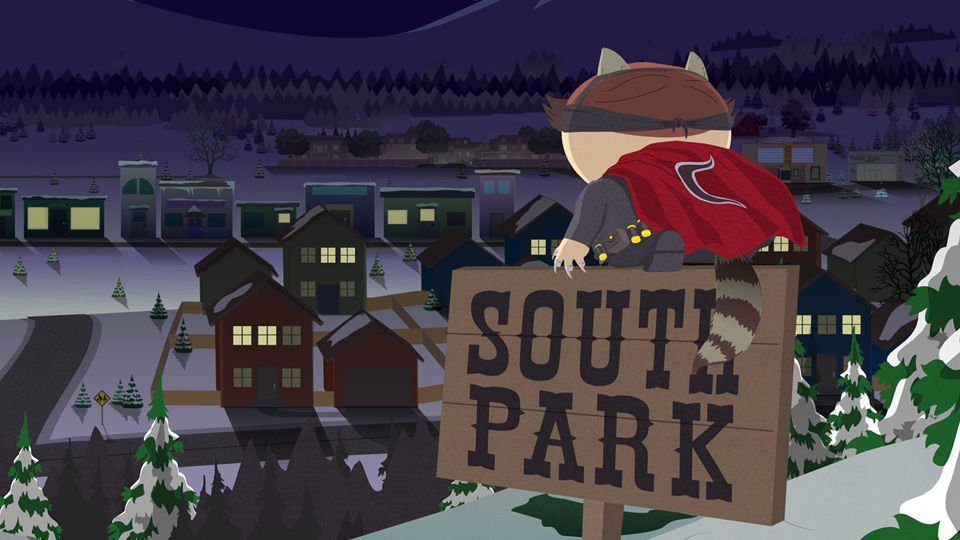 There’s a reason that South Park is still so well respected over twenty years after first gracing the airwaves. The show is always outrageous, always satirical, and always interesting, even when it does flub an episode (or a whole season, as we saw last year). And yet the franchise has always struggled to have a solid video game, until South Park: The Stick of Truth arrived in 2014. Now, three years later, we finally have the followup with South Park: The Fractured But Whole. Coming from a different developer, it would have been easy for this game to fail. Instead it shines once again, offering the same quality South Park experience, with a superhero twist.

Following the events of The Stick of Truth, The Fractured But Whole once again has you playing as “The New Kid”. While you fought hard to become king in the fantasy world created in the first game, all of that is quickly tossed aside as Cartman and the others shift to the much more popular superhero genre. Cats are going missing en masse throughout the town of South Park, so Coon and Friends are on the case. As The New Kid you will join their ranks, choose your super powers, and help deal with a brewing Civil War between The Coon and Professor Timothy’s Freedom Pals. And just like last time, it’s clear early on that there’s more going on here than just some missing cats and kids playing superhero. 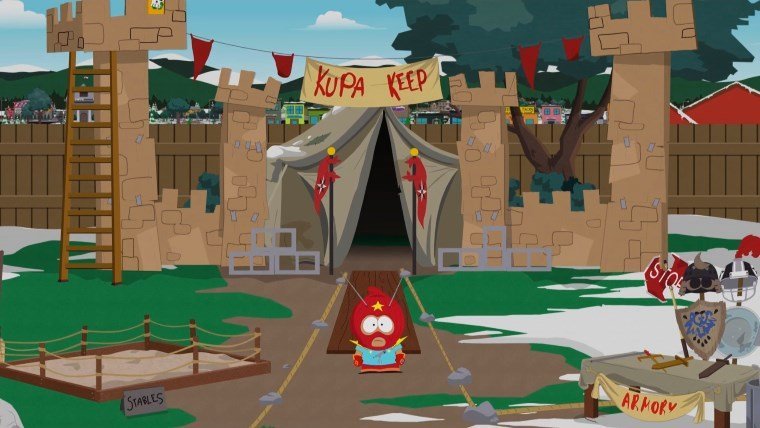 South Park: The Stick of Truth was a near pitch perfect licensed title. Not only did it deliver the look of the series, it also gave fans a true South Park style story to play through. The gameplay, based around some loose RPG mechanics, weren’t rock solid, but they kept everything running while you enjoyed the fantastic script, authentic world, and colorful characters. South Park: The Fractured But Whole essentially accomplishes the exact same thing once again, marking either a perfect sequel, or a dull retread, depending on your own feelings toward the series.

South Park: The Fractured But Whole is one of the funniest games ever made

That’s not to say there’s nothing new here. In fact, Ubisoft has tinkered with the formula a bit more than many might have expected. It would have been easy to just take the engine from The Stick of Truth, write a new story script, and pop out a brand new title. Instead they rethought combat and shifted a lot of the core mechanics around. It’s not a night and day difference, and casual observers might struggle to pick out which game came first, but it’s enough that those seeking more than just a Stick of Truth rehash will be satisfied.

Combat is turn-based once again, and the core of the game is still set on RPG mechanics. You’re able to increase and decrease your stats as you level up and unlock slots for certain items. What’s changed is how combat feels, and the strategy you have to implement. The whole field of battle is now a grid, and your abilities will impact certain squares, or areas of the arena. Your own positioning, as well as that of the enemies, is also important, and players have various options for getting around, or shifting where enemies are in relation to the good guys.

All of The New Kid and his friends’ abilities are based around their super powers. You can choose between three main powers at the beginning of the game, and many more later, mixing the choices to form your four move set. Moves each have different effects, and every hit will feed into your Ultimate, which is unique to each character and class, making for more variety and strategy choices. Following the turn order is key, and later into the game you’ll earn abilities that can alter it to your liking. 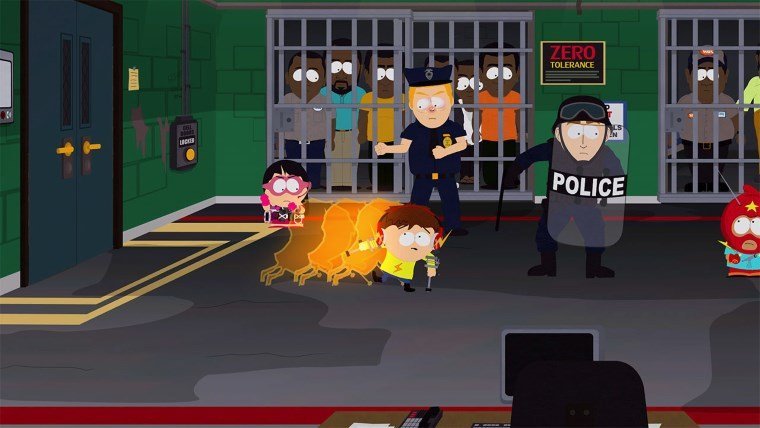 The overworld is pretty much the same as The Stick of Truth though. The player can explore the town of South Park, and a few areas beyond, solving puzzles, finding items, and fighting enemies all along the way. As the story progresses, more of the map is opened up. A fast travel system helps you get around but it feels a bit underdeveloped, with the player having to walk quite a ways to find the nearest one on occasion.

The overworld could also use some retouching in regards to its paths, which can often be confusing due to the 2D nature of the aesthetics.Fans of the show will be delighted to see everything updated to remain current. You’ll be able to explore Shi Tpa Town and other recently featured locations, with the characters all updated as well to match their current situation in the show.

And that’s the real draw of South Park: The Fractured But Whole, the world and the story. The writing in this game is superb, offering hilarity throughout. It’s rare that a game gets me to actually laugh out loud, yet I’ve done it multiple times while playing The Fractured But Whole. And the audacity that is shown in the story is delightful, featuring truly outrageous moments that shouldn’t be spoiled. If you’re a fan of South Park and were worried that they’d tone down the insanity, fear not. If anything, the game has allowed them to be even more out there with their humor, with lines crossed that Comedy Central would likely balk at. 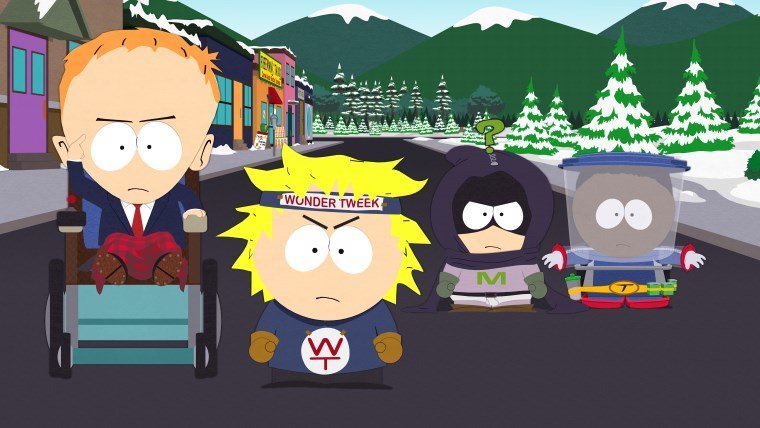 The switch to superheroes was genius as well, opening up the satire quite a bit. There’s already been a few episodes of the show featuring the antics of Coon and Friends, and they’ve all led to this game. Everything comes together to make for an authentic South Park experience, and it’s clear that Matt Stone and Trey Parker are completely free to say, comment on, and do whatever they want with this story. The end result is one of the funniest games ever made, and one that has a lot to say about the world and the current cultural obsession with superheroes.

But that story does rely on the gameplay to keep the player interested for the surprisingly long runtime. The gameplay is enjoyable, but it’s simplistic, and it’s held back by a dreadful inventory system that is best ignored until it’s absolutely necessary. Some side quests will help keep players engaged when the story is winding down, but if you are looking for a deep RPG experience, The Fractured But Whole won’t satisfy your craving. Instead it’s a game that delivers a genuine South Park adventure with a streamlined set of mechanics to facilitate that. It’s a fun game, but nothing really special until the story kicks in and you laugh like crazy at the glorious humor and satire on display.

South Park: The Fractured But Whole doesn’t remake the wheel that The Stick of Truth crafted so well. The first game made for a near perfect South Park experience, with bare bones RPG elements to make it all work. This sequel does mostly the same, only tinkering with a few things, making for a different but just as enjoyable final product. Those who don’t find South Park’s particular brand of comedy endearing will likely find little to enjoy here, but if you loved the first game, you’ll love this new one just as much. And if you’re a South Park fan who hasn’t played either, then you need to fix that ASAP.

South Park: The Fractured But Whole