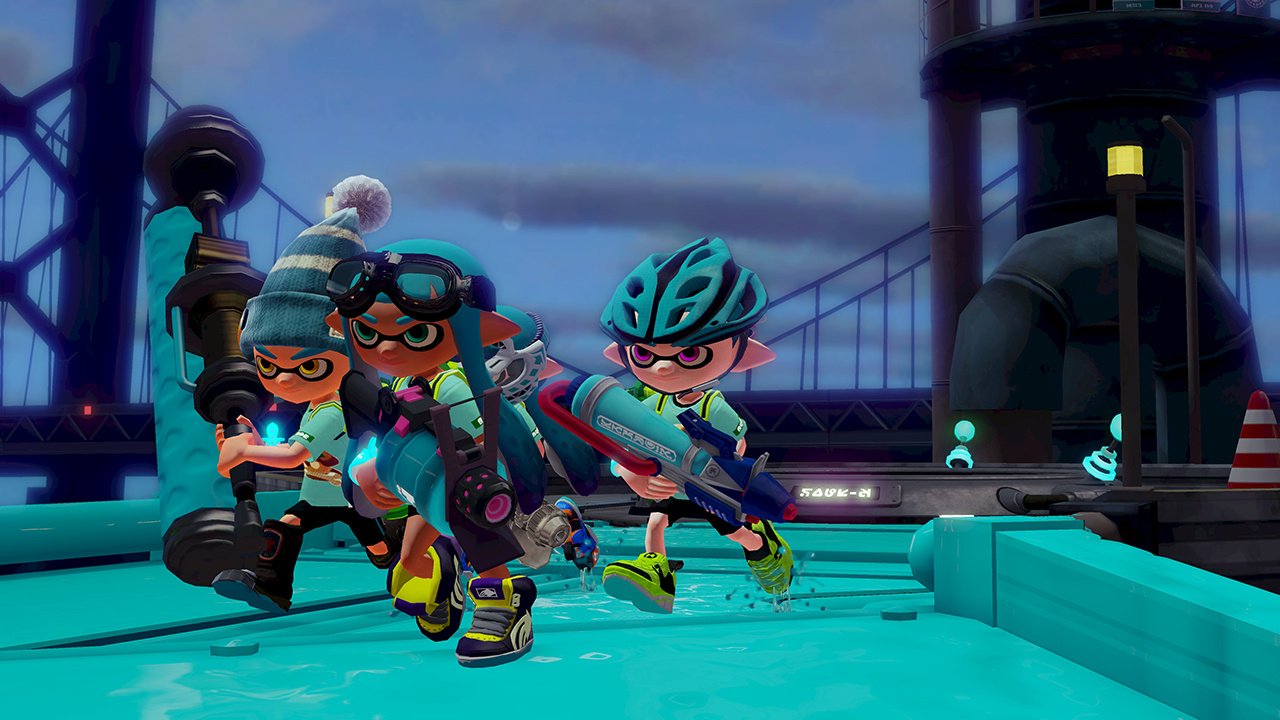 A new Nintendo IP doesn’t come around all that often. The 100 year old company has produced some of the most memorable worlds and characters in gaming history, so whenever new ones are created, people pay attention. This is what happened last year when they unveiled Splatoon, Nintendo’s take on the third-person-shooter genre. Interesting characters populated a colorful world, and looked to offer a new take on standard shooter gameplay mechanics. But could Splatoon hold up to the promise? Could Nintendo take their signature innovation and apply it to the third-person-shooter arena? Thankfully the answer is a resounding yes, even with a couple of decisions that hold the experience back.

Splatoon features the usual Nintendo story, where you are in a world that barely makes any sense, yet comes together in some magical way. You play as an Inkling, a boy or girl who can change into a squid and swim through ink. Inklings are at war with the octopus army who have kidnapped the…you know what, it doesn’t really matter. You shoot stuff and they try to shoot you, but with ink instead of bullets. 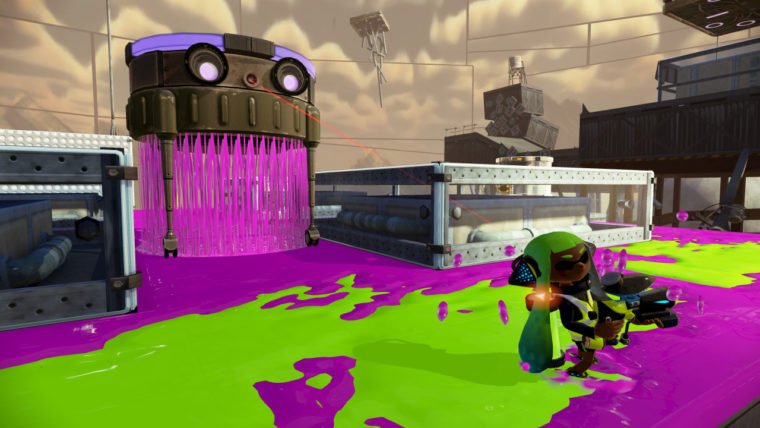 The single player portion actually plays out more like a platformer than a standard shooter game. You will have to use your ink to traverse the 20+ levels, attacking enemies, but also trying to figure out the right path to the next area. It has the feeling of Portal, mixed with parts of Super Mario Galaxy, and maybe a little bit of Gears of War. The various enemy types will keep you on your toes, with some taking a decent amount of strategy to take out. Once you figure out how to best utilize your ink, swimming through it and popping out at the last second, or using it to cut off enemy movement, it becomes easier, but never so easy as to feel boring.

There are five worlds in total, each of which contains multiple missions, culminating in a boss battle. These boss battles are one of the easier aspects of Splatoon, with most players being able to take them out on their first try with little in the way of strategizing involved. However, they are pretty fun showpieces that offer a bit of variety to the game. The real challenge comes in finding all of the Hidden Scrolls, which are contained inside the single player missions. These collectibles are quite important to the overall game, so finding them should be a high priority.

The single player mode contained in Splatoon is great fun that will keep players engaged for a few hours. The big draw though comes in the multiplayer, which pits two teams of four against each other in arena style combat. This isn’t just a regular shoot-em-up however. In true Nintendo fashion, they have taken the mechanics of a third-person-shooter and thrown in their own twist on the genre. 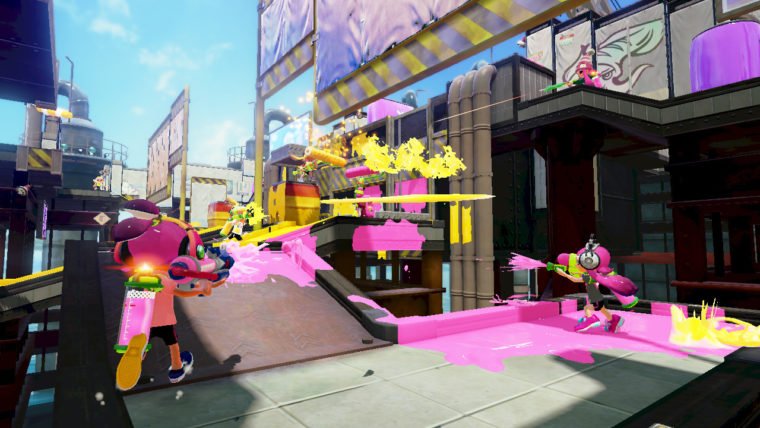 As you play against others online you can, of course, shoot them, causing them to slowly respawn at their base. However, this isn’t the main goal of the game. Instead Splatoon requires you to maintain control of the map, by covering it with your team’s ink. There are two gamemodes available in Splatoon’s online multiplayer, Turf War and Splat Zones. Turf War will be where most players spend their time, as it is available in the regular multiplayer area. This is the standard mode where teams win by having more of the map covered. Splat Zones, which is available in ranked online matches, is a slight change as it tasks teams with covering only specific areas, sort of like King of the Hill.

No matter which mode you play, having the map coated in your team’s ink allows for faster travel, as you swim around in squid-form, but it also is the main decider as to who wins the game. It’s a seemingly small change to standard shooter mechanics, yet it alters the gameplay in significant ways. Those who just go around looking for combat, and trying to take out enemy Inklings will find that they are low on the scoreboard and aren’t really helping their team all that much. Figuring out the right paths to take, covering ground as you move and stopping enemies from taking over sections of the map is the real way to go. Teams that work together, securing areas of the map, while keeping the enemy busy will thrive.

Unfortunately, working together will be a difficult task as Splatoon infamously features no options for voice chat. It’s an odd choice on Nintendo’s part, but not wholly surprising given their track record with online options such as this. Other areas of the game seem limited as well, such as the aformentioned two gamemodes. Disappointingly, local multiplayer is limited to one-versus-one matches, with no splitscreen option for online battles. There are also only five multiplayer maps at launch. Compounding this is the fact that players can’t choose what map to play online, instead having to bounce randomly between two pre-selections every four hours. In actual play, this limitation wasn’t as bothersome as it might sound, mostly due to the five maps all feeling fresh and quite different from each other, but for those that get stuck playing all of their matches in the same four hour window, having to play on just two maps might get tiresome. 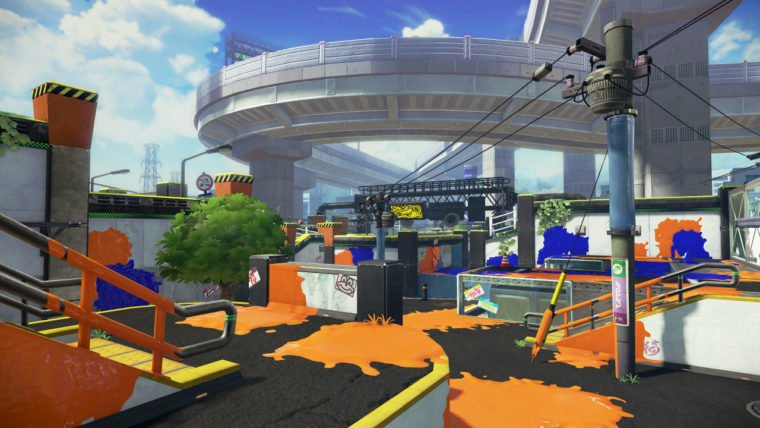 Luckily these limitations don’t extend to other areas of the game, with character customization and the overall technical landscape standing out as particular strong points. Inside of Inkopolis, the main hub of Splatoon, are shops where you can purchase clothing and weapons for your character. The items of clothing all impact the game in different ways, with power-ups that can save you ink, raise your attack or defense abilities, or just look really cool on your Inkling. By equipping and playing with different articles of clothing you can level them up, unlocking more power-ups for use.

The weapon selection is also quite robust, with three main categories being split into a wide variety of weapon types. You can select a roller, which covers the map quickly, but has little to no ranged combat ability, the shooter, which works like a standard assault rifle, or the charge shot, which is sort of the sniper class. Each weapon has its use on the team, and the rock/paper/scissors way that they can beat each other keeps the game from getting frustrating. Rollers might feel overpowered if they get in close, but at just a few paces, any other weapon can take them out with ease. And if you can’t figure out the best way to use the starting weapons, you’ll unlock other varieties later, all of which fit into the three categories, but can differ greatly in their implementation.

On top of all of this is one of the best looking and sounding games on the Wii U. Nintendo has always had a knack for pushing their own systems to the limit, and Splatoon is yet another great example. Everything in the game, aside for Inkopolis which had some framerate dips, is presented in 1080p at 60 frames-per-second. The high framerate allows the multiplayer to feel fast and responsive, with the motion controls working fantastically well for precision shots. The overall design looks gorgeous in 1080p, with Nintendo’s trademark color and style standing out as truly refreshing. Of course, when looked at closely the cracks can be seen, but overall Splatoon is a great looking game that runs exceptionally well. The upbeat and enjoyable soundtrack is the icing on the technical cake, with many tracks becoming fast favorites. 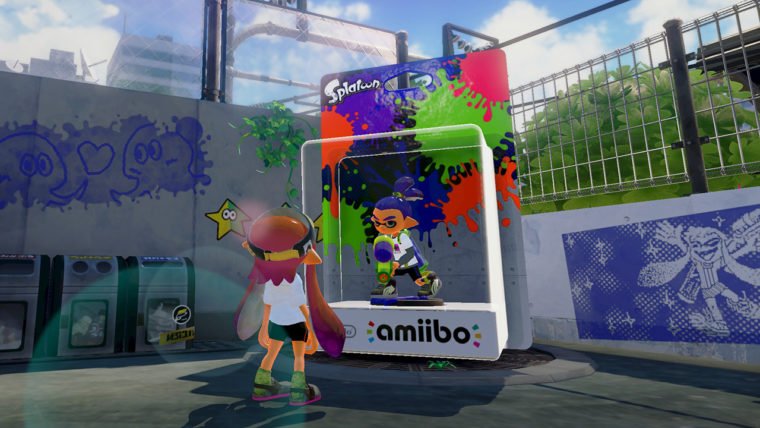 On the amiibo front, Splatoon features one of the best implementations of Nintendo’s figures so far. By tapping one of the three amiibo to the gamepad players will unlock challenge modes within the single player missions. There are no new areas here, keeping this from feeling like content that was cut from the game. Instead it simply takes the single player missions and changes them around, such as forcing you to use a roller, instead of a gun. By beating these you’ll unlock gear for your character. While they look great, they don’t seem to offer any major boosts over the main game’s options, so those without amiibo shouldn’t feel left out.

Splatoon had a lot of expectations to live up to after its fantastic initial unveiling at E3 2014. It faltered in just a few places, such as the lack of voice chat, but overall it is another great new IP from Nintendo. The gameplay offers a fun new take on the genre, and presents a unique and enjoyable world. The visuals are stellar, and the soundtrack is very entertaining. The biggest star though is just the overall style of the game, with characters that will quickly endear themselves to every player. Splatoon is easily one of the most unique games of this generation, and one of the best as well.