Before getting into the nitty-gritty of platforming, controls, combat, and all that, I have to preface this review by saying that I played and loved the original Battle for Bikini Bottom when it launched all those years ago. Normally, that wouldn’t factor in that much if this were a remake of a best-selling all-time classic that is practically universally adored, but Battle for Bikini Bottom hasn’t received a huge amount of recognition post-release. A sizable crowd fell in love with its gameplay, atmosphere, and environments, but the majority of people either ignored it or quickly forgot about it. Your enjoyment of this game is going to vary wildly based on your relationship with the original, and this is both Rehydrated’s greatest strength and its most damaging weakness. 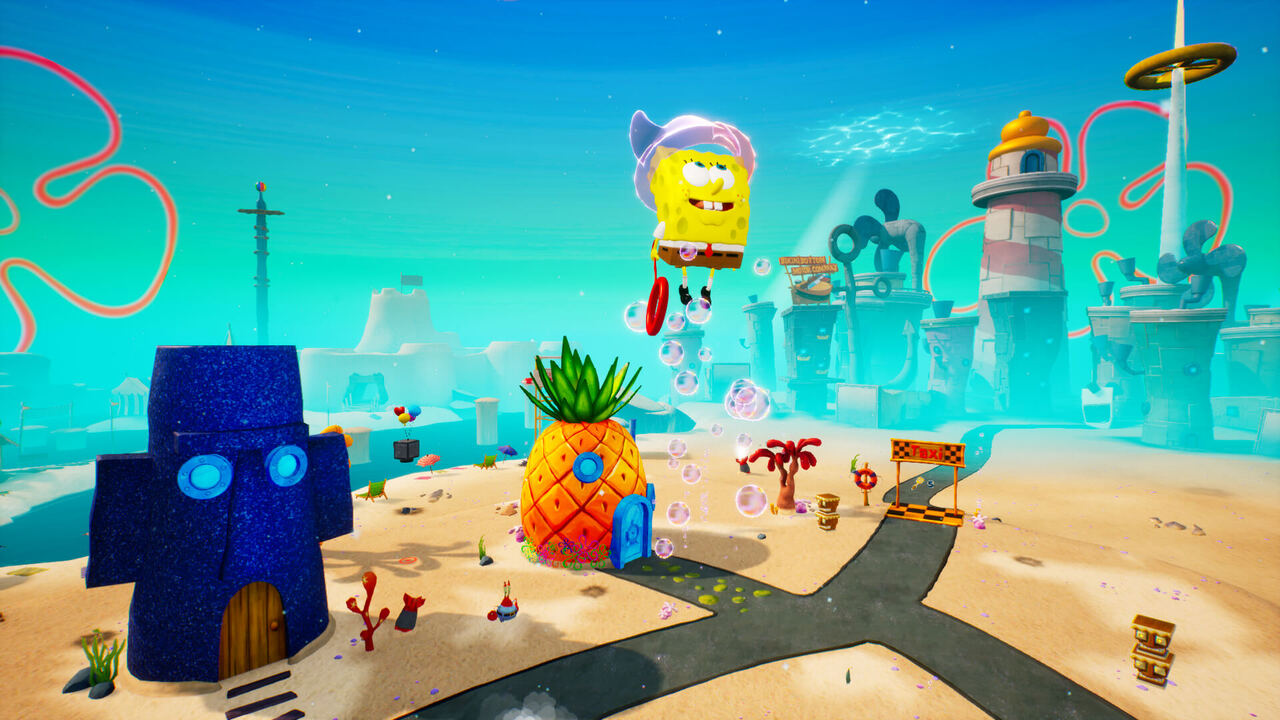 The most immediate difference between Rehydrated and the original release is the substantial visual overhaul. Bikini Bottom has never looked so good, and the hyper-saturated colors do an excellent job of bringing classic locations from the show to life. The game is absolutely stunning, but the new facelift does very little to hide the blemishes that mar the game overall. Don’t let the improved graphics fool you, Battle for Bikini Bottom Rehydrated definitely still feels like a 3D platformer from 2003. The archaic level design and odd design decisions sharply contrast with the new modern look, leaving Rehydrated with an identity crisis between old and new. It looks like something that could’ve come out today, but sitting down and playing it provides a point of reference for just how far games have come over the last 17 years.

Movement and platforming still feel as great as ever, but it’s the levels you’re expected to jump around in and explore that are the problem. As varied and beautiful as Rehyrdated’s locales are, each contains segments that take you out of the experience and remind you that you’re playing a 17-year-old game. There were so many moments where I received an unwanted reminder of what some video games used to be like in the early 2000s (a certain ball section in the Mermalair comes to mind). Moments like these made me appreciate modern platformers like Super Mario Odyssey or A Hat in Time so much more, and they also reminded me why Battle for Bikini Bottom ultimately failed to receive widespread appreciation outside of its cult following. This game has a bevy of strange design decisions, frustrating level design and checkpoints, and sections that are straight-up annoying. 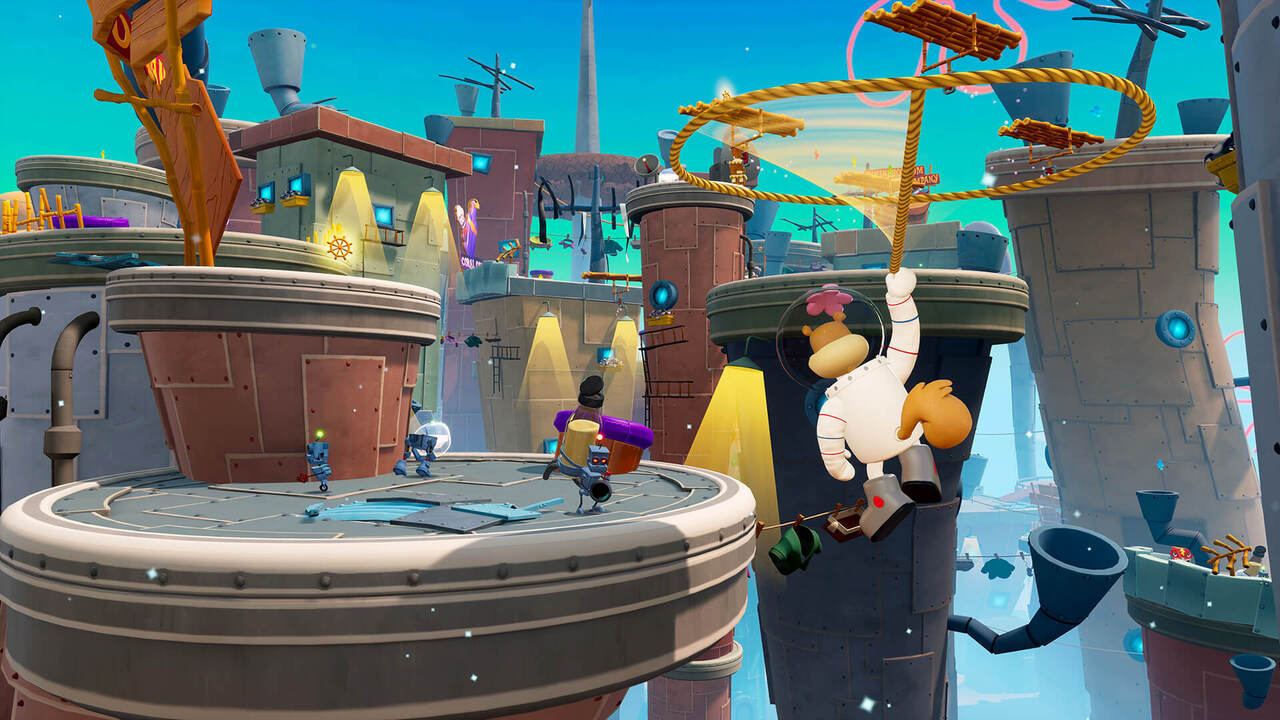 Battle for Bikini Bottom excels in areas outside of gameplay, however, and that’s arguably the main reason it’s beloved by so many. The game absolutely nails the atmosphere of the show. The writing is just as sharp and witty as the early seasons of the cartoon, and the voice acting is superb with most of the original actors reprising their roles for the game. Unfortunately, Clancy Brown didn’t voice Mr. Krabs in the original, and he hasn’t returned for the role in Rehydrated either, but performances are solid all around, even those that had to fill in for others. Battle for Bikini Bottom’s jokes wouldn’t feel out of place in the show, and that’s a badge of honor it should wear proudly considering the sheer amount of memorable quotes from the first few seasons of the show that are still circulated online today.

Still, writing and dialogue are not the central focus of a platformer, so moments spent with the show’s colorful cast of characters are fleeting, separated by extended gameplay segments where you run, jump, and fight through fairly uninteresting levels. Having three playable characters helps to break up some of the monotony of spatula collecting and sock hunting, but not every character is created equal. While you start the adventure as SpongeBob, you soon unlock the ability to swap to Patrick or Sandy. Each character has their own unique set of abilities that allow them to solve certain puzzles and obtain some of the game’s many collectibles, but there’s a clear divide between the three. Sandy is without a doubt the best of the trio, having better aerial control with the aid of her lasso, and SpongeBob is slightly worse but still capable. Patrick, however, is unfortunately much worse than the rest of the playable cast. His main schtick is that he can pick up heavy objects and throw them, which is easily the least interesting ability in the game. It doesn’t help that the throwing puzzles aren’t usually that engaging, either. 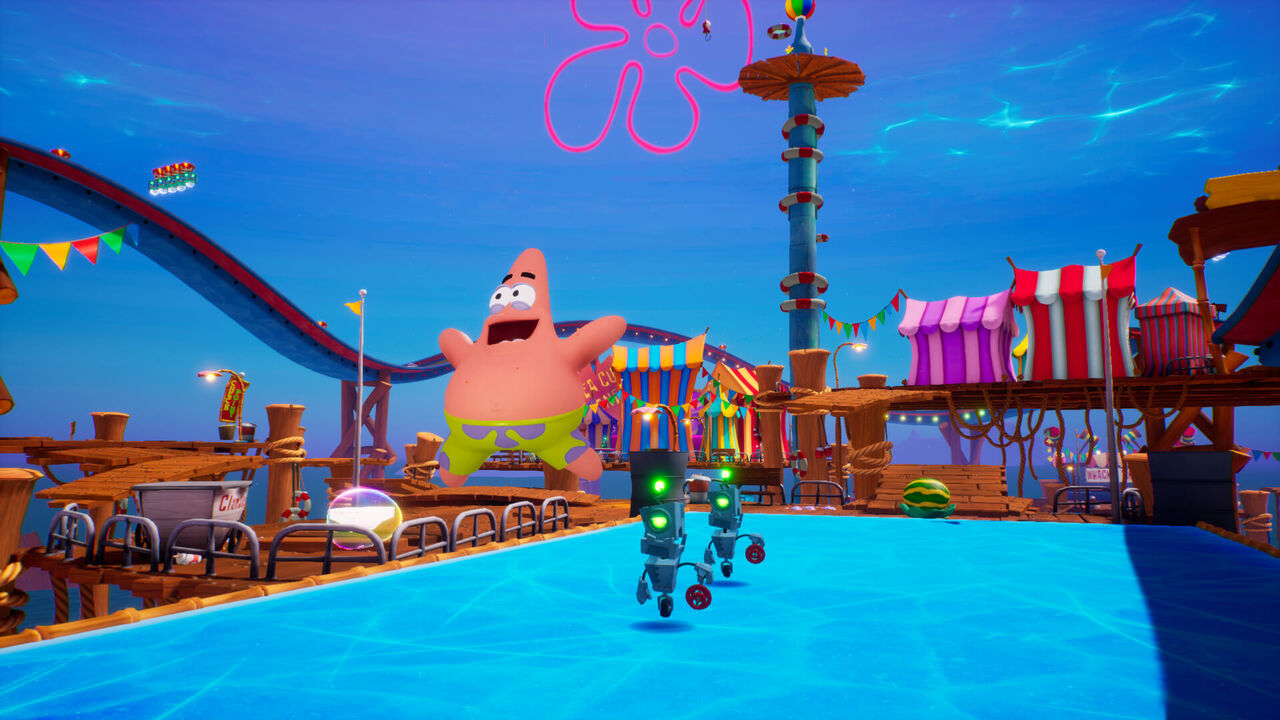 On top of the base game, Rehydrated also adds an all-new multiplayer mode for up to two players, and it’s terrible. It’s painfully boring, and my co-op partner and I struggled to get through more than 5 minutes of it (although we pushed through for the sake of this review). It’s a horde mode, but there’s practically no punishment for failure. Death simply means restarting at the start of the round you’re currently on. More characters are playable in this mode than the base game, including the likes of Gary and Mr. Krabs, but each of them have simplistic movesets that are pretty much identical to one another. Battle for Bikini Bottom’s combat is serviceable at best, so I cannot understand why they chose to include a mode centered entirely around fighting. The environments are bland and uninteresting, there’s no depth to the combat, and there are absolutely no stakes. It’s one of the worst horde modes I’ve ever seen, but thankfully, it’s entirely optional. Young kids will probably like it, though, just to smack around robots as SpongeBob and friends.

Despite all of its issues, though, I still found myself enjoying Battle for Bikini Bottom Rehydrated. The game has glaring issues and definitely does not hold up when compared to modern platformers, but I still had fun for some reason. As I stated above, I love the original, and that’s probably why I enjoyed Rehydrated as much as I did. Nostalgia is the biggest selling point for this game, to the point where a review is practically pointless. Those who buy Rehydrated likely already knew they were going to buy it the moment they saw the reveal trailer, and those on the fence about the game will have more than likely stopped reading by this point after seeing all of the complaints and negative impressions of the game above. This is one of those games where the people who would want it already know they want it, and those who have no history with the game will find no compelling reasons to give it a shot. Rehydrated is made with one specific audience in mind: people who like SpongeBob SquarePants: Battle for Bikini Bottom. 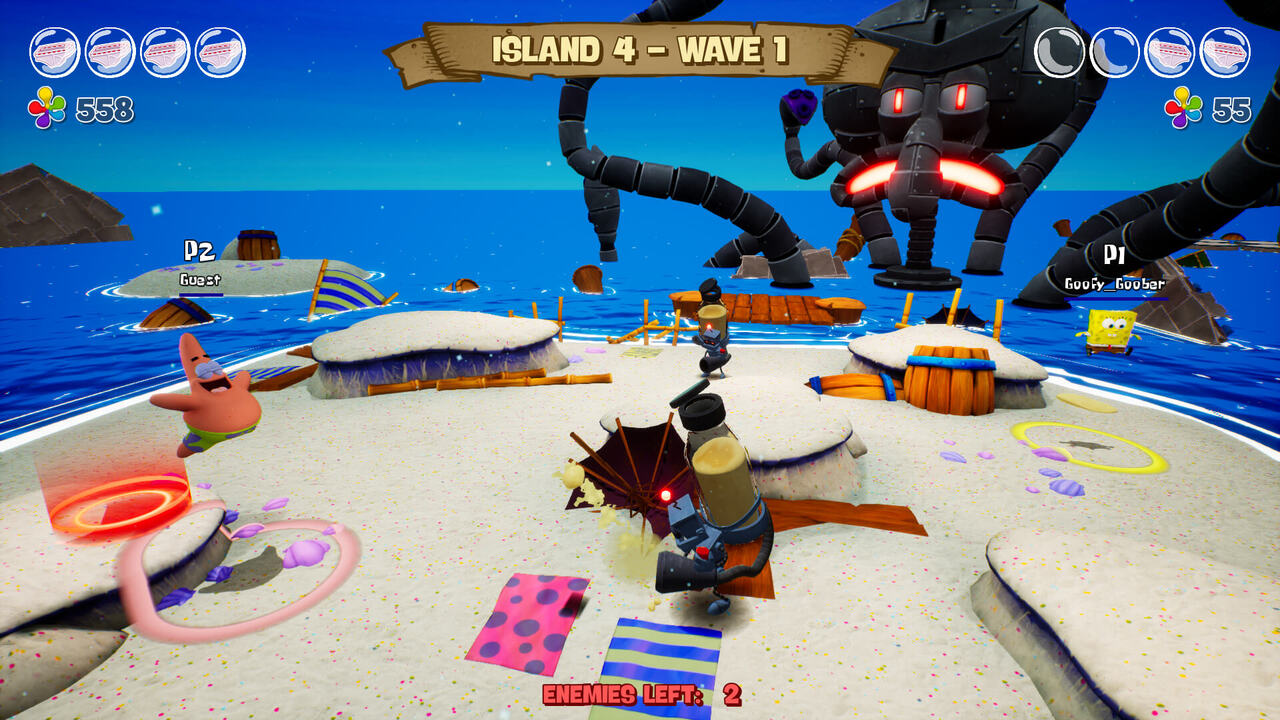 That doesn’t mean Rehydrated is a total failure, though. It’s in a very strange position. The Battle for Bikini Bottom fanbase is fairly large. The game even has a very dedicated speedrunning community that continues to push the game and its mechanics to their limit even 17 years after launch. People with fond memories of collecting golden spatulas throughout Bikini Bottom and other fan-favorite locations from the show will adore Rehydrated, and that’s exactly the sort of audience the game sets out to please. Unfortunately, its dedication to recreating the original as faithfully as possible will alienate anyone who has never played it before.  There have been so many other great 3D platformers since 2003 that this one feels dated right out of the gate, but that’s what Battle for Bikini Bottom fans are looking for. Rehydrated chooses to maintain all of the original’s flaws, resulting in a very faithful remake that will surely elicit nostalgic memories if you’ve spent a lot of time with the original Battle for Bikini Bottom, but it will do absolutely nothing for everyone else. This is a run-of-the-mill collectathon that a large group of people just so happen to have fond memories of.