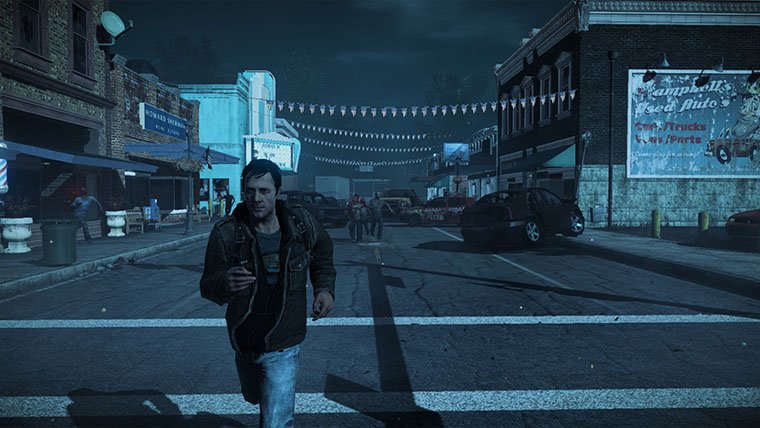 There has been no shortage of developers and publishers jumping at the opportunity to bring old games to the new Xbox One and PlayStation 4 consoles.  For the most part these have been pretty good.  We’ve seen remastered versions of The Last of Us, Tomb Raider, Borderlands, and many other games in the past couple of years which offered a pretty compelling reason to double-dip.  Upgraded visuals and technical upgrades to take advantage of the more powerful hardware usually coupled with all the available downloadable content have been the usual selling points.  While State of Decay: Year One Survival Edition from Undead Labs and Microsoft Studios boasts these features as well, it only delivers on part of it.

It’s been almost two years since the game first debuted on Xbox 360, but State of Decay: Year One Survival Edition on Xbox One is kind of a technical mess.  The type of mess that you wouldn’t associate with something that claims to have been “Remastered.” While the game has seen a bump in resolution and has received some upgrades in terms of lighting and effects, this IS NOT a significant improvement over what we saw on the Xbox 360.   State of Decay on Xbox One suffers from horrible frame rate issues and choppy animations, that make it almost unbearable to play.  The game struggles to keep the action flowing when things get hectic as more characters are on screen at once.  State of Decay fans accepted these shortcomings of the original game, but it’s clear that the Xbox 360 hardware wasn’t the thing that was holding this game back.  Almost everything that Undead Labs does well in terms of gameplay, which is admittedly a lot, is overshadowed by what is a technically awful experience in this re-release.

For this remaster to have so many issues in terms of the visuals and performance of the game is a huge disappointment.   State of Decay is one of the most impressive takes on a zombie survival game that we’ve ever seen.  Undead Labs has some great ideas about how to make the consummate open world zombies game, even if they don’t execute in all areas.

The setting is familiar for a game dealing in this subject matter.  You begin the game as a survivor who is trying to piece together what is happening and why.  State of Decay is an open world game, one where you’ll meet numerous survivors, and be given the ability to control a number of them as you party up and hunker down to defend yourself against the zombie hordes.  The most interesting bits of State of Decay are in its management aspects.  You, the player, simply aren’t managing a single character, but a community of characters that can die permanently if not managed well.  You’re looking to build influence, boost morale of your community, increase the population, and scavenge resources.  Missions and their delivery are familiar for open-world games, but the very chance that your character has in not returning from said mission (permadeath) throws an interesting twist into the gameplay. 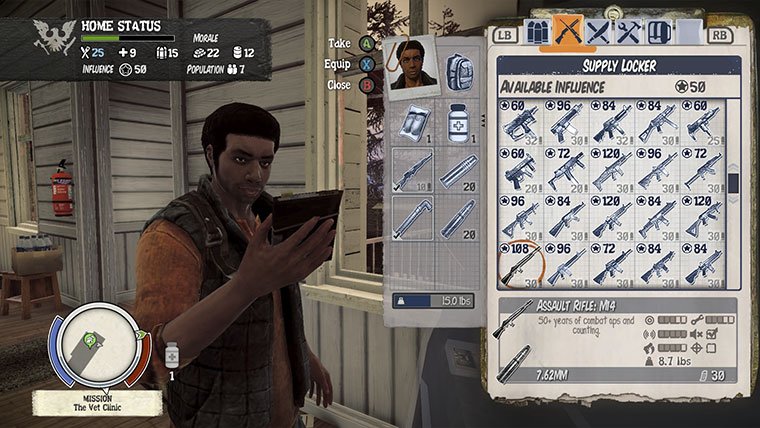 The ideas behind State of Decay are better than the execution.  While the missions and meta game are intriguing, what you do on said missions is a little underwhelming.  That’s largely in-part due to control issues in traveling (by vehicle) to mission checkpoints, and the combat system which suffers from the aforementioned frame rate issues and sluggishness.  Combat is a big part of this game.  Whether you’re out wandering in the open world or are on a specific mission where you are defending or saving others, you’ll be fighting zombies.  Using both melee attacks and guns, it’s incredibly hard to know what it is you are trying to hit.  There’s no lock-on mechanic for the melee action, so most fights usually play out in you wildly mashing the attack button while looking for a visual queue that the enemy is ready to be finished off with a final blow.  But it’s still interesting nonetheless.  Players must manage their stamina and weapon durability.  Deplete your energy and you’ll be overcome by the horde as your character will become visually exhausted and unable to swing as quickly with melee weapons or have the ability to run away.   Guns are a little more forgiving as there’s a targeting reticule, but the sporadic animations, inconsistent frame rate, and general sluggishness of the game during intense action really hinder all facets of the combat.

State of Decay mixes third person action and RPG elements extremely well.  The ability to switch between characters on a whim, build relationships and gain respect from others, scavenge items for survival, make tough choices, and the general mixture of all these different management components really make this a standout among the many other games dealing in the same subject matter.  Those who can look past these major technical issues will find a pretty compelling game with a good amount of additional content over the original release.  State of Decay is one of the deepest zombie survival games around, one that isn’t short on ideas or ambition.  Year One introduces new features like additional weapons, characters, vehicle types, mission types, and other small improvements.  This re-release also includes both expansions for the game, which includes Lifeline and Breakdown.  Interestingly, these two expansions for the game both differ from the original single player campaign.  Breakdown offers a seemingly endless mode where there is no storyline.  The player goal being only to survive for as long as possible.  Lifeline, on the other hand, does tell a story, albeit a much different one that focuses on a group of soldiers.  These inclusions up the offering of Year One Survival Edition to three distinct ways to play and a bunch of gameplay wrapped in the $29.99 package.

State of Decay’s visual presentation is the most dated that we’ve seen on the Xbox One.  Calling this a remaster seems a little disingenuous, as there are so many glaring issues that constantly take away from the experience and overshadow the interesting gameplay ideas.  State of Decay: Year One Edition can be a lot of fun for those that can forgive its shortcomings, but those shortcomings are many.

state of decay Xbox One
"meh"