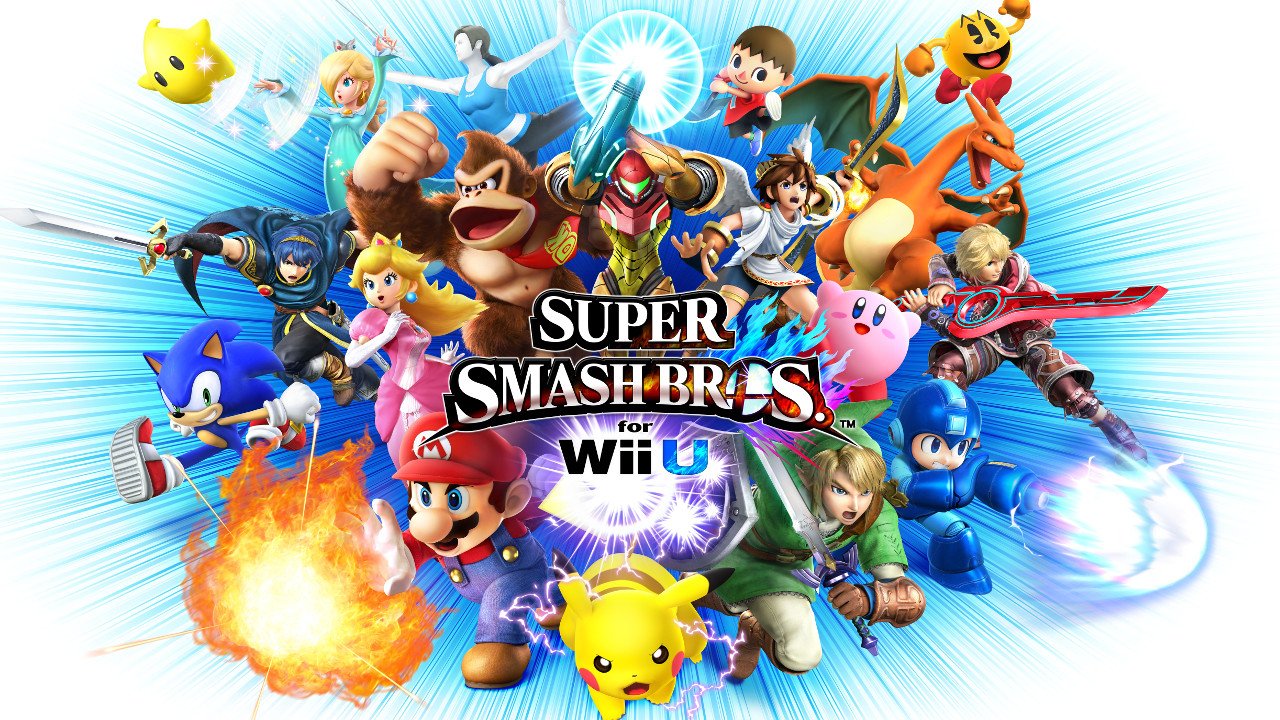 Super Smash Bros. for Nintendo 3DS was certainly a fantastic game, but as we said in our review it was the lead up to what many hoped would be a better offering on its HD brother, the Wii U. Now, after a few months of extra wait, Super Smash Bros. for Wii U is finally here. But of course, with any major title like this the question remains, does the game live up to the immense hype surrounding it? The answer was yes for the handheld version, and it is yes once again here. However, it goes much further than that, with Super Smash Bros. for Wii U going above and beyond in many key areas, which make up for the much smaller issues that still remain.

All of the same classic gameplay and modes are present and accounted for in Super Smash Bros. for Wii U. You can dive right in and start beating up your friends and/or computer-controlled opponents in Smash Mode, or you can check out the more intricate modes. All-Star Mode is just as fun as ever, as you take on characters in chronological order while deciding when to use your limited healing supplies. However, the redesigned Classic Mode, which pits you against a series of randomized battles with Master Hand waiting for you at the end, isn’t quite as enjoyable as it has been in the past. It is only a small gripe, but the variety of the battles laid out for the player was woefully lacking, resulting in Classic Mode feeling less like an experience and more like a chore. Home Run Contest also returns, along with a retooled Target Blast that features three separate stages to try to blow up. These are all fun and interesting distractions from the core gameplay, and the multiple Challenges based around them will keep you coming back for some time. On top of all of this are the Wii U exclusive modes, which add a lot more to the game than anyone might have expected, even if there are one or two disappointments mixed in. 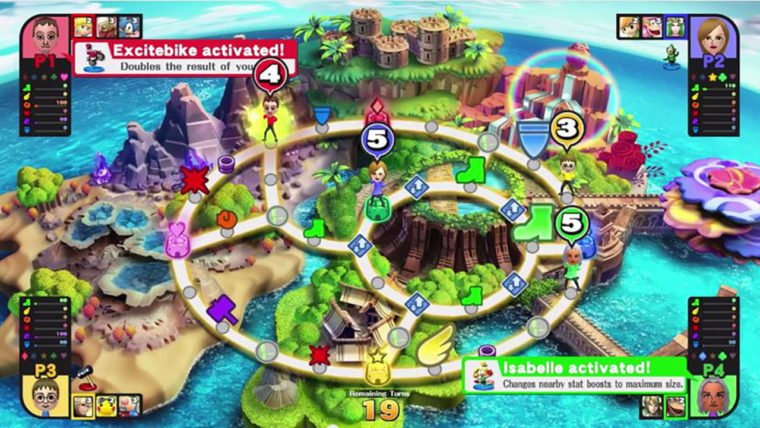 First up is the Smash Tour Mode, which replaces Smash Run from the 3DS. This is a quasi-Mario Party mode where players move around on a board collecting power-ups, weapons, and extra fighters. If two contestants collide on the board then all four players fight it out, with prizes being awarded to the winner. At the end of the game there is another brawl, with all four players pulling out each of their collected fighters. It all sounds great and could have easily been a new way to play Smash, but like Smash Run before it, Smash Tour ends up feeling like a tacked-on piece of the game. Moving around the board is so random that there is little strategy to the game, and rewards are so difficult to earn that it felt more productive for players to simply avoid each other until the very end. If you have a few friends over and feel like you need some more form to your Super Smash Bros. then you might get some enjoyment out of Smash Tour, but overall it will probably be skipped in favor of the many better modes.

The disappointment of Smash Tour is easily overlooked thanks to the quality and abundance of the multitude of other modes included. Event Match makes its triumphant return with tons of challenges to take on either by yourself or with a friend. Each match has its own goal and can mix up the basic structure of the game in various ways. By forcing you to play as different characters with interesting and varied win conditions Event Match gives Smash Bros. an extra piece that further lifts it above its handheld counterpart. Another big addition is the new Master and Crazy Orders which add in even more variety for players to enjoy. They both boil down to different ways of pummeling other characters, but somehow they work to incentivize the player to keep coming back. Struggling to complete extra turns in Crazy Orders while risking most of your reward for the chance at more items/gold adds diversity to the otherwise repetitive experience that is Super Smash Bros. for Wii U. Any time you find yourself feeling like the single player game has worn out its welcome some new element will present itself that gets you right back into the action. 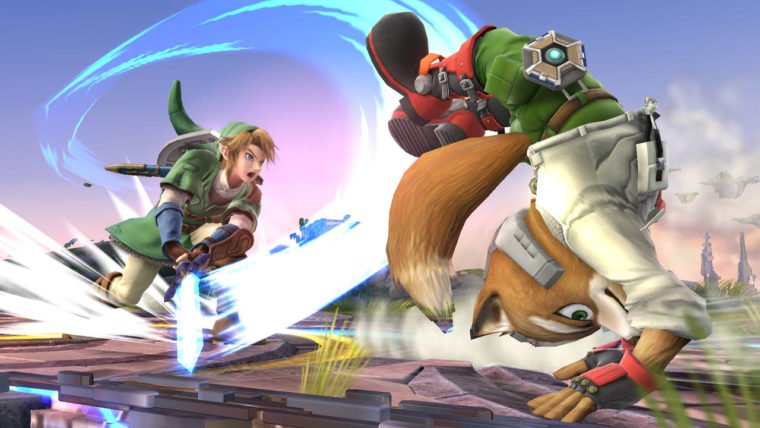 And yet this still hasn’t covered everything contained in Super Smash Bros. for Wii U. There is still 8-Player Smash, which is just as frenetic and insane as you might imagine. Multi-Man Smash, which sets forth plenty of challenges for the player to tackle as they see fit. And the Stage Builder, which is much more refined and useful this time around thanks to the Gamepad’s touchscreen. Most importantly though, Super Smash Bros. for Wii U features a fully functional online multiplayer. In a year full of botched AAA launches, including some whose online woes were so terrible that the single player elements were impacted, Nintendo has launched a hugely popular game and had its online infrastructure withstand the test. The occasional match might be laggy and you can receive an error or two in your search, but overall the system is sound and you’ll be able to fight an endless wave of online opponents either one-on-one or in more action-packed four player matches.

But none of this would matter if the core gameplay weren’t so well refined.

But none of this would matter if the core gameplay weren’t so well refined. No matter what extra features and content are thrown in, a Smash Bros. game will live and die by how well the combat plays. This was the fatal flaw with Super Smash Bros. Brawl, which was fun, but strove to bring in casual players a bit too fervently and ended up with a game that felt lacking in the competitive arena. As we saw with Super Smash Bros. for Nintendo 3DS, Nintendo and Bandai Namco have focused more on bridging the casual/hardcore divide and done so with great success. Matches always feel fast and amusing, while retaining the edge of competitiveness that is required for the longevity of a fighting game. Each match feels like it can be won through sheer skill, but you can always tip the scales a bit if you want to by including items and stage hazards. 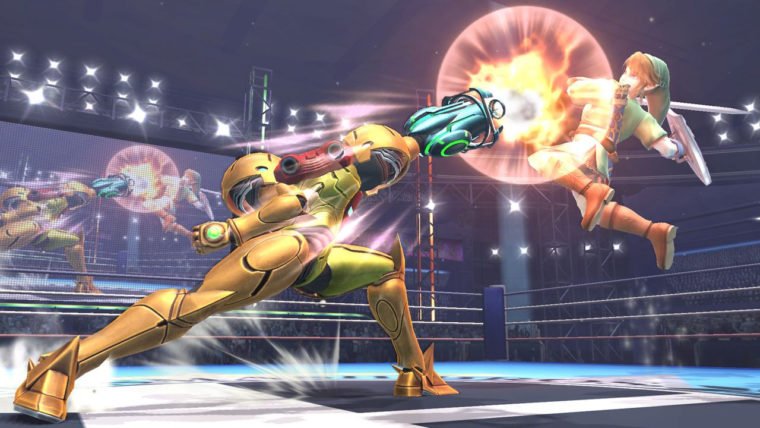 This balance is an even bigger achievement considering that in those matches you’ll be able to choose from, and fight against, the largest selection of characters the series has ever seen. While it might be the same options that were available on 3DS, seeing them all on the big screen in 1080p and running at a smooth 60 frames-per-second is truly marvelous. Tracking the action on the 3DS’s smaller screen could become troubling at times, but here it is all presented perfectly and requires little effort. This is further helped with the much more varied levels on offer in Super Smash Bros. for Wii U. While the stages might be similar in quantity, the extra power and screen size has allowed this entry’s efforts to truly come alive. Larger, more intricate arenas for battle are mixed in with the tried-and-true classics, resulting in a fantastic mixture that should please every fan. And, if you prefer your Smash games a little more on the competitive side, simply choose the Omega version to get a Battlefield-esque variant of every single stage available.

Much like the 3DS game from earlier this year, Super Smash Bros. for Wii U has shown itself to not only live up to the hype but exceed it with relative ease. This is based both on the core gameplay, which is about as solid as it has ever been, and the ridiculous amount of content that was included. You could spend dozens of hours making sure you collect every trophy featured in the game only to turn around and do the same to unlock every Challenge, or Event Match. With a stable online element, and plenty of Smash Mode options available, that longevity extends into the multiplayer as well. Super Smash Bros. for Wii U was the main course we were all waiting for, and no one will leave this meal unsatisfied.

Super Smash Bros. for Wii U

Super Smash Bros. for Wii U
You May Like