The latest news in the world of video games at Attack of the Fanboy
October 31st, 2015 by Kyle Hanson 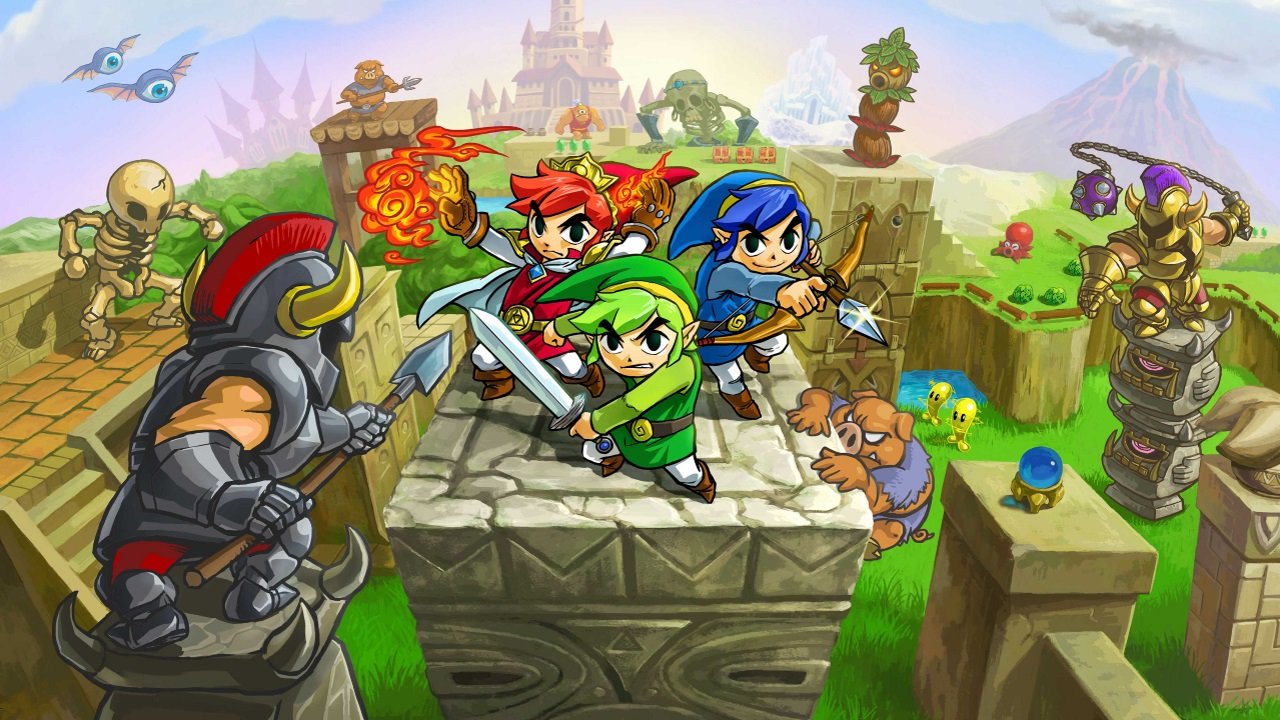 The Legend of Zelda series had always been a solo affair, until Capcom and Nintendo took it in a wholly different direction with the Four Swords spinoff series. Starting as an added section to the GBA remake of A Link to the Past, Four Swords was actually a fun little adventure, giving players the ability to team up and make their way through classically styled Zelda dungeons. It eventually became its own game on Gamecube, which was fantastic, but extremely difficult to get together and play. Now the idea has resurfaced with The Legend of Zelda: Tri Force Heroes, taking the concept of co-op Zelda to a new level, while trimming the player count to just three. Modern features like Download Play and online multiplayer make getting a game working much easier. And while excellent Zelda style design pushes Tri Force Heroes firmly into the enjoyable range, multiple mistakes make it easily skippable for all but the most hardcore of fans.

The Legend of Zelda: Tri Force Heroes tells the story of Hytopia. A kingdom near Hyrule that has been struck by a horrible curse of…bad fashion? Taking a much more lighthearted tone than the usual doom and gloom of Zelda proper, Tri Force Heroes’ story is utterly forgettable. Longtime fans who don’t get fully into the humor of it will find it somewhat insulting that this is even a part of the series that they have come to love. If you can take it less seriously, it is still a little annoying in its presentation, feeling totally out of place and not really hitting the right comedic notes. 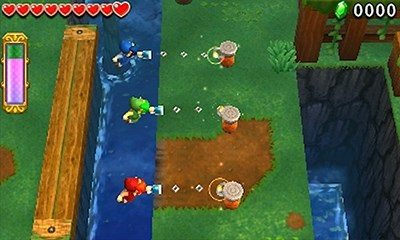 In the end, the story is just a means to the end of getting players into the game. As one of the three Tri Force Heroes, your Link will travel to the Drablands, which look a whole lot like the many sections of Hyrule. There’s a forest, a volcano, and a wintery mountain, all as usual. The enemies you fight are also classics from the series, which is good for fans, while not necessarily fitting with the plot structure.

The game plays much like its Four Swords predecessors, adopting the visual and gameplay designs of The Legend of Zelda: A Link Between Worlds.. Three individual players take on any of the game’s 32 missions, once you’ve unlocked them of course. The iconic sword remains, but the shield is gone this time around. As far as other items, players can only wield one per mission. These are setup specifically for the design of the dungeon you are in, so sometimes all three players will have the same, while others they’ll have totally different items.

This is the main crux of Tri Force Heroes’ puzzle design. Players have to work together to make their way across the landscape, battling enemies, flipping switches, and otherwise solving whatever the game throws at them. The totem mechanic adds some flair to this, allowing all players to pick each other up, giving the game some semblance of 3D gameplay. Bosses also utilize all of these elements, presenting puzzles of their own, which can be really fun to solve. To make all of this work in-game, players must figure out where to go, what to do, and with what item. If one is in the same room as the other players this task is rather simple, just talk or yell at each other as the situation calls for it. However, once you go online it becomes a whole different story.

Communication is key in a game that requires multiple people to work together to solve complex problems. However, there is no voice, or even text chat within The Legend of Zelda: Tri Force Heroes. Instead players communicate via eight emotes at the bottom of the screen. Tapping these, sometimes multiple times in a row, does a surprisingly decent job of communicating what you want the other player to understand. However, it is no substitute for being able to just say “hey, go over there and do this.” 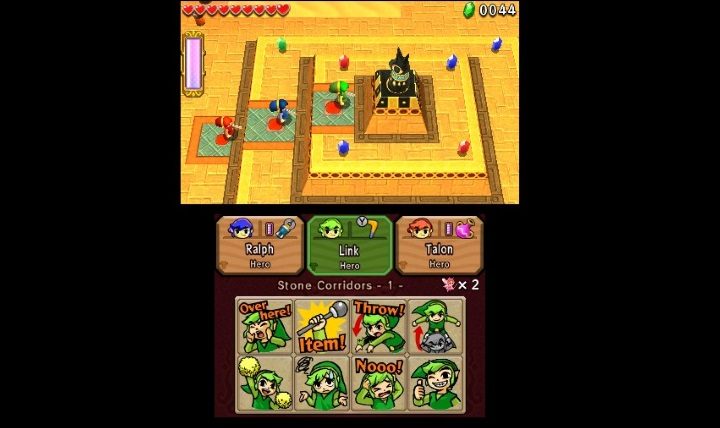 The main problem is that there is no way to direct players attention anywhere except where you are standing. If you are standing somewhere and want the other player to go somewhere else, or hit something across the way, then you pretty much have to spam emotes until they figure out what you’re trying to convey. Most of the time these can only be used for hints, which might be nice as it prevents experienced players from spoiling the surprise for newcomers by explaining exactly what to do in every level. However, it can get frustrating as players wait for each other to figure out what they’re supposed to be doing.

You can always remove this hurdle and play by yourself, but then you have to contend with a massive wall instead. The dungeons might shift a little to accommodate one player instead of three, but they were definitely designed for the larger group. Instead of just playing as a single Link, you must take control of all three characters, one at a time. This is just disastrously slow and tedious, as you have to switch around between all three characters multiple times per stage. Most will decide fairly quickly that the single player experience is not for them, and move back to online.

However, online multiplayer presents its own challenges. If a single player quits out of the game it will kick all players back to the lobby, losing tons of progress. Making things worse, if a player doesn’t quit, but instead just stops playing, as happened a few times for me, the other two are left to literally carry him through the level, or quite out. There is a Blacklist feature, so you can make sure you don’t get matched back up with a troublemaker, but to do this you first have to suffer through a game with them. 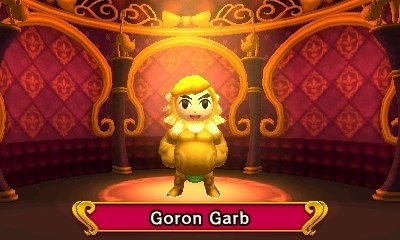 There’s still more to The Legend of Zelda: Tri Force Heroes, such as the loot system. By finishing levels players will be offered the choice of one of three chests. Contained within are random items that can be used to purchase new costumes for your hero. These costumes are not just cosmetic, with some giving you huge power ups, such as being able to swim through lava. Collecting items can be tedious though, so thankfully Nintendo added a shop where you can buy and sell these items, making sure you don’t have to rely on the mercy of the random number generator.

However, if you don’t get into the costume mechanic, there is little to compel players to go back and revisit these missions. Special challenges unlock later on, offering some additional motivation, but even with these, many players will become tired of going through the same levels over and over again.

The Legend of Zelda: Tri Force Heroes is an enjoyable multiplayer Zelda experience, but one that has trouble holding up too well over the long haul. Single player is a bit of a disaster, offering little more than tedium and frustration, so if you don’t have some friends to play with you might want to avoid this game. Even without them though you can hop online, which works extremely well when all three players are invested. Overall, if you enjoyed Four Swords then you’ll find something to like here, but casual fans might struggle.