TMNT: Out of the Shadows Review 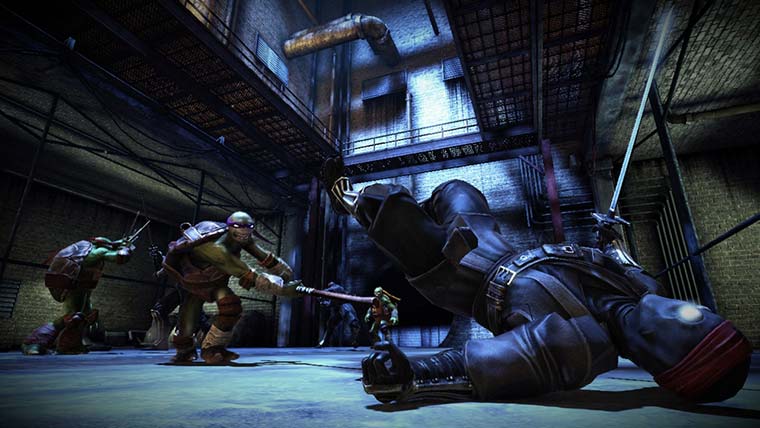 Teenage Mutant Ninja Turtles was always one of my favorite franchises growing up. I had all the action figures, watched the cartoon/movies and even loved playing The Hyperstone Heist — the weird Turtles in Time re-skin game for the Sega Genesis. I just couldn’t get enough Ninja Turtles. So after watching trailers for Out of the Shadows, what seemed like a dark, gritty telling of the Ninja Turtles story, I was instantly intrigued. But did Activision and developer Red Fly Studio deliver?

Although the splash screen for Nickelodeon appears every time the game is booted, Out of the Shadows has nothing to do with the show currently running on the children’s network. Instead, the game has an art style all of its own — and it’s a bit unsettling. It seems like Out of the Shadows can’t tell if it wants to portray a more realistic take on the Turtle brothers, or stick with their more cartoony roots. Instead, we get a weird hodgepodge of character models which, at times, can look slightly disturbing and nothing like the Ninja Turtles of old or new.

Out of the Shadows is an action-adventure, beat-‘em-up style game set in a 3D enviroment. Players take over as one of the Turtle brothers as they jump, climb, kick and special attack their way through various sets and areas — all of which are very bland and generic. The other three Ninja Turtles also fight alongside of you, allowing you to switch through the various turtles to pull off juggling attacks and combo moves. While this all seems fine in theory, the execution proved more difficult than explained and I just ended up playing as my favorite turtle throughout the majority of the game — which is Raphael, if you’re wondering.

Along with the background and levels seeming boring and repetitive, how the Turtles interact with each other as you move throughout the game is even more tiresome. The same few catchphrases are said during battles and they keep repeating the same lines to each other as you move to the next area. I swear if I hear the story about how the tortoise and hare matchup seems unfair or Michelangelo’s theory about how there may be an unknown, fifth turtle out there one more time, my controller is going through the TV.

Speaking of the game’s dialogue, the voice acting in this game couldn’t be more atrocious. The game’s story is told through cartoon still frames while the characters narrate over them. I don’t know if the voice actors didn’t get paid enough, or if they just didn’t care, but all their lines are delivered in the most robotic, mundane ways where I have to believe they weren’t even in the studio at the same time — just instructed to read lines to the wall. And that’s about all they did. While the cartoon stills are actually quite well done, it’s jarring going from that art style back to the grisly character models that players experience for a majority of the game.

The gameplay itself isn’t much different than the level of voice work.

There are so many technical issues, bugs and glitches in this game, it made the whole thing nearly unplayable. So many times your character would just clip through other objects, get stuck mid-air in a jump unable to come down or, my absolute favorite, get caught in an endless loop of running up and wall and backflipping off — even with enemies trying to filet you. The level design gives barely any indication of where to go and is filled with invisible walls making for a confusing and frustrating experience. The game even completely crashed on me at one point, making me play an entire area again from the beginning. 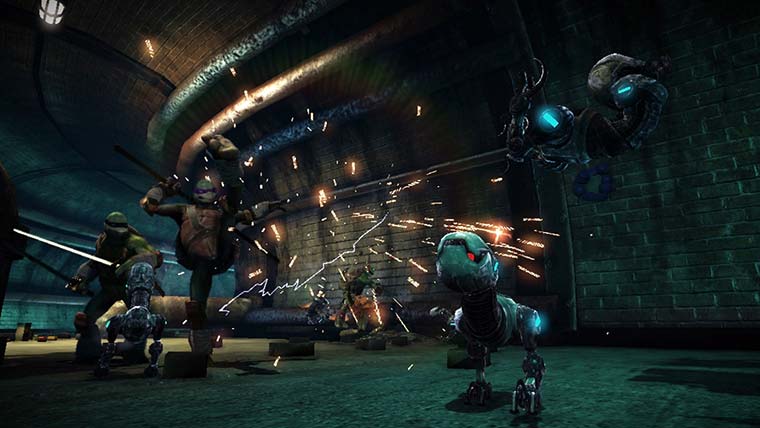 And we haven’t even gotten to the combat yet.

Players have two ways to engage an enemy: the typical choice for a beat-‘em-up game (to beat people up) and a stealth option. The fighting sequences involve two buttons for attack — weapon or kick — as well as a counter button similar to the system in the Batman: Arkham franchise. The fighting animations are repetitive and dull and enemies seem to take far too many hits before going down — even in early stages of the game. The biggest problem is none of the combat seems synonymous to the Ninja Turtles franchise. Sure, each Turtle has their signature weapon, but other than that it seems like any other generic beat-‘em-up. The only redeeming factor is some of the later combos you can unlock are pretty awesome the first time you execute them.

On top of the disappointing action sequences, the stealth bits are worse. By clicking in the left stick, the Turtles crouch down into stealth mode. The lead turtle can halt his brothers from following him and sneak up behind enemies for a one-hit KO. While this would seem like a better alternative to the monotonous fighting sequences, stealth mode would often end prematurely, due to the AI’s ridiculous cone-of-view, triggering another fight.

Throughout the levels, there are various items to pick up — pizza, energy drinks, various types of shurikens, etc. — however, only the turtle who picks up the item is allowed to use it, so no sharing. This differs from the level-up system. Anytime a turtle levels up, it earns Ability Points to be used in the upgrade tree. These ability points must be shared between the four turtles. These differing systems can be frustrating when switching between turtles — not remembering who has what item or power-up. It should be a uniform system — all items and Ability Points can be shared or not at all.

Also, it’s absolutely ridiculous that at no point in time does any Turtle shout “COWABUNGA!” while eating a pizza to regain health, but I digress.

The only thing keeping this game from being a complete and utter atrocity is actually outside of the main story mode. Back at Turtles HQ, players can select a mini-game called “Donnie’s Arcade.” Here, up to four players can play together in a side-scrolling beat-‘em-up similar to the classic TMNT Arcade game. The character models are still the same disturbing Turtles from the main campaign, but the gameplay reminded me of a better time where I wasn’t playing the monstrosity that is Out of the Shadows. But then it was abruptly cut short because only one level of Donnie’ Arcade is unlocked at first — the rest must be unlocked by playing the campaign.

As a big TMNT fan, I couldn’t have been more disappointed by the outcome of Out of the Shadows. It’s boring story mixed with generic gameplay, numerous bugs and glitches as well as repetitive voice overs and music made me wish I wasn’t playing this game the entire time I was playing. Honestly, I’m not sure why this game even exists considering Activision has plans on releasing a retail TMNT game based off the current running Nickelodeon show later this year. Shadows just couldn’t decide what it wanted to be, so instead of another quality Ninja Turtles classic, we get this forgettable excuse for a Summer of Arcade release.

Do yourself a favor, if you too are a Ninja Turtles fan and are thinking of buying this game: don’t. Instead, find an old copy of Turtles in Time or Hyperstone Heist — better yet, find a place that still has the old TMNT Arcade cabinet. It might be more of a hassle, but trust me, it’d be better than even looking at Out of the Shadows.

TMNT: Out of the Shadows

Home / Game Reviews / TMNT: Out of the Shadows Review