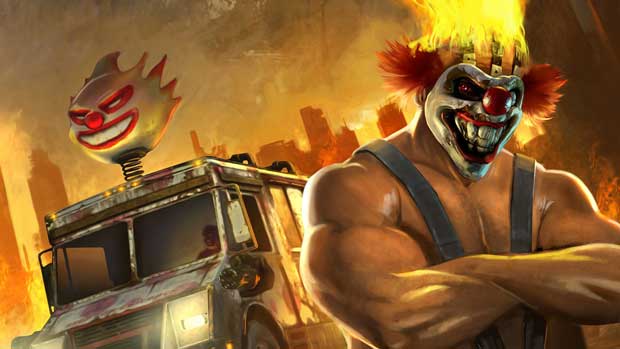 Twisted Metal is the longest running franchise for Sony’s PlayStation brand.  It’s a franchise that introduced competitive console gaming outside of the realm of sports titles and fighters back in a time when online play was a pipe dream on consoles.  That being said, gamers got their kicks from forming split screen rivalries, passing the controller back and forth between buddies to get their multiplayer fixes.  Well times have changed, and while Eat Sleep Play’s latest Twisted Metal offering isn’t their first online affair, it might as well should be.  Harnessing the power of the PlayStation 3, this latest game allows for the best realized version of Twisted Metal that has ever graced a console, if just for the wealth of options available to the player in this online era of gaming.

As its predecessors, Twisted Metal revolves around the over-the-top world of deadly vehicle based competition, where a mixed bag of contestants put it all on the line to win a single wish from the mysterious figurehead, Calypso. This trip into the world of Twisted Metal is a bit different than others.  Instead of the traditional every man for himself approach, the developer has opted to use factions, with leaders being popular characters from previous games.  Sweet Tooth, Doll Face, and Mr Grimm take center stage in the single player portion of Twisted Metal, and they’ll have henchmen along for the ride.

Telling the story of each faction, and their leader, you’ll progress through an increasingly difficult landscape of objectives.  From traditional deathmatch, to more rules oriented affairs, Twisted Metal offers a great deal of variety in the gameplay department in its single player portion.  It’s also the best place to learn the lay of the land and how to effectively use the wide assortment of weapons at your disposal.  Driven by cinematic cutscenes, Twisted Metal does have a story behind it, eventhough series creator David Jaffe would have you believe otherwise.  There are some moments throughout the campaign that’ll leave you scratching your head, and a few holes in the otherwise interesting plot, that’ll feel pretty familiar to fans of the previous games. Twisted Metal offers the same dark sensibilities as previous titles, but is probably best realized with the current generation hardware.

Alot of the fun in Twisted Metal derives from the sheer wealth of options that you have.  Customization will allow you to not only select your starting vehicle, but back-up vehicles and their weapon load-outs.  These can be called on mid-match if your health gets low, and are accessible via a garage found somewhere on the map.  If you can make it there, you’ll give your vehicles a chance to repair, and give yourself a new lease on life with a fresh vehicle.  While you start out with a pretty nice set of starting vehicles and weapons to choose from, you’ll also earn powerups along the way, which can be used depending on personal customization preferences.  Powerups and ammunition caches are found throughout the game’s maps and it’s imperative that you walk the line between offense,defense and supply gathering if you want to win.  That’s Twisted Metal in a nutshell really, but with chaotic and fast paced gameplay, devious rule-sets placed on the players, and other variables found in Twisted Metal, it never really feels that simple.

There’s no doubt that the game benefits from the raw power of this generation of consoles when comparing it to other Twisted Metal releases.  Maps are large and expansive, there’s a ton of destruction, and there’s just a lot more to see and do in each area than ever before.  Environments range from rural settings, suburban locales, and even a stadium that changes landscapes on the fly with traps at every turn.  With each map being quite large there are plenty of nooks and crannies to explore, giving you ample opportunity to find those perfect getaway spots or places to corner your competition.  Learning the maps and lay of the land is best suited for the early levels in the single player portion of the game, but this edition of Twisted Metal is all about online multiplayer.

There’s really nothing quite like Twisted Metal in the online multiplayer world today.  A handful of developers have tried the car combat thing, but none have seemed to nail it in the way that Twisted Metal does.  Again, it boils down to the sheer wealth of options for players.  Between the wide array of starting vehicles and the standard and optional weapons that are available on all, there are a lot of variables that can mix up surprising results on the field of play.   Plus, playing against human opponents is always more fun than playing against A.I.  Again, in the multiplayer arena you’ll find there are a good amount of game modes to choose from whether you are a lone-wolf style player, or tend to gravitate towards team based games, there’s definitely something for everyone in Twisted Metal.  Much like guns are balanced in other online affairs, Twisted Metal relies on a delicate balance between slower more heavily armored vehicles, and faster more nimble yet weaker vehicles. For the most part, balance in the game feels spot-on.  Of course, you’re going to feel the pain of your weaknesses if you choose to travel to the extremes of each class, whether that be limited mobility or what feels like little to no armor.  But whatever your playstyle is you’ll find something for you in the car classes of Twisted Metal.

A full featured set of online additions like global leaderboards and functional lobbies complete with the ability to chat with fellow lobby dwellers round-out the incredible suite of options on the multiplayer front.  It’s as full featured as any other multiplayer game on the market, and offers all the features that you would expect from a self-proclaimed multiplayer-centric affair.  Play just a handful of rounds and its hard not to get sucked into the world of Twisted Metal almost instanteously. The game will have you leveling up, earning XP, and even bonuses like new vehicles, weapons, skins and more. Whether you’re playing with friends or going it alone against the crowd on PSN, it’s hard not to have a good time with Twisted Metal… when it’s working that is.

It’s one of the biggest problems that we’ve found with the game so far.  Online connectivity is hit and miss for the title, and with multiplayer being such a big draw for Twisted Metal it’s hard to stomach it being nearly completely broken at this point.  But as said above, when it works, it’s fun and their nothing like it on the market today.  Hopefully these issues are ironed out as soon as possible.  Outside of the technical hiccups on the multiplayer front, it’s hard to fault Twisted Metal for much, as it draws on many of the great things that made the historic games in the franchise so good.  But, some of the new inclusions that Eat Sleep Play included in the single player portion of the game, just don’t work very well.  Rules based modes within the confines of the story really break up what could be a monotonous single player portion, but some of them work better than others.  Namely the racing style modes, which are nearly as broken as the netcode at this point.   Boss Battles, another new inclusion in the game, feel somewhat out of place.  And while they are epic and cinematic, they are a mixed bag.  At many times you’ll feel like you completed one just by chance, and not by skill. None of these “problems” really feel like they take the fun out of the core gameplay of Twisted Metal, but feel more like imperfections than they do fun stoppers.

Twisted Metal capitalizes on the very things that have made it a stand out for the PlayStation for so many years, yet again. The dark and “twisted” reality that is the game’s backdrop still melds well with the over-the-top vehicular combat in a way that feels unique to this game, and familiar for fans of previous games. On the assumption that Sony and Eat Sleep Play will get their online act together in the coming days, it’s hard not to recommend this to anyone that enjoys the trappings of some friendly online chaotic action. Because Twisted Metal has it in spades…when it’s working that is.