Unravel has been breaking with expectations ever since it was initially unveiled at E3 2015. An indie developed, 2D platformer based around a cute new character was shown off for the first time on the same stage that would later deliver Hoop Gawd, and a plethora of annual sports game entries. From the first moment that the game was shown, it was obvious that there was something different about Unravel, and its main character of Yarny. It seemed to not only be a gorgeous game, but also a very personal one, with a small team of developers that appeared to be putting their all into delivering a great gaming experience, while also touching on some big emotional elements at the same time. The final game hits all of these notes that the pre-release hype set up and more, creating a new fantastic video game character in the process.

Unravel is all about Yarny, its main character and mascot of sorts. The handmade creature is pivotal in the appreciation that players will have for the game, as his entire look and mannerisms come together to create the emotional impact that the game delivers. That impact also comes from the story in many cases, which is subtle in its methodology, letting players dive into its depths, or avoid it as they wish. 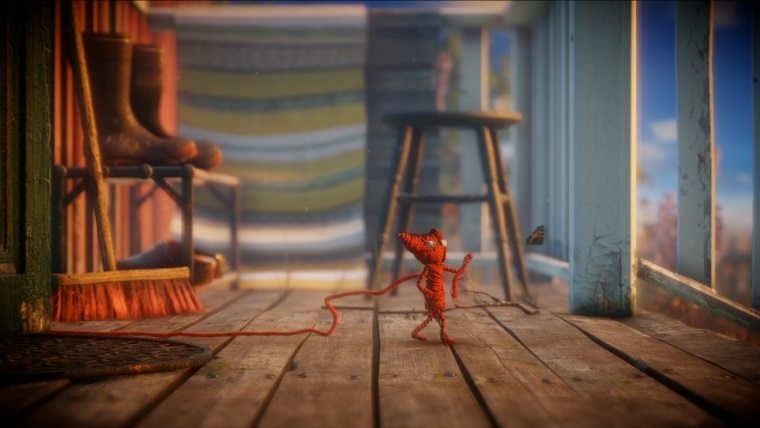 Essentially, Yarny is brought to life in the home of an old woman before setting out on an adventure to piece together her family memories. The story itself isn’t some grandiose thing, and it isn’t really made in a way that players will understand how event A leads to consequence B, which ultimately led to C happening. It also isn’t a “save the world” sort of tale, instead focusing in on a very personal story and giving a much more relatable experience for players.

This experience is presented very ambiguously, allowing players to decide how it all fits together, and what the overall meaning is. There is definite depth here, but it feels like the sort of game that will mean different things to different players, and could even change each time players return to it, as they look at the narrative through the lens of their own experiences.

Throughout Yarny’s adventure, players traverse through varying environments that change through the seasons. Starting out in the Summer, players will get to experience all four seasons before reaching the conclusion of Unravel. Each level has a different theme and setting, which can get quite interesting as the game progresses. The woods have a distinctly different feel than the beach, which is a stark contrast to the abandoned strip mine that players will explore later, with each level presenting a very unique atmosphere, as well as interesting gameplay opportunities.

Unravel doesn’t just play out like any 2D platformer. Its main concept, that of having Yarny constantly trailing a thread of yarn and unraveling as he does so, actually ties into the gameplay quite a bit. First off is the fact that you have to manage your trailing thread, making sure it doesn’t get wrapped around objects, or stretch too far. This will keep Yarny from running out of yarn before the next checkpoint reinvigorates him. This doesn’t come up so often, it could have become annoying if it had, but should always be in the back of your mind as you move through the level, as you don’t want to have to backtrack to unwrap yourself from around a tree branch or something. 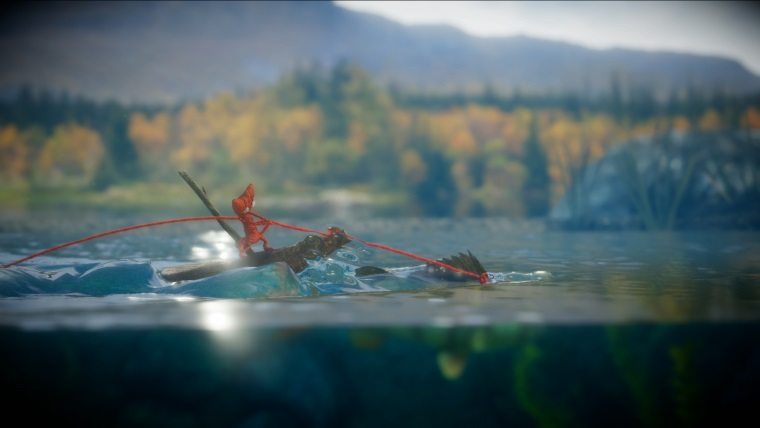 Tying off your yarn helps with this, while also being one of Yarny’s most important abilities. Whenever you see a red knot of yarn you can interact with it in various ways. This includes throwing some yarn onto it, and using it as a rope swing, grapple hook, or pulley of sorts. Once next to it, whether in the air, or on the ground, you can tie your yarn to it, creating a solid place from which to explore other areas, or progress onward.

These abilities are all also used for various puzzles found within Unravel. Puzzles usually pop up in 2D platformers these days, but Unravel actually puts a heavy emphasis on them, utilizing your abilities, as well as a very refined physics engine to facilitate some intriguing and tough puzzles to solve. Figuring out how best to tie your yarn to various spots, while figuring out where to move a specific object can be both fun and challenging. Some of these can become frustrating though, as they rely on expert timing, or trial and error, but overall the puzzles here are quite enjoyable.

Trial and error does pop up elsewhere in Unravel though, and in less fun ways. A lot of areas of the game feature instant death traps, which you can usually figure out how to bypass after one or two deaths, though a third or fourth could happen if you don’t pull off whatever tricky maneuver they require. In a way, it’s nice that Yarny doesn’t have a health meter or other video gamey sort of mechanic, but watching him die over and over again can easily take you out of the emotional journey that the game so meticulously set up, especially if it happens on the rare occasion where a checkpoint was not placed well. Death isn’t bad in and of itself in Unravel, but when it happens so suddenly, and without much way around it the first time, it feels a bit cheap. 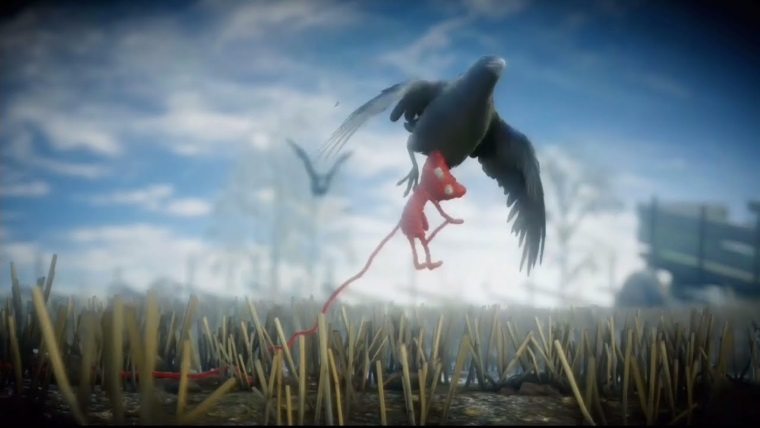 Even with the trial and error deaths, the gameplay is still quite engaging. In many ways it shares similarities with Limbo, which is a huge compliment as that game was superb. More physics based platformers can falter quite easily, delivering unresponsive controls, and offering little fun in the way players interact with the environment. Unravel however utilizes its unique elements, such as Yarny’s various yarn abilities, while also having tight, responsive, and yet physics-based movement.

Fun gameplay isn’t quite enough to stand out in the crowded indie platformer market though. Luckily Unravel also features one of the better visual presentations out there for a game like this, offering both variety as well as quality in its graphical appearance. Each new environment seems to offer something new, whether its bright outdoor environments, or dark cave-like tunnels, or even the bowels of huge machinery. The lighting is of particular note, as it helps evoke the proper atmosphere for the scene playing out nearly every time.

Even better than the visuals though, is Unravel’s music selection. The music in every level is extremely pleasant, while pushing the game to new levels of immersion. Inspired by local Swedish folk music, the soundtrack to Unravel is a true delight, one which many players will want to revisit even outside of the game. However, the way it flows in-game, and how it matches up with what is going on on-screen is the truly impressive part. 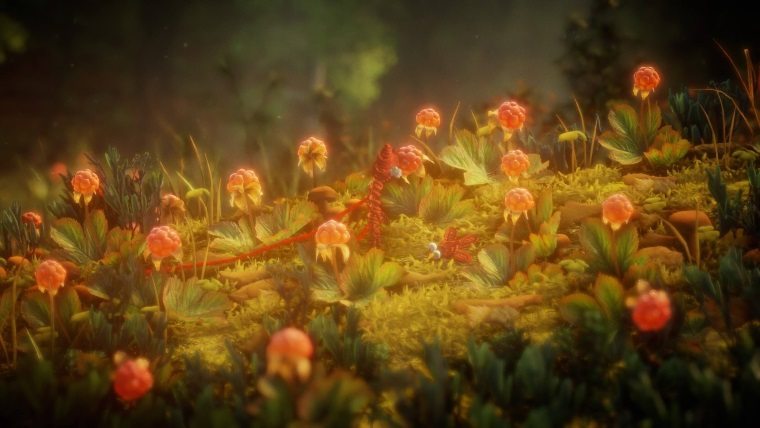 The only unfortunate mistake in the audio presentation is that transitioning from one section of music to another can be janky, especially if Yarny is moving quickly, or travelling in a way that seems counter to how the game expected. One song might jump to another in a very artificial way. With them all sounding so great, many players won’t mind, but it can break the delicate immersion that Unravel usually delivers so well.

Unravel is an endlessly surprising game in so many ways that it’s tough to pinpoint exactly what makes it all work so well. It feels like the game equivalent to your favorite art house movie, where it speaks a message that is both universal, and yet completely personal to you. Even beyond the artistic, the game functions well on a technical level, delivering both great graphics and fantastic music, while also hitting on some great gameplay. Trial and error deaths get in the way, and some puzzles might frustrate, but overall Unravel is a triumphant experience from start to finish.