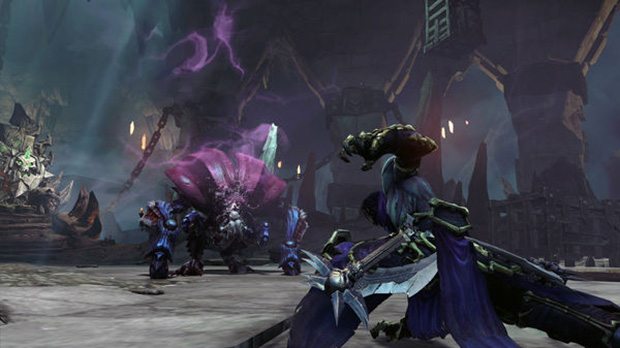 Following last week’s announcement of the brand new Crucible Arena mode that accompanies the main storyline of Darksiders 2, Vigil Games has released a new trailer showing what to expect from the new mode. A developer led walkthrough explains the ins and outs of this new game mode, and why surviving the crucible can earn you epic gear if you can make it through the entire 100 wave battle.

Awakened by the End of Days, Death, the most feared of the legendary Four Horsemen, embarks upon a quest to restore mankind, and redeem his brother’s name. Along the way, the Horseman discovers that there are far worse things than an earthly Apocalypse, and that an ancient grudge may threaten all of Creation . . .

After completing five of the mode’s 100 unique waves, gamers will be given the option of taking a prize or continuing for another five waves for a chance at even better items.

However, if they fall in combat they will leave with nothing. Only the most skilled players will have what it takes to best all 100 waves and claim the greatest prizes.

In addition to this mode, Darksiders II will feature a New Game+ mode which will allow players to carry over their Death for a new game retaining all of their skills and equipment.