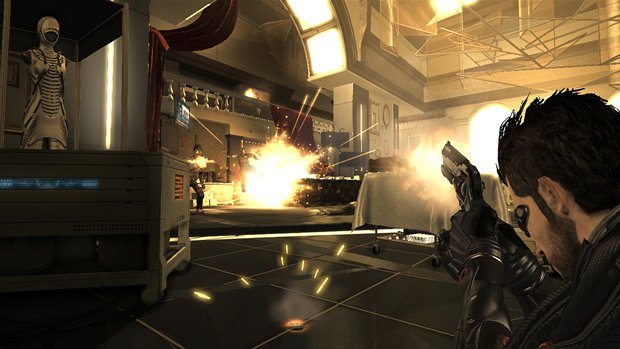 Coming into E3, one of the titles we heard quite a bit of buzz about but have not yet seen a whole lot of is Deus Ex: Human Revolution. The game’s lead director, Jean-Francois Dugas, stopped by the IGN E3 booth to show a short demo of the game. There isn’t much gameplay circulating around, but what’s shown here looks very good. In terms of what we know of the game’s story, the protagonist will be Adam Jensen, a private security officer with Sarif Industries which is a leading company that specializes in human augmentations. After he witnesses a horrifying  attack on his company which leaves him with life-threatening  injuries, he is forced to undergo augmentation in order to survive. These mechanical augmentations will be divided into four types: Combat, Stealth, Technology and Social and depending on which ones you want to use, they will heavily impact the way you play the game. Unlike the previous titles in the Deus Ex series, Human Revolution will feature a regenerating health system.

The game will in fact be a prequel to the original Deus Ex, and will take place during the year 2027, 25 years prior. The player will visit five cities over the course of the game including Detroit, Shanghai and Montreal. Jensen will also have his own apartment where he can store collected information. The events of the game will reportedly lead to the formation of UNATCO from the original.

You can watch the video below. The guy running the demo plays a little too stealthily for my tastes though. I probably would have went into each room with guns blazing. Deus Ex: Human Revolution hits stores this August.