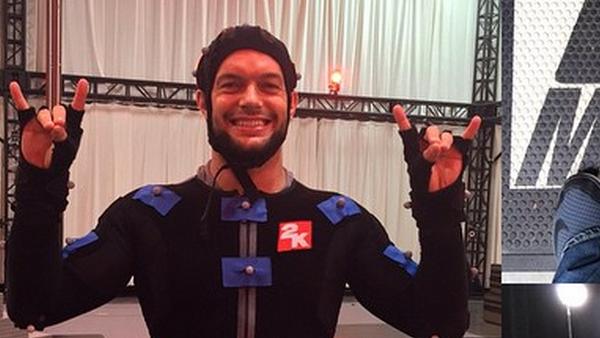 2K Games has released a short behind the scenes video of Finn Balor working on WWE 2K16.

It’s great to see that Fin Balor will be mo-capping his very own moves into WWE 2K16. This means his wrestling moves will look very accurate.

The video was short, but I managed to see some of the moves that Finn Balor recorded for WWE 2K16. One of the moves was a simple chop against the ring’s turnbuckle.

The second move he recorded in the video was a “Dragon Sleeper”. That’s all that was shown. It’s likely Finn Balor recorded several of his other moves in WWE 2K16.

Damien Sandow is another current star from WWE that mo-capped moves in WWE 2K16. The rest of the mo-cap team consisted of former or independent wrestlers.

Photos surfaced earlier this year that Low Ki and Evan Bourne in mo-cap suits recording several wrestling moves. Those are the most notable names that are known to have worked on the game.

WWE Superstars and Divas are usually too busy to fly down and do the mo-cap work on each game. You never see the likes of John Cena and Randy Orton doing it. Someone like The Rock on the other hand is too busy to even get scanned.