Yes, Microsoft has gone ahead and gotten cozy with the NFL. The companies have reached a partnership which was announced back at E3, bringing NFL.com functionality to the console. It allows users to track fantasy football stats and other sports data on their consoles.

Here’s what Microsoft had to divulge recently about the new partnership:

“Tailored for you, the NFL on Xbox One will deliver the best of the NFL, in a way that will completely reimagine the way you experience football from the comfort of your home. Only Xbox One can bring interactivity to live games, stats, scores, highlights and your NFL.com Fantasy Football team all together on the best screen in the house – your TV. Xbox One will personalize your NFL experience, for your team, with the best content the NFL has to offer including NFL.com, NFL Network, and NFL RedZone. Whether you’re watching the game or not, Xbox One makes it easy to keep tabs on the league with Snap mode. You can watch live TV, play games, or watch movies, while simultaneously tracking your NFL.com Fantasy Football team, or checking in for the latest scores and stats.” 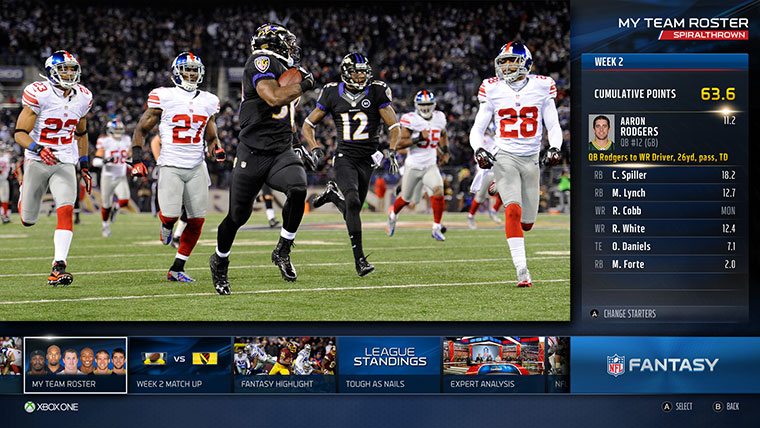 And just look at how much fun Derek Yu is having. He’s all-in on the fantasy experience. He’s gone and moved his entire living room out onto a rooftop deck to play fantasy football and demonstrate his graceful winning ways through the Kinect. You can be Derek Yu later this year when the Xbox One launches on November 22nd.