The latest news in the world of video games at Attack of the Fanboy
March 23rd, 2017 by Dean James 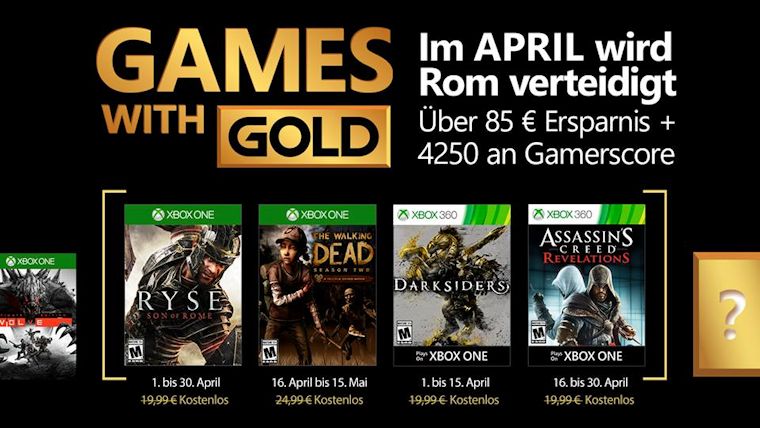 March has flown by and April is on the horizon and that means it is about that time of the month where the free game announcements for subscribers to services like Xbox Live and PS Plus come out. While it may have been meant to be announced later today or even next week, it appears we have gotten our lineup for Xbox One in April already by someone that jumped the gun.

As has happened in the past, one of the foreign variations of Xbox, this time Xbox Austria, accidentally announced the full lineup of Games With Gold for April in a post on both Facebook and Twitter this morning before deleting it from both.

As with nearly everything on the internet though, multiple people caught it before it was removed, including the usual image that Xbox uses to make the announcement. According to this early post, it looks like April is going to be a solid month with good games all around.

The two Xbox One Games With Gold titles for April look to be Ryse: Son of Rome and The Walking Dead Season 2. Ryse: Son of Rome was a launch title for the Xbox One and was one of the games to really show off the graphical prowess of current-gen consoles when it came out. The Walking Dead Season 2 is great for those that already played through Season 1 and never got a chance to get 2, which is even better with it being in the middle of the third season currently.

Considering this came from one of the official Xbox sources and had the full image included, this seems all but certain to be the lineup for April. The only problem would be if there was a regional difference on a game, which is usually not the case. If the past is any indication though, there’s a good chance they will just go ahead and make the Games With Gold announcement today after this leak since it’s already out there.