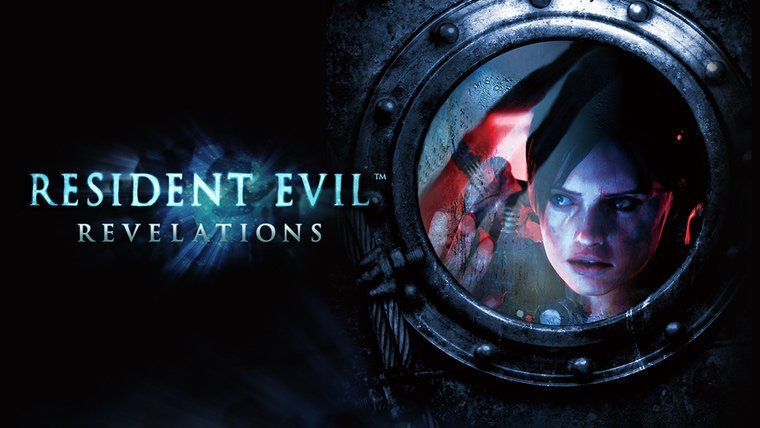 Nothing is absolute in the videogame industry, and Capcom’s Resident Evil series is starting to gain a reputation for its supposed console exclusives that end up appearing in a vast number of platforms shortly after. In the case of Resident Evil: Revelations, the 2012 Nintendo 3DS “exclusive” made the jump to PS3, Xbox 360, and Wii U only a year after, with an HD version that greatly boosted its graphics. Now yet another revision takes the game into the current generation of consoles, with players being offered a ticket to the smoothest trip aboard the Queen Zenobia yet.

At some point between Resident Evil 4 and 5, Jill Valentine and her partner in the BSAA Parker are assigned to a new mission that consists on investigating the disappearance of Chris Redfield and his parter Jessica aboard the luxury cruise ship Queen Zenobia. When Jill and Parker arrive to the location, a deadly silence welcomes them, only broken by the guttural sounds of horrible creatures mutated from the passage and crew. As usual in the series, the mission turns out to be quite different to what they were expecting, and the story explores some personal issues of the characters, like why aren’t Jill and Chris partners anymore?

Revelations takes a very interesting approach to its narrative, which consists on altering the order in which the story is played. That means, every chapter can switch the point of view to a different set of characters in a new location, and even another time. While this could have hurt the pace of the game, in this case it serves to keep the story intriguing and fresh.

This narrative style would have been of no use if the story itself was not interesting, however, Revelations keeps players hooked thanks to the appearance of the iconic original pair of heroes of the franchise, as well as achieving a sense of urgency and high stakes, which is not easy to do when you are telling a story that players know is going to turn out fine for mostly everyone, considering that Jill and Chris are still alive and well in Resident Evil 5. 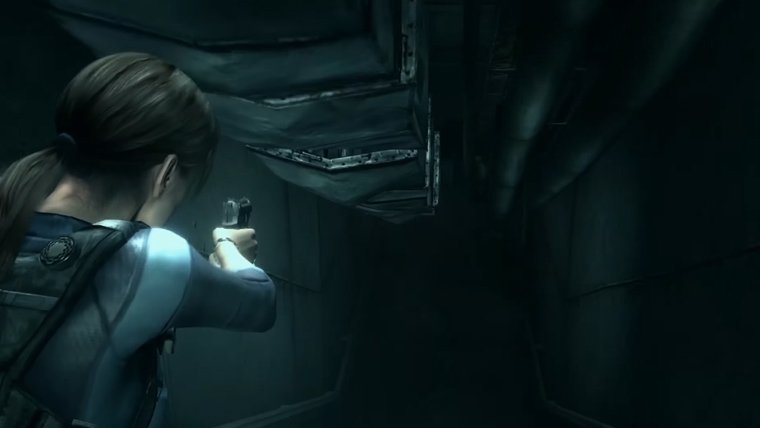 Newcomers Parker and Jessica are fine additions to the ever-growing cast of the series, although they fail to make a truly memorable impression for better or worse. Parker feels like the most grounded of the two and the one with whom players might develop more empathy, although this doesn’t come as a surprise seeing as his role as the protective partner with a big heart has been unshamedly written imitating Barry’s part in the original Resident Evil. In contrast, Jessica feels more distant and less experienced, and her role in the story is more akin to the weaker link in a love triangle rather than the protagonist of an action game.

But Resident Evil Revelations is a story more about organizations and conspiracies rather than character development. The four main heroes belong to the BSAA, a group that actively fights bio-terrorists, and currently accomodates most of the classic protagonists of the series. However, Parker and Jessica are shown in the past as members of the FBC, a commision formed by the government to handle situations of biological threats.

The key to the events of Revelations seems to be in a bio-terrorist incident in the floating city of Terragrigia, which was resolved in a similar way to the Raccoon City outbreak and brought the dissapearance of the bio-terrorist group Il Veltro. However, the new rise of Veltro years later and their focus on revenge seems to put in doubt the FBC’s true role in the Terragrigia incident.

This might sound like a confusing mix of acronyms, and it certainly feels like a way to compensate the simplicity of other parts of the script, but by giving these organizations a bit of a backstory, the game manages to influx some character in them, as well as enriching this post-Umbrella universe. And as the villain group, Veltro feels like a more grounded and realistic player in the current world of the franchise, compared to extravagant individuals like Salazar, Excella, or Derek Simmons. 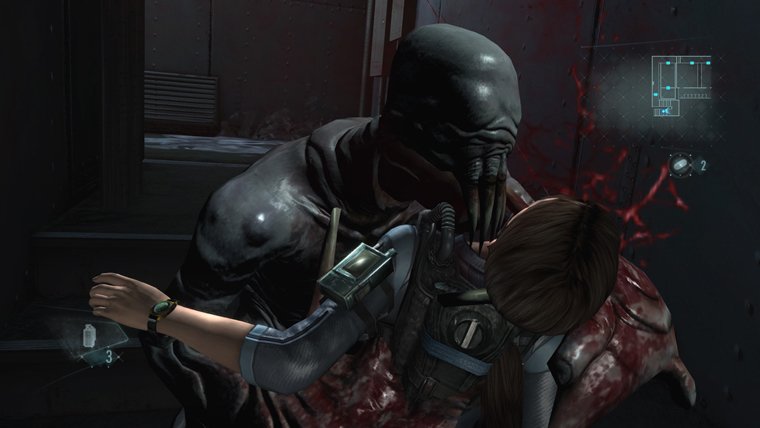 Capcom conceived the Revelations sub-series as a modest-budget alternative to the mainline games that would try to appeal to fans of the original horror style of the first trilogy, while also retaining the numerous players of the more action-oriented games. The result is a title that does fill out many of the boxes in a horror game’s ‘to do’ list, but it never actually feels like one.

Those elements from the survival horror essence that were put into creating this game are namely a dark, isolated location that plays out like a puzzle, an interesting but easy to follow plot reminiscing of Hollywood films, and a morbid curiosity to see what next monstruosity will be thrown at us.

However, it’s not the same to gather those elements together as to know how to use them. And this is where Revelations falls short from becoming a much more realized proposition. For the most part the Queen Zenobia looks like a beautiful, claustrophobic location, but the generic design of most areas breaks the illusion of being trapped in a real place. This is definitely the aspect hurt the most by the modest graphic origins of the game, as remasters can only go so far into improving the original work. It doesn’t matter much that you find one impressive location every hour of the game when most of the time is spent in tight corridors deliberately dark in order to hide the lack of details.

The simplicity of the layout also affects the difficulty of the puzzles, as the route to find the next key item is usually the only option available, turning a big part of the game into an automatic process of moving forward eliminating any threat on the way.

To aggravate the situation, the game forces players to extensively revisit earlier locations after the first hours, becoming more predictable and losing that fresh feeling of constantly finding new areas. It is true that these new visits open new rooms or introduce new villains, but one can’t shake the feeling that the budget simply didn’t allow developing more areas and instead the team had to introduce these mechanics in order to extend the duration of the game. Thankfully, this could have been a bigger issue if the story and gameplay didn’t make those second or third runs worthwhile, but it is definitely a point when the game stops surprising the player and gets more repetitive and tiresome.

What stands in our way of running through those areas placidly will obviously be a new set of creatures mutated from the latest bio-weapon in the market. This new agent in particular is called the T-Abyss, a new form of the classic zombie-maker virus that turns its victims into a slimey fish-related creature. With some designs that clearly borrow ideas from John Carpenter’s The Thing, these enemies act more similarly to the slow zombies of the original trilogy rather than the more furious Ganados from Resident Evil 4 and 5, which makes sense, since most spaces in Revelations consist on tight corridors that can easily be blocked by the Oozes. The more open areas introduce faster enemies like dog zombies, or other creatures that can attack from the distance. 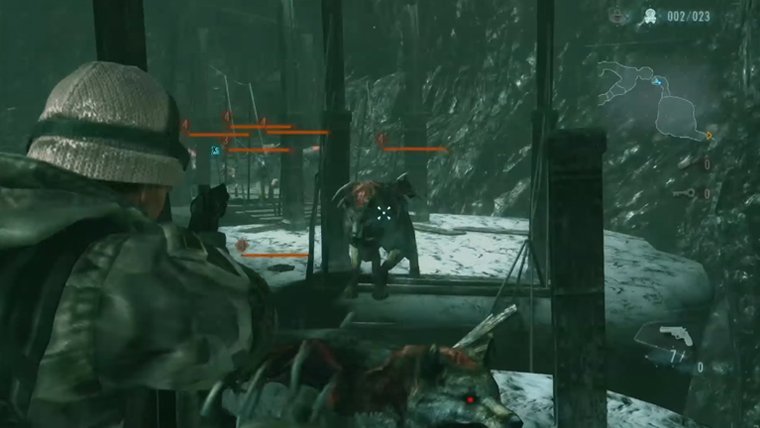 For better or worse, the controls are directly imported from the action-oriented entries, and that has its pros and cons in a game that frequently puts you in tight spaces. In many occasions the over the shoulder camera stays too close to the character, making exploration and running away a slightly confusing task, as we cannot see as much of the environment as necessary.

The lack of a running function is also noticeable, which in Resident Evil Revelations 2 for PS4 was made by keeping the X button pressed. It’s not really essential here, as the areas don’t allow for as much movement in this entry, but it would have been a welcome addition in the phases when you have to run away from bosses or go through long corridors.

Beyond the main adventure, a big part of the appeal for the Revelations games belongs to the Raid Mode, a single and online multiplayer experience in which players get to pick a character from a wide selection and go through different stages eliminating hordes of enemies. In contrast with the tense atmosphere of the main adventure, the Raid Mode is much more oriented to action and the thrill of eliminating many enemies in shortest time possible. And it’s not just a mindless entertainment, as the experience earned in each of the stages will allow us to upgrade our equipment and obtain extras. This will definitely become the main reason to revisit the game well after we have completed the story. 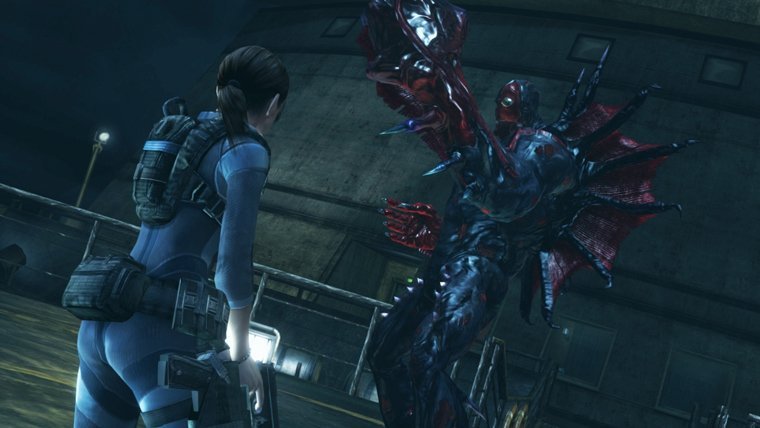 So, what does Resident Evil Revelations has to offer to gamers in 2017? Well, for instance, the new PS4 and Xbox One versions now run at a smooth 60fps, compared to the 30fps of the PS3 and Xbox 360 versions from 2013. The game now includes all the DLC that was sold separately in the previous versions, and Raid mode presents more of a challenge for seasoned players thanks to a new variation of the Ghost Ship stage called Chaos with level 70 enemies, apart from more powerful weapons, and new custom parts. This is certainly a welcome addition that makes this the most content-filled version of the game so far, although perhaps these Raid mode-focused features will only seem appealing to the most hardcore players.

The main issue with Revelations nowadays is how it fares compared to the other Resident Evil games available in current platforms. The 2014 sequel Resident Evil Revelations 2 surpasses this first game in every single aspect, offering a longer, bigger game with a more developed and varied gameplay that adds local multiplayer for both the campaign and Raid mode. This first game contains the seeds of all of that, but it simply doesn’t take advantage of them.

At the same time, the marketing strategy of presenting Revelations as a return to the roots of the series has been debunked by Resident Evil 7, a game that truly takes the horror essence of the series and adapts it into the modern landscape, as well as the HD Remaster of the first ever Resident Evil, which is probably the greatest incarnation of the original survival horror mechanics.

That leaves Revelations as a game that is not as scary, fun, or interesting compared to literally any other new or remastered Resident Evil released in this generation, but it’s still enjoyable on its own.

Resident Evil Revelations is a fun and captivating game that unfortunately has been surpassed by every other entry that has come afterwards. For players who still want to give it a try, it offers a unique and suspensful setting, sinister enemies, and a reunion with two of the most iconic characters in the series, all of that in the most content-filled version so far. But for a casual player who has not gone through the majority of Resident Evil games, there are much better options out there.

Worst Call of Duty Games of All Time, Ranked

Is Nemesis Worth Rolling for in Tower of Fantasy?

What Episode of One Piece Does Ace Die? Ace Death, Explained
Posting....