The latest news in the world of video games at Attack of the Fanboy
October 3rd, 2017 by Alex Grantz 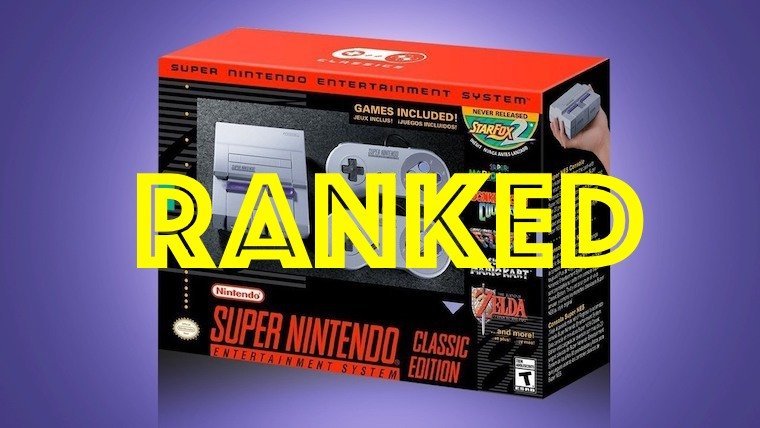 After spending many, many hours with the SNES Classic Edition I feel it’s the right time to rank the included games. It’s important to note that there are very few weak links in the bunch. Nintendo did an amazing job of compiling many of the best games of the 16-bit era for the release of its new old console. And with the Virtual Console nowhere to be found on the Switch, this is currently the best way to get your classic Nintendo gaming fix. Undoubtedly, some people will not agree with me, and that’s great (except you’re wrong!!!). I would love to hear what you would change and why. Feel free to let me know in the comments below. Anything else? No? Great. Here we go.

2. The Legend of Zelda: A Link to the Past

These three games are impossible to rank because they are three of the best games of all time. They complete an incomparable trifecta. If Super Mario World is a 100, The Legend of Zelda: A Link to the Past is a 99.9 and Super Metroid is a 99.8. It’s that close. I originally had Metroid at 2 and Zelda at 3, but I just couldn’t live with myself. There is no way A Link to the Past is the 3rd best game. It’s just too good.

Super Mario World is platforming perfection. To me, it’s the best entry in the mainline Mario series of all time. The amount of secrets to discover is astounding. And the music. The music! The ghost houses used to scare the hell out of me when I was 4 years old because of that creepy music.

Super Metroid is one of the most satisfying games to complete. I love the ending of this game. It’s easily the best Metroid game of all time and it holds up so, so well.

If you were lucky enough to snag a Super NES Classic and you have never played any of these three games, you need to stop what you’re doing and play through them NOW.

Alright, I might catch a little flack for ranking this game ahead of some of the other straight up classics on the SNES…uhhh…Classic, but let me make a case. This is my favorite RPG of all time. It was developed by Square, the company behind Final Fantasy, and it was released towards the end of the Super Nintendo’s lifespan. It was a legitimately hard game to track down so not a ton of people had the opportunity to play it. But man does it hold up. This is the first game that allowed Mario and Bowser to team up together!  It also features a cast of truly memorable supporting characters – fans of the game still hold out hope that Geno will eventually become a playable character in Super Smash Bros.

Donkey Kong Country is nothing short of groundbreaking. It completely reimagined the Donkey Kong brand and kicked off a series of games that have stood the test of time. It’s a real shame that DKC 2 & 3 weren’t included on the SNES Classic. DKC 2 is even better than the original and DKC 3 is right there with it.

Mega Man X is my favorite Mega Man game of all time. I couldn’t even guess how many times I’ve plowed through this game. It provided a breath of fresh air in the aging Mega Man franchise. What kind of fresh air you ask? For starters, instead of naming every robot boss _______ Man, Capcom decided to name the bosses things like Chill Penguin and Storm Eagle. Oh, and Boomer Kuwanger. I still have no freakin’ idea what a Kuwanger is. Mega Man X also featured armor upgrades and a supercharged arm cannon shot. The old arm cannon shot could simply be charged, but the supercharged shot is where it’s at.

While I completely disagree with labeling this game as a sequel to Super Mario World, that does not take away from how great it is. That cry though, Baby Mario. Someone needs to shut that kid up.

Damn. Nintendo seriously went above and beyond making sure the RPG quota was met on the SNES Classic.

Contra III: The Alien Wars is easily the best Contra game ever made. Super Castlevania IV took what made the first three Castlevania games great and improved every aspect of them. It’s challenging as hell, but that doesn’t make it any less fun.

The best version of the best 2D fighter of all time.

Another incredible RPG that easily takes over 30 hours to complete. I still can’t believe this made the cut. Good job, Nintendo.

I feel like no one will be happy with me putting the original Mario Kart at #13. But look, it was a really amazing game at the time. It has not aged well though. It is SO FAST, but I happen to enjoy that aspect of it. Many people would argue it should be lower on this list, few would argue it should be higher. I’m sticking it at 13. It feels right. Moving on.

Don’t hate me for putting Earthbound under a boxing game and a racing game. But seriously, Super Punch-Out!! And F-Zero were a ton of fun to play back when they were originally released and still are today. I might be in the minority here (who am I kidding? I’m definitely in the minority on this), but I’m not the biggest Earthbound fan. It just doesn’t do it for me. I understand why some people like it, but it’s not for me.

So it’s come to this. A couple of Star Fox games and a couple of Kirby games down at the bottom. Look, I thought I loved the original Star Fox, but after playing it again I can confidently say I am not a fan of this game. Ditto Kirby Super Star. I feel like the Kirby games are made for a certain audience and it’s not me. However, I really hope I don’t feel this way when the N64 Classic eventually comes out and I fire up Kirby 64, because that game bangs.

Star Fox 2 is a cool thing to include on the SNES Classic, but there is a reason it was never released in the first place. I’m glad it finally saw the light of day, that being said, it’s not that great. The controls are horrendous and that brings the whole experience down. Bummer.

I have no idea why anyone would want to play Kirby’s Dream Course. I just don’t get it. It’s such an odd inclusion on the system when games like Donkey Kong Country 2 & 3 and U.N. Squadron were left off. Someone please explain to me how this happened.

There you have it! All 21 games included on the SNES Classic ranked from best to worst. Now excuse me while I get back to Super Mario RPG.