Batman: Arkham Knight Season Of Infamy DLC – Is It Worth It?

The latest news in the world of video games at Attack of the Fanboy
January 9th, 2016 by Dean James 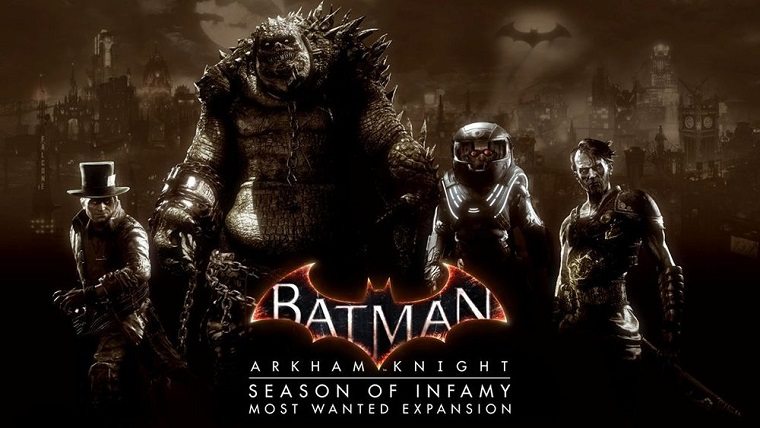 Batman: Arkham Knight released back during the summer of 2015 and had a lot of content in the main game, with plenty of side missions and everything. Alongside that came a rather expensive season pass that has underwhelmed for the most part since, but now has brought the biggest part of it with the Season of Infamy DLC, so the question remains, is it worth the money, either as an individual purchase or as a major part of the season pass?

Throughout Batman: Arkham Knight, there were a ton of side missions known as Most Wanted missions. These consisted of tasks like destroying Penguin’s weapon caches and finding captured firefighters, as well as the number of Riddler related missions. A few of these tied together and led to showdowns with villains like Deathstroke, while some others were more individual.

The Season of Infamy DLC basically adds four new individual Most Wanted sections to the game, each adding a familiar Batman villain that had no part in the game otherwise. This includes Ra’s Al Ghul, Mad Hatter, Killer Croc, and Mr. Freeze. To discuss these, we’ll go through each and describe a little of what you do in that certain mission and how worthwhile they feel overall.

The Shadow War Most Wanted missions revolve around the League of Assassin’s and the possible resurrection of Ra’s Al Ghul, who was thought dead after Arkham City. Without spoiling anything story wise, this mission mostly involves a bit of fighting and exploration, including one section where you follow a blood trail after investigating a crime scene. We also are introduced to a character that has gotten more popular in the last few years elsewhere, and makes their first appearance in the Arkham series here, which is a nice touch. There is also an interesting choice you get to make at the end of it, though in the long run it doesn’t really affect anything. Overall, Shadow War is pretty fun and will probably take you around 30-40 minutes if you don’t know exactly where you are going the entire time.

Wonderland is much less story heavy, as you start by finding Mad Hatter in custody at GCPD. You find out that he has captured three cops, which you must find in the city. After the third location, you will go back and interrogate Mad Hatter, which turns into a storybook setting that spans the locations of the three Arkham games, which is pretty neat. Overall, this one isn’t as fulfilling overall as Shadow War, but it’s still a fun one that features some madness, which is to be expected with this villain.

The third of the Most Wanted expansions in Season of Infamy is titled Beneath the Surface, which returns Killer Croc to the series. This one starts with Nightwing contacting you about a downed airship in Gotham’s harbor, which is actually the flying Iron Heights Penitentiary. The best thing about this one is the fact that you get to work together with Nightwing, including a few dual team fights. This one is fairly straightforward, with the exploring of the airship, followed by leaving to find a few keycards and then returning for a final fight. The fight is quite fun, as you face off against Killer Croc and enemies with both Batman and Nightwing. This one also has some of the better story twists that keep you interested.

While Shadow War might be the most involved overall, easily my favorite of the bunch has to be In From the Cold, which is no big surprise as Mr. Freeze always seems to bring the best out of Batman properties when we aren’t talking about Batman & Robin. This one is also story heavy, so I won’t spoil this one either, but needless to say it’s very heartbreaking and something that really needs to be played. This one features predator missions, search missions, and even a Batmobile fight, so there is plenty to see here. If you are done with all of your other Arkham stuff to this point, this is a good finisher for you as it really does a good job at closing out a storyline well.

The four Most Wanted expansions do vary in length a bit, with some complaints that it could be all done in an hour. That is if you are really speed running and know where everything is. Otherwise, it’ll probably last you and hour and a half to two hours if you’re taking your time and enjoying it. Personally, I really enjoyed each of these, especially the Mr. Freeze one.

The only real problem is that $9.99 may seem pretty steep for a few hours at best worth of content, even if it’s part of the season pass. However, the content here is quality and builds well on the game itself. If you are looking for some new content for Arkham Knight with villains that got left out of the main game, this is the perfect DLC for you. If you are looking for a lengthy focused narrative based experience however, you need to look elsewhere.

Home / Original Articles / Batman: Arkham Knight Season Of Infamy DLC – Is It Worth It?