BioShock: The Collection for Nintendo Switch is a Trio of Fantastic Ports 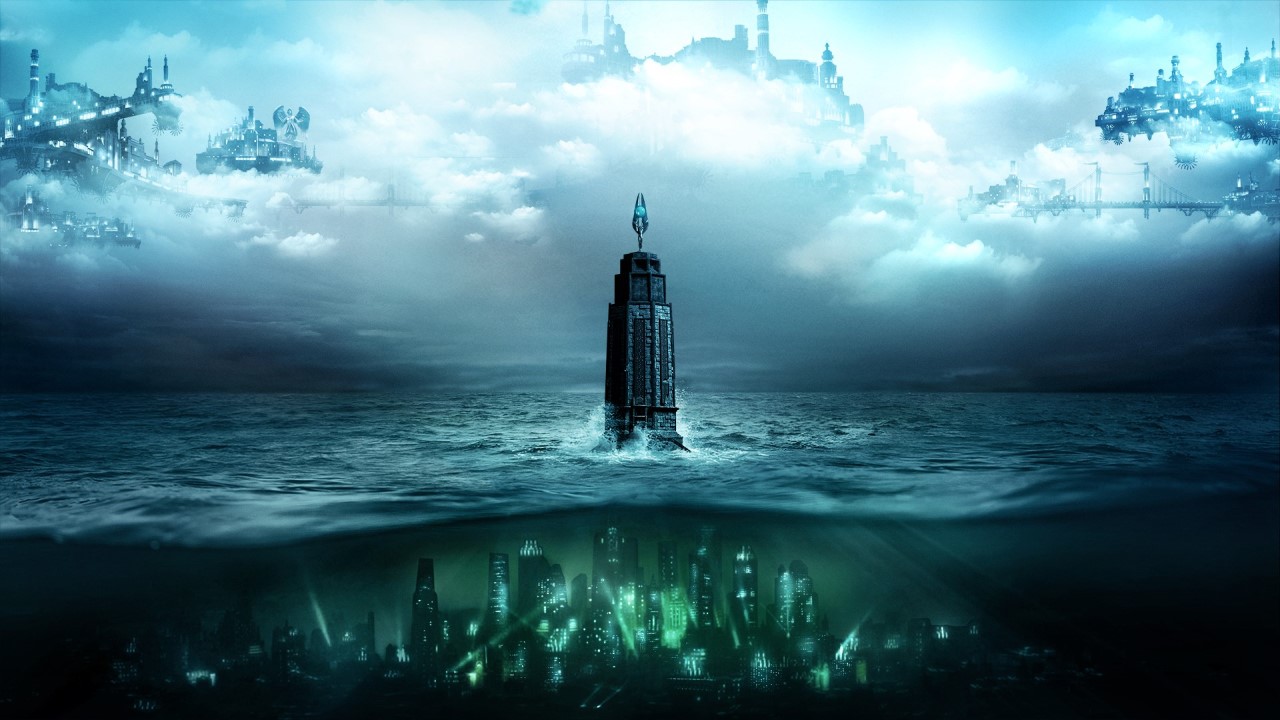 BioShock: The Collection has been around for four years now, but the bundle has only just arrived on the Nintendo Switch. While BioShock, BioShock 2, and BioShock Infinite all remain excellent games, a bad port is a bad port, capable of tarnishing even the best games’ luster. Thankfully, 2K and partner Virtuos have knocked all three games well out of the underwater park and into the stratosphere.

This being The Collection that was ported over means we’re getting BioShock: Remastered and BioShock 2: Remastered – with all their improvements and more questionable alterations. The work Blind Squirrel put into each remaster remains commendable, but many of their less worthy changes remain. If you took umbrage with the choices made in the remasters all those years ago then this second release will do nothing to calm your ire.

I bring this up, because all three titles run spectacularly on the Nintendo Switch without any dire graphical compromises. Sure, the remaster of the first BioShock culled much of the specular lighting that helped set the mood, and the audio mix remains evenly leveled and without reverb, but the art style has aged gracefully. New textures or not, the BioShock trio all remain easy on the eyes, and this has proven a boon for the Switch ports. 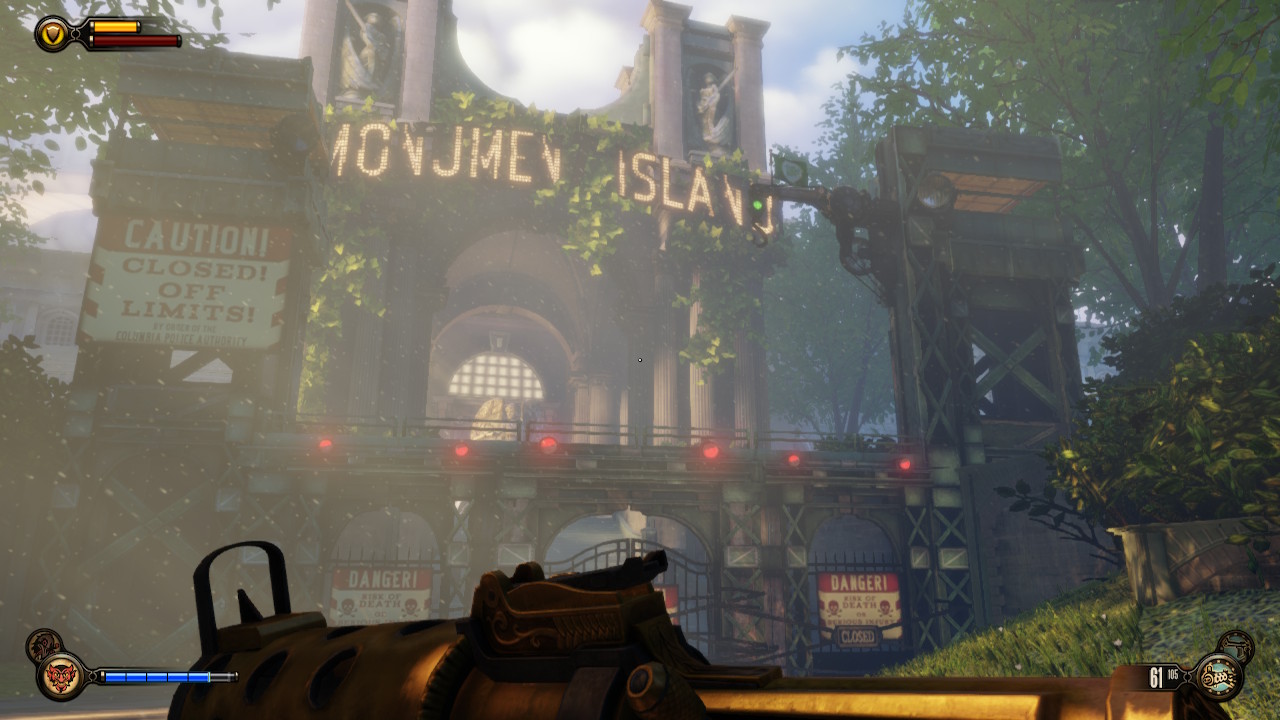 There are obvious graphical downgrades here, but you have to go out of your way to spot them. Texture filtering and draw distance are both lower (especially in Infinite), but Virtuos made it so textures would gently fade into view rather than abruptly pop-in, which makes the effect virtually unnoticeable while playing the games. Sure, you could always slowly walk forward and watch the assets transform from low-rez mud to high-rez spectacle, but the distance Virtuos settled on is as close to a Goldilocks range as they could get. Where the textures are lower resolution you’ll likely not notice, because your eyes aren’t being drawn to those locations.

Even lighting, an area most Switch ports axe with absolute abandon, remains largely intact in comparison to the other console editions of the games. Shadow maps are somewhat jaggier around the edges, but not near as much as you’d expect. Infinite’s lighting has taken the hardest hit of the three – being the most recent and graphically advanced of the three titles – with god-rays that have obvious shimmering and lower resolution, splotchier shadows.

Much like the texture filtering, the shadows do improve as you approach them, but their transition is more noticeable. Many of the dynamic shadows and global illumination remains intact, however. Infinite’s lighting on the Switch may not match what’s found on the PS4 or Xbox One, but it’s hasn’t been outright gutted either, as we’ve seen in a few other ports. Infinite on the Switch closely mimics what we saw at launch on the PS3 and Xbox 360, which isn’t a bad thing considering it was quite the looker even then thanks to its stellar world and character designs. 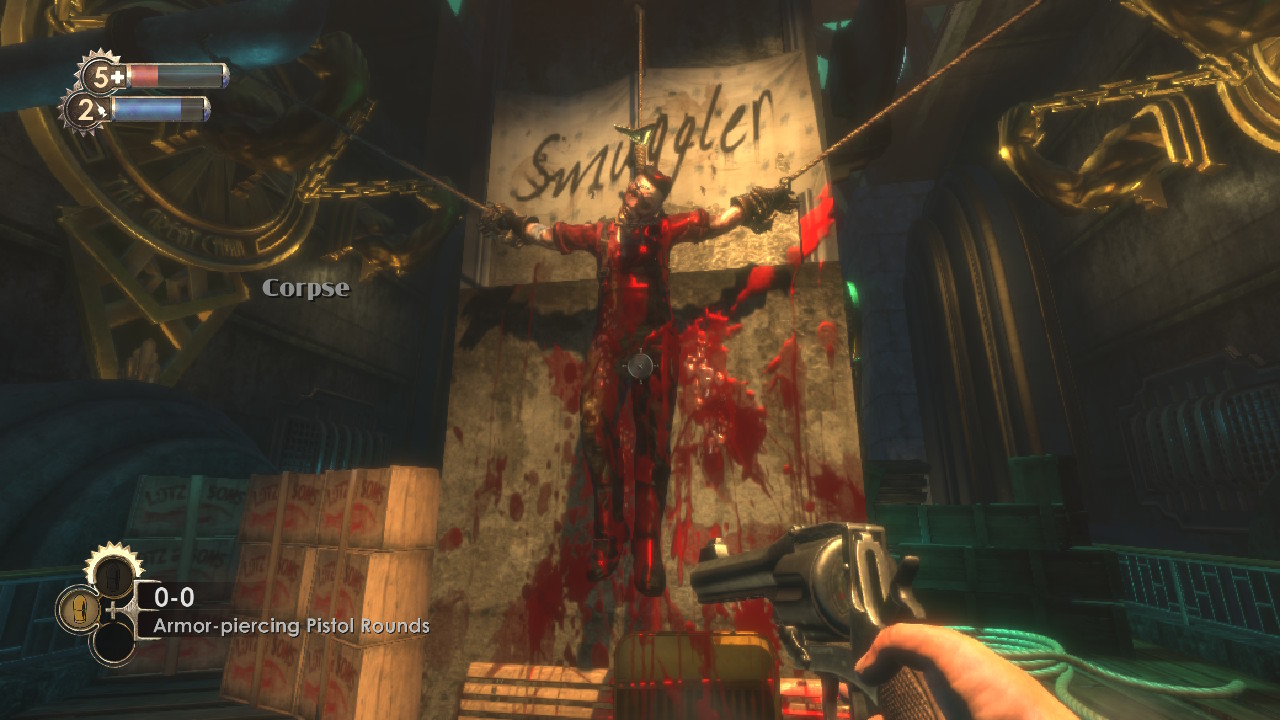 As for BioShock and BioShock 2 the textures, lighting, anti-aliasing, and other effects all look near identical to their PS4 and Xbox One counterparts. Again, there are downgrades here, but in motion they are difficult to spot. Popping the Switch out of the dock seems to disable anti-aliasing, and what appears to be dynamic resolution scaling does remove some of the crispness from the overall image (as seen in the image above), but on the Switch’s small screen this reduction in quality is largely masked. To be fair to Infinite, BioShock and BioShock 2 were heavily modified Unreal Engine 2.5 titles, and even with the remastered assets both titles don’t exactly strangle modern hardware, to include what’s packed within the confines of the Switch.

Infinite pushed further than those two with the Unreal 3 engine and utilized a more robust lighting engine. Out of the three titles within BioShock: The Collection it doesn’t come as a surprise to see Infinite received the bulk of the alterations. What is surprising is how well Virtuos managed to obfuscate and conceal those downgrades, and in turn ensured the game still looked wonderful in motion. As I said earlier, you really have to stop and look for the adjustments Virtuos made to each game, Infinite included. The lighting changes are easier to spot, for sure, but Infinite still looks great in both docked and handheld.

Of course, all the graphical adjustments, both vast and slight, don’t mean Jack if performance is atrocious, and that’s mercifully not the case here. All three games run at a capped 30 frames-per-second, and they all hit that mark at damn near all times. There was the rare hiccup here and there (and Infinite still suffers from a stutter or two on occasion, thanks to Unreal Engine 3’s notorious texture loading issues), but by and large all three games ran at the 30 FPS cap with buttery smooth frame-pacing. 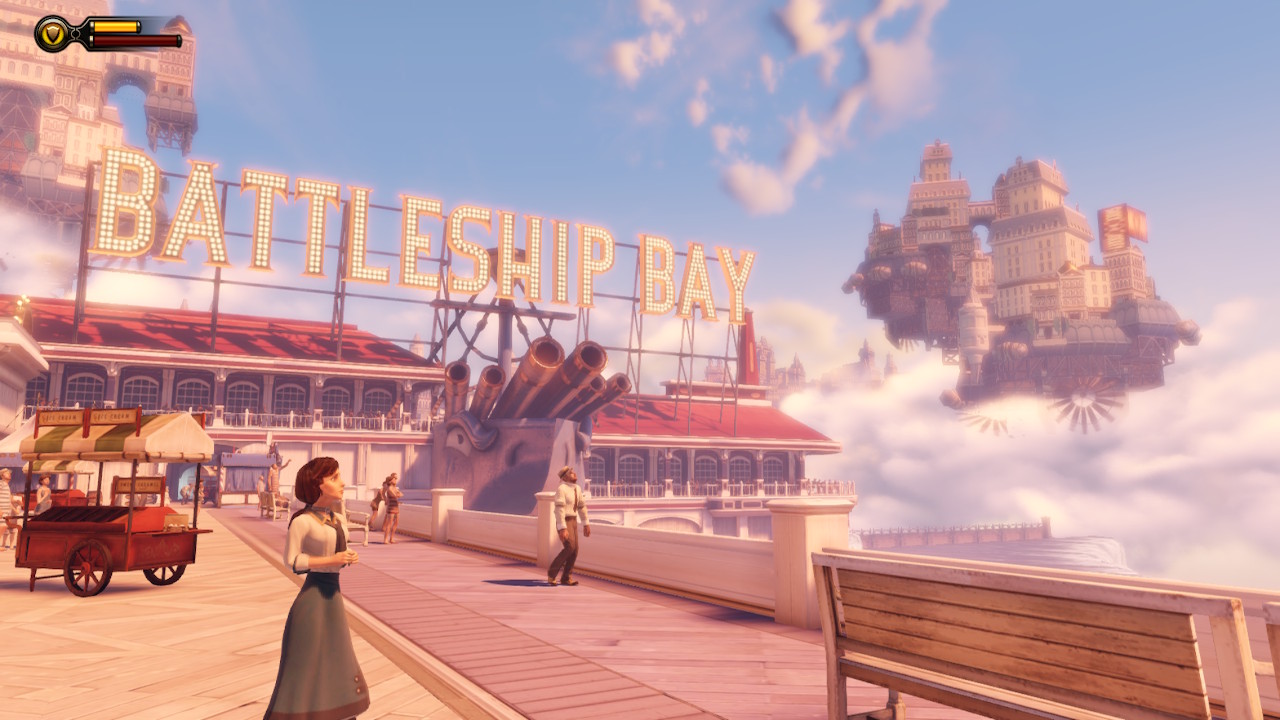 Sure, the PS4 and Xbox One versions of the games run at 60 frames-per-second, but considering the Switch’s limitations Virtuos wisely chose to prioritize visual fidelity and a rock-solid 30 frames-per-second. They probably could have gotten all three up to 60, but that would have required more drastic tweaks and reductions in quality that would have robbed all three games of the ambiance and tone that makes them unique within the industry. Rapture is one of the most iconic settings in video games, and maintaining the moody atmosphere that makes it special is more important than a higher frame-rate.

Instead, all three run pitch-perfect with minimal or hard to notice graphical adjustments. The resolution remains high throughout play, critical world-enhancing details and textures are as sharp as ever, and the lighting hasn’t been murdered in its sleep. In many ways, BioShock: The Collection for the Nintendo Switch reminds me of the excellent Alien: Isolation port from last year. Just like that title, all three BioShock games look and run well enough to be confused with other console editions. Their age certainly helps reduce the processing load required, and the timeless art design means all three still look somewhat modern, but even with these points considered I expected to see more dramatic adjustments.

If there is one gripe I do have it’s with audio quality: in handheld it’s clearly running at a lower bit-rate, and you can hear the frazzle of compression at the edges of every sound. In docked this isn’t noticeable (though the audio is arguably at a lower bit-rate to begin with, considering their age and all), but with a pair of headphones in you will hear the compression. This is especially evident in the Director’s Commentary within BioShock – on my TV it sounded fine, but in handheld Geoff Keighley sounded like a robot. It’s not a deal-breaker, but it’s something to consider before jumping in. If you didn’t like Virtuos’s handling of audio in Dark Souls for the Switch, then handheld audio in BioShock: The Collection will annoy you.

Additionally, there are some legacy issues from the original release that are still present here in the Switch edition of BioShock: The Collection. The audio mixing in BioShock has been equally leveled, meaning audio logs are hard to hear. You can alter the sound settings to create a more pleasant mix, but it’s annoying nonetheless. BioShock Infinite benefits from additional control schemes to choose from (you should play it with the Marksman control preset: it’s infinitely better than the original setting), but the text is tiny and hard to read in handheld, with no way to rescale the HUD. 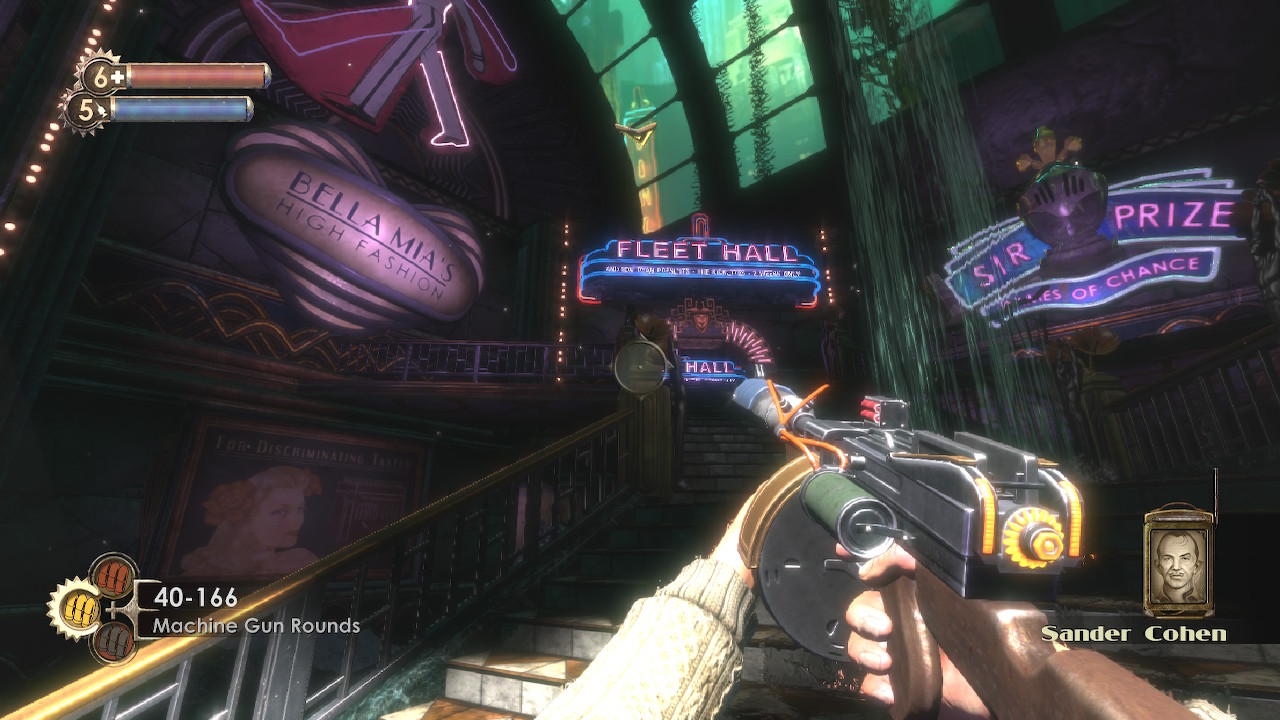 Furthermore, gyro-aiming is absent, which is a little strange knowing Virtuos created a custom system for the Borderlands ports. Also, be ready to clear up space on an SD card, because the boxed edition of BioShock: The Collection doesn’t contain all the data needed to play the games. You’ll get the opening chapters for each and that’s it, meaning you’ll need 31 gigs of free space to download all three. It’s annoying for sure, but it’s a worthy compromise considering we are getting three visually stunning ports of each title.

These are little grumbles at the end of the day. At $50 for the entire collection (or $20 individually), these are fantastic ports of already stellar games (BioShock 2 is a great game, damn it), with all of their DLC included. They sing in both docked and handheld, so returning fans who like to replay the games should certainly consider picking The Collection up. If you are new to the BioShock series then you can’t go wrong with the Nintendo Switch version of The Collection. You’re only missing out on the higher frame-rate really – you could push the graphics further on PC, and Infinite on the Switch certainly doesn’t match the PS4 or Xbox One versions visually, but what’s here is so well done you’ll likely not care. The trade-off? You get BioShock on the go, and you won’t want to tear your eyes out while playing it in handheld (though your ears may disagree a bit).

Otherwise, our review from 2016 still stands. “While there’s not much in terms of new content here, Bioshock: The Collection is a must-own for fans of the series, and a must-play for those that have yet to do so.” In the four years since William wrote those words nothing has changed. The Switch port is as deserving of praise as the original release of BioShock: The Collection. You’ll have to put up with some of the remasters’ less desirable changes, and the audio could be better, but BioShock: The Collection for the Nintendo Switch remains a trio of fantastic ports. Would you kindly give them a gander?

Home / Original Articles / BioShock: The Collection for Nintendo Switch is a Trio of Fantastic Ports