Imagination fueled MMO with a novel take on player ownership. 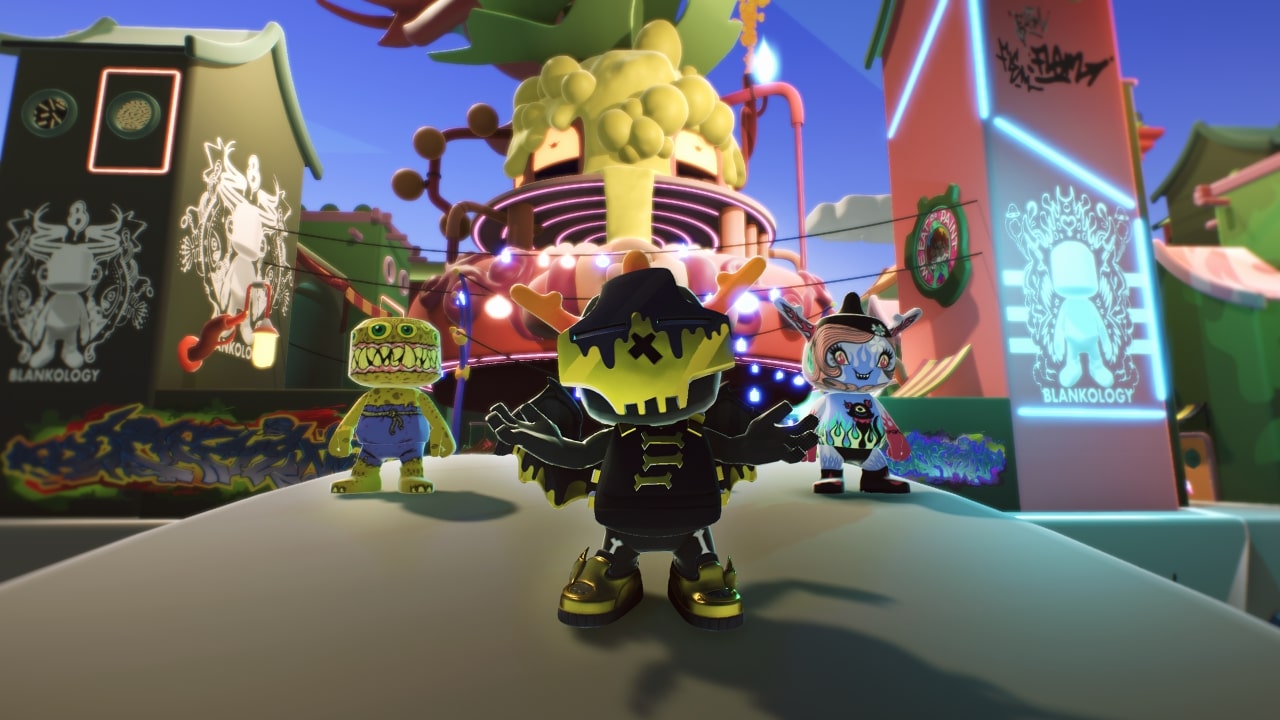 Blankos Block Party is a collection of well-established ideas held together by one powerful linchpin: genuine player ownership over their virtual goods. Early last week myself and other members of the press sat down with developer Mythical to discuss and preview the party MMO, and I gotta say I was largely impressed. Blankos has the creative spirit of Little Big Planet, the confident style and soul of Splatoon, and a player-ran economy that places the power firmly in our camp.

For starters, Blankos Block Party is a lobby-based MMO set in a universe where vinyl toys called – you guessed it – Blankos go to play when no one is looking. Think of your Pop! Vinyls disappearing in the night to play in a pocket dimension, and you’ve got the general gist. In this lobby, known as the Junction, players will meet up to play mini-games, socialize, and platform about between excursions into player created levels.

The gameplay crux of Blankos Block Party rotates around mostly unfettered creativity. Much like Little Big Planet, the game comes with a full suite of creation tools that enable players to sculpt whatever levels they can think of. We were shown one that was a frenzied race that tested players’ platforming skills, and another set in small arena where everyone took aim at each other with a colorful collection of weapons (like a burst rifle that had a cactus for a barrel).

It was in this arena we were given a full preview of the tools available to players, which were extensive to say the least. There are the usual suspects, such as various blocks of geometry, but also a full host of “toys” to play around with – interactable objects with fully customizable parameters to add some extra flair to player levels. From cannons that launch players skyward, to speed boosting auras, there’s a wide range of toys available for players who like to craft madcap gauntlets for their friends and foes alike.

The creation tools appear rather robust, and those who like to build without restraint will find much to love about Blankos Block Party in this aspect alone. Building looks to be fairly streamlined in execution as well; you can float around as your Blanko placing objects, setting triggers, and generally fine tuning your level, and with the press of a button you can fire the whole thing up to give it an on the spot evaluation. 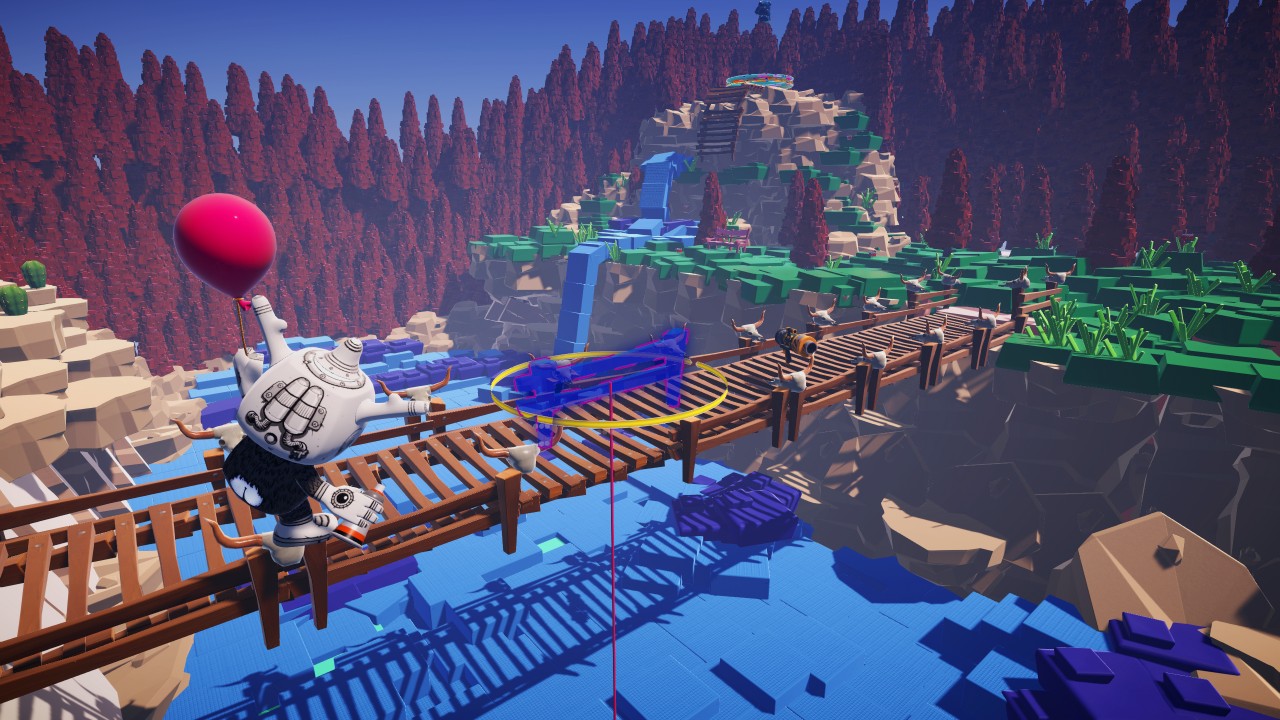 Outside of building levels players can jump into the “Party Bus” with friends to sample each other’s creations. Levels can be filtered by type, rank, and overall quality, meaning the best of the bunch will slowly rise to the top. Much of the DNA found in other player-creation titles can be found in Blankos, and the varied toolkit should provide a healthy slew of options once the game is in the hands of more imaginative players.

Of course, there’s more to Blankos than building: each Blanko has a handful of stats and talents that can be unlocked that alter how they play. One of your Blankos can be tailor built for platforming challenges, while another is a crack shot. Throw in items like wings that let you take to the sky, and levels can become all sorts of crazy. Thankfully, creators can set limits to what can and can’t be used within their creations if they prefer to keep the playing field level, but within the Junction it’s a free-for-all.

The Junction is the social hub within Blankos Block Party. When players are not busy toiling away at their projects they’ll come here to chat, mingle, and bounce about collecting Vibes – purple lightning bolts that fuel Blanko skills. It’s a mix between Splatoon’s colorful and stylish Inkopolis hub, and the wilder platforming levels where the design went absolutely nuts – just with a greater abundance of food-inspired architecture. Giant grilled cheese sandwiches swing above you off in the distance as you enter a giant ice cream cone. The art, animations, and tone of Blankos are as equally stylish as they are charming: it’s a game bursting at the seams with swagger and confidence.

Even before discussing Blankos unique approach to player trading, the hands-off demo made it clear the game is shaping up to be an enjoyable mix between slick platforming and full-bodied creation, all for the low price of free. Fans of both Media Molecule’s library and Nintendo’s squid kids will find plenty to like here, and I frankly can’t wait to kick the tires when the game enters beta later this year. Yet, Blankos has a bit of an ace in its hand; something that could prove disruptive to gaming as a whole if it takes root. 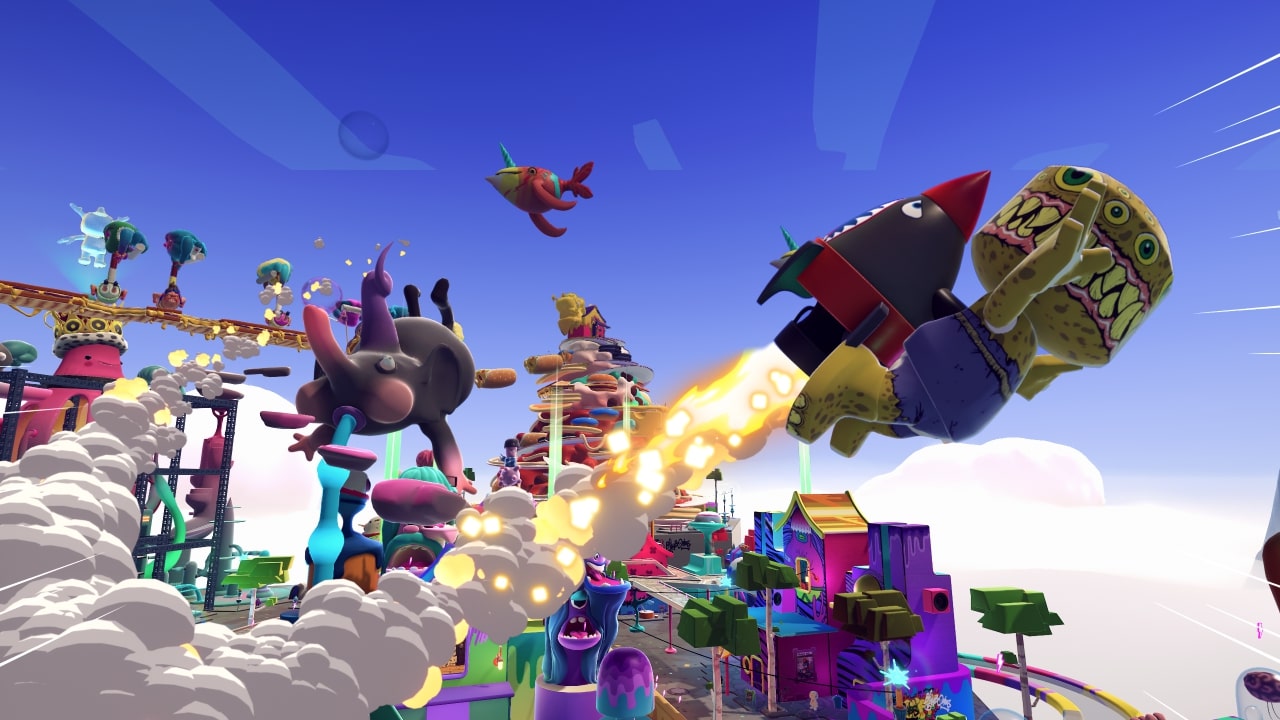 In Blankos you own your items, not a license.

Most of you reading this article are likely familiar with “gray markets” –  places where players can buy and sell their digital goods for real money. These are always risky ventures, since we don’t actually own any of these virtual items. Everything is wrapped up and sold under a license these days, and getting caught could lead to a full ban in whatever game you’re hawking wares from. That’s without mentioning the shaddier sites as apt to steal your credit information as they are to sell you dubiously obtained skins.

Blankos aims to legitimize gray markets, providing a safe place for players to buy and trade digital items that are treated akin to physical goods as they bounce about from owner to owner. Blockchain technology is baked into Blankos engine at a fundamental level, which – for those of you not savvy with the term – provides a means for every virtual doodad to possess a genuine, tangible connection to the person that owns it.

See, most virtual items – like skins – are generated infinitely until they’re no longer obtainable. If you and I both earn the John Wick skin in Fortnite there’s no fundamental difference between the two, and if I wanna pawn mine off to some kid that missed that season I’ll have to hand over my full account.

In Blankos, the blockchain tech driving the economy is very much the same as that powering crypto-currency. Grumble as you will, but virtual currency works because we’re able to prevent it from inflating and spawning ad infinitum thanks to this technology. Each coin has a clear origin, is data-stamped and registered to trace movement, and there is a hard limit to how many are available.

Blankos is utilizing blockchain largely to the same effect: every player owned item will be stamped with a number and place of origin, and can be freely traded within the safety of the game’s legitimate market. The item that’ll drive most of Blankos economy will be the titular Blankos themselves, virtual vinyl toys designed by renowned artists the world over that can either be earned in-game (via the Battle Pass, because, yes, Blankos will be a seasonal game), or bought with cash. 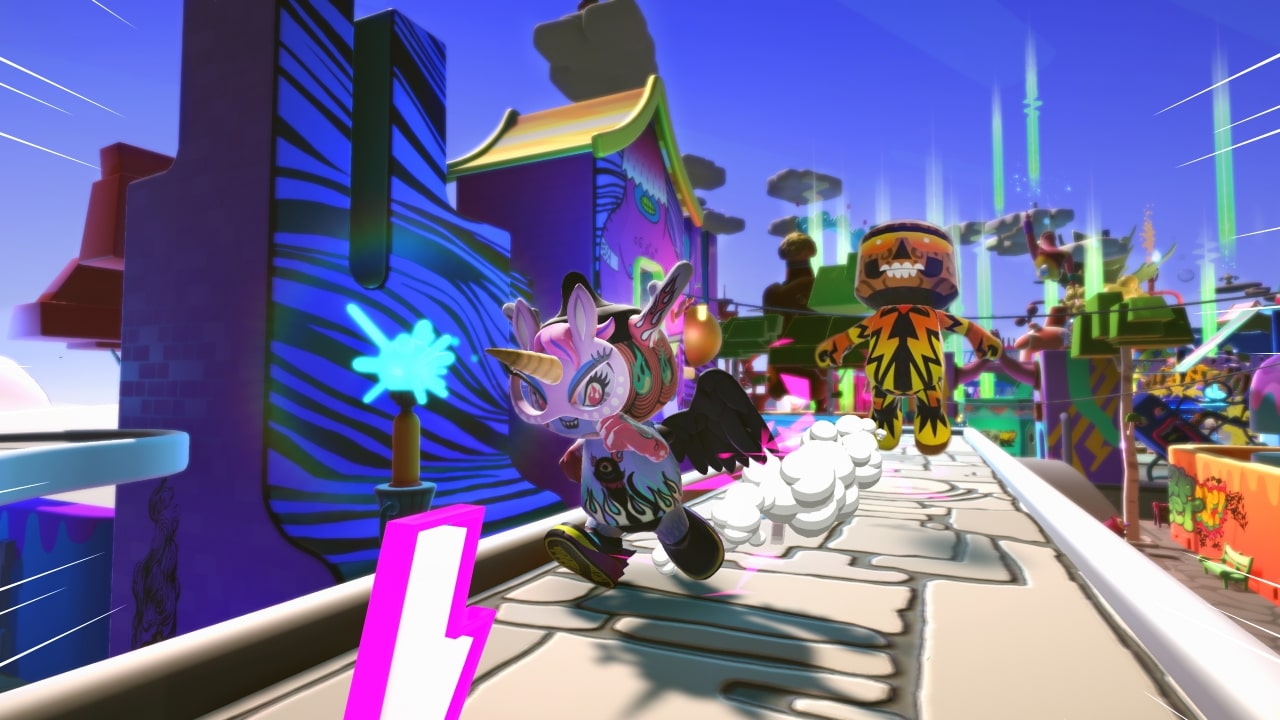 Say you come into possession of a rare Blanko: it’ll have a production number much like a physical vinyl (“you’ve got #328 of Tara McPherson’s Space Girl, out of 900”). A few months later you see it in your shelf (where all your Blanko are stored, in their boxes or outside them), and decide to see if there’s any demand for Space Girl. Sure as shit, there is. You go on the market, put it up for sale, and a quick transaction later some dude in Kentucky is now the proud owner of Space Girl #328.

Mythical assured us this system will be used for all player owned goods, and they even hinted at players being able to design Blankos in some capacity in the future (currently all Blankos will be created by professional artists and designers, much like Pop! Vinyls). For those out there that like to customize their avatar fret not: there will be plenty of items to equip on your Blanko of choice if you want to stand out.

All and all Blankos Block Party is shaping up to be an entertaining blend of platforming, shooting, and creation surrounded by genuine player ownership. The game itself looks like a blast (especially if you’re the creative type), but the blockchain-based economy stands to really shake things up. If Blankos can prove the tech works we could possibly see a future where you no longer pay to license your digital library. Imagine: buying and trading your used digital games, and making some money back from your bloated Steam collection (I’m shaming myself with that statement too).

Mythical has all the ingredients in place, so now we just have to wait and see how they all come together. The game should enter beta later this year, with an Early Access period planned for some time next year. Keep an eye on Blankos: even if the gameplay isn’t to your taste, the fresh approach to player ownership is poised to disrupt the industry as we know it.