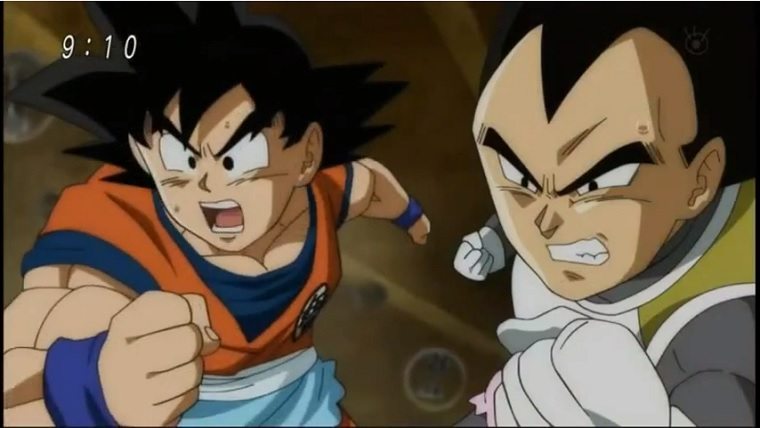 Another week has gone by and Dragon Ball Super episode 18 has now aired. This is our review as we will go into detail on what happens and give our thoughts on it.

Dragon Ball Super episode 18 is kind of the last filler episode until the Resurrection F saga truly begins. However, we do see inklings of the saga starting and there is one scene that is recreated here in this episode that was from the movie.

If you remember from last week, Goku traveled on Whis’ back to train on Beerus’ planet. After hearing that Vegeta has been training there for six months already, Goku got jealous and needed to join in. In this episode, we see the two on Beerus’s planet for the first time.

The first half of this episode was pure comedy even from the get-go. As we left off from last week, Goku is traveling with Whis to Beerus’ planet. Goku needs to go to the bathroom really bad but has to hold it in. Unlike Instant Transmission, Whis cannot travel long distances in one second.

The majority of this episode centered around Goku and Vegeta working on Beerus’ planet and not actually training. There was a big scene that the pair of them needed to change Beerus’ bed sheets. However, they needed to find a way to move Beerus without waking him up.

These antics kind of show the characters of both Vegeta and Goku. Vegeta doesn’t mind to do chores and actually works and he’s also more responsible. This episode highlighted Goku’s more childish behavior as he was a bit dumb and nearly woke up Beerus multiple times. It was also funny to see that Beerus can knock Goku and Vegeta in his sleep when he’s just moving around in bed. 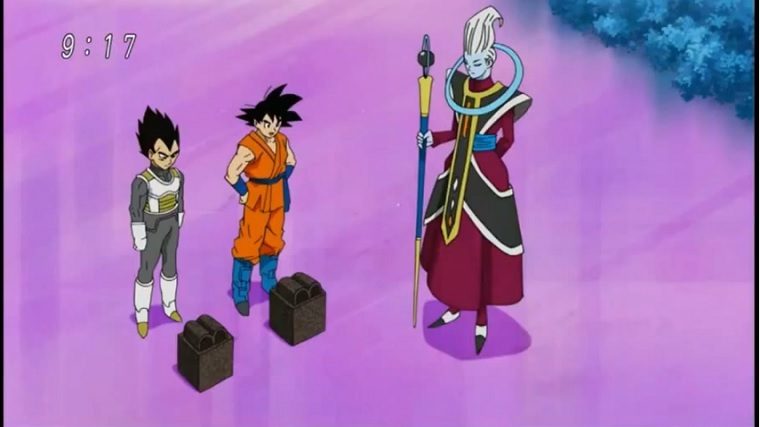 After the chores were done, Whis finally was able to train the two warriors. Goku and Vegeta couldn’t even lift the stones off the ground. These stones must have been really heavy as we have seen these characters train in gravity hundreds of times heavier than on Earth before. However, they were able to lift them off the ground eventually. Their training ended when Whis transported them back to Beerus’ bedroom and he managed to knock them out by shouting a blast to them.

The next day, their training was the same scene from Resurrection F. This is where they try and land a punch on Whis and he tells them about their flaws. Vegeta is too tense and needs to learn to relax. On the other hand, Goku is too relaxed and can get caught off guard easily. We also know in this episode that Vegeta can detect God Ki now. This is a sign that he’s surpassed Goku somewhat as Goku cannot do that yet.

The Resurrection F links continue as we see Sorbet and his gang in their ship. A huge blasts comes their way that makes their ship go off course. We know that they will be eventually coming to Earth to try and revive Frieza. However, the exciting part of the entire episode as our first look of Champa and Vados. The blast came from Champa and it looks like he’s blasting planets. Sadly, their appearance was very brief.

Another thing I noticed about this episode is that the bad animation is back. You can see from the screenshot provided in this review. Vegeta and Goku look a bit off in this scene. Other scenes similar to this occurred throughout the episode as well. It’s possible the better animators are working on the fight scenes to happen in future episodes.

Overall, this episode of Dragon Ball Super was okay. It was great to see Champa and Vados for the first time. It was also funny seeing Goku and Vegeta together too. Some might say this episode dragged on a bit, but it wasn’t too boring. Next week will see Sorbet and the gang on Earth.