Dragon Ball Super episode 27 has ended and we see the start of the Vegeta vs Frieza fight. This episode also marks the end of the Resurrection F saga as a whole new chapter in the TV series starts next week.

As we saw last week, Vegeta came to the aid of Goku and is now going to fight Frieza. Much like in the movie, Frieza tries to kill Krillin when he wants to give Goku a senzu bean. However, Vegeta deflects the blast which kills Sorbet instead. Sorbet’s death was actually a lot more violent in Dragon Ball Super though…

The TV series also foregoes Frieza’s attempts to convince Vegeta to go to the dark side so to speak. These two just hate each other in the TV series which makes more sense when you think about it. Frieza is the reason why most of the Saiyans are dead.

One interesting note is that Goku kind of explains how Vegeta became a Super Saiyan God/Blue. Unlike Goku, Vegeta didn’t need power from all of the other Saiyans to become a God. He did it through his own will power alone which is very impressive. Vegeta was training with Whis longer than Goku as he was on Beerus’ planet a few months before Goku arrived. At least it gave us an explanation to how Vegeta became stronger. 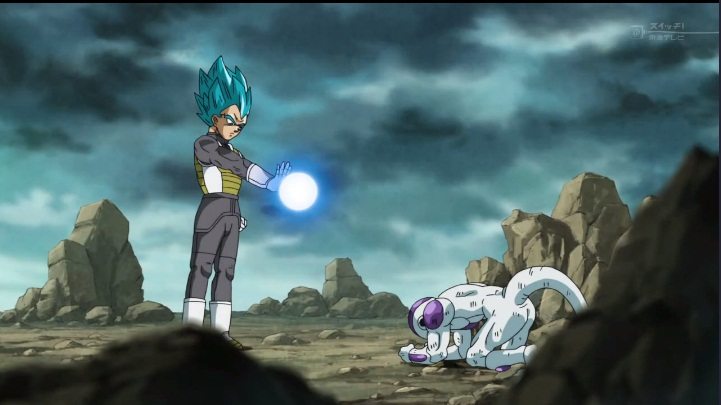 The action sequence where Vegeta kicks the living heck out of Frieza is excellent. It feels more heavy and personal than how it was portrayed in Resurrection F. I loved the scene, although much like in the movie it ends so abruptly. It would have been nice if their fight lasted a little longer than one episode. They kind of rushed through the Resurrection F saga very quickly.

Anyway after getting his butt kicked, Frieza decides to explode planet Earth. One small change is that they show all of the other characters from the Dragon Ball universe before everything blows up. It feels a lot more personal and sad when you see the last seconds of the likes of Android 18, Buu, Pan and the others before the Earth explodes.

Thankfully, Whis protected the other characters and can reverse time. This means Goku has a second chance to kill Frieza right before he blows up planet Earth. Goku then becomes Super Saiyan Blue and kills off Frieza once and for all with the Kamehameha wave.

The end of this Dragon Ball Super episode is great, but it did feel a bit rushed. They didn’t bother to show us Piccolo getting revived with the Namekian Dragon Balls. He was revived offscreen. However, I do like how they hold a great party at the end.

Next week starts the Champa saga. This is awesome because this is the new material we have been waiting for since the TV series debuted back in July. Keep it locked at AttackoftheFanboy as we will review the Champa saga in full in the weeks to come!