Dragon Ball Super episode 33 marks the official start of the multiverse tournament as the first match on the card is Goku vs Botamo.

Before I talk about the fight itself, let’s discuss the format of the tournament. The tournament is a “winner stays on” kind of format. The winning team is the one with the sole survivor so it’s similar to say the Team Battle mode seen in the Tekken games or even WWE’s Survivor Series.

There is no killing allowed in the tournament so fighters only lose if they are knocked out, give up or land outside of the ring. No outside interference is allowed and fusions are banned. However, individual transformations are allowed.

Anyway, Botamo makes life a little hard on Goku by using his weight to his advantage. Since he’s so fat, he basically belly flops during the match and this nearly rocks Goku out of the ring. Thankfully, Goku has speed and agility on his side and is able to dodge them. It’s worth mentioning Goku is fighting in his base form at the start of this episode.

Goku does a few stretches and while he’s doing that, Botamo changes his tactics. Now he’s using his mouth to shoot out laser blasts at Goku. Goku manages to dodge them and goes behind Botamo to shoot a kamehameha wave. Botamo manages to eat the blast which is similar to how Yakkon from Dragon Ball Z devoured light energy. 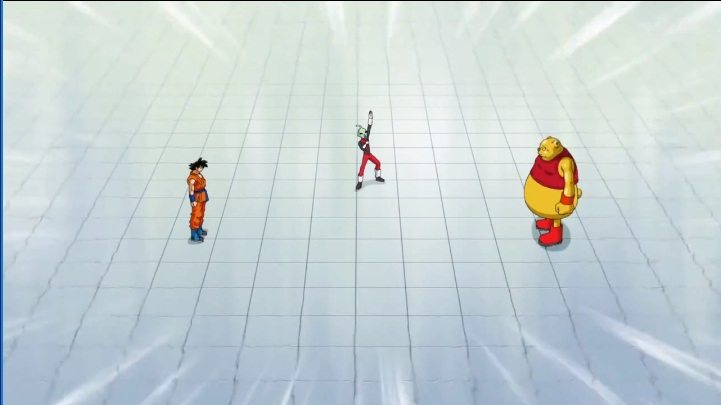 Goku then punches Botamo’s big belly, but this has no effect whatsoever. Even after Goku keeps attacking him physically, his attacks don’t seem to harm Botamo at all. This goes on for a while and Goku is stunned that his punches are doing nothing.

Vegeta tells Goku he should headbutt him, but this doesn’t work either. Jaco gives a small explanation that Botamo transfers attacks to another dimension or something like that. Goku then does something quite easy and that’s just picking Botamo’s legs and then throwing him out of the ring. Goku is the first winner for Universe 6.

Next up, Goku now has to face the next person from Universe 6 and that is Frost. Frost is of course the character that looks a lot like Frieza, although he’s not as evil. Krillin also says that he wished Frost lived in Universe 7 instead of Frieza. Even with a new opponent, Goku is still in his base form at this point in the episode.

Goku knows that Frost can transform and he does. Frost turns into the ugly conehead form that Frieza was in his third transformation. After the transformation, the two keep fighting all over the arena. The two seem to be very evenly matched and it’s very fun to watch. It’s been awhile since Dragon Ball Super featured an episode with extended fight scenes so this is great to see.

Goku tries the kamehameha again, but Frost goes through it like nothing and spear tackles him like Roman Reigns or any other WWE Superstar that uses the move. This was great as it shows how powerful these characters really are. Goku isn’t the perfect Superman/John Cena type character that he was in previous Dragon Ball episodes. 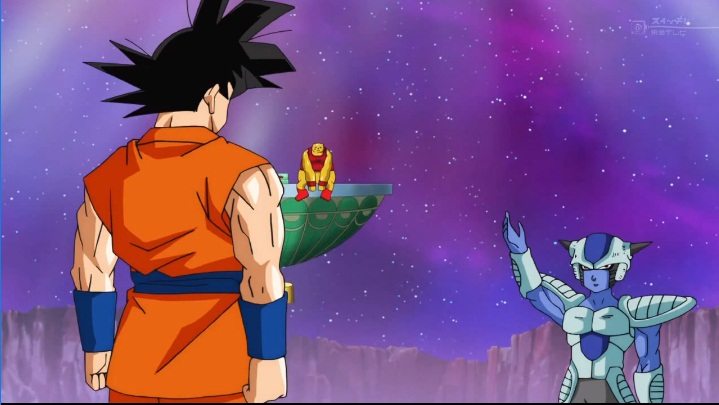 An interesting part about this Dragon Ball Super episode as that we get a flashback from Universe 6 showcasing how Frost is a hero to lots of people. Again, this shows how different he is to Frieza who killed lots of people in Universe 7.

After the two fight for a while longer, Goku then decides to turn into a Super Saiyan. He’s only the golden Super Saiyan 1 form so he’s still not using his full power for some reason. It’s interesting to note that Cabba from Universe 6 has not seen this form of a Saiyan before.

Frost then changes into his final form and he looks badass. The two then fight some more and everything looks intense and heavy. If you are tired of seeing the episodes with lots of talking, you’ll love the amount of action provided here as it’s plentiful.

At this point, Goku keeps pounding Frost and looks to have the upper hand. Goku urges Frost to give up instead of continuing. However, Goku has used a lot of his own energy and appears very tired. Frost knows this and kicks Goku out of the ring. Goku loses and Frost is declared the winner! This is how the episode concluded.

I loved this episode as it showed that Goku isn’t perfect after all. I’ve been watching all Dragon Ball episodes from beginning to end, and I was getting sick of Goku getting the “John Cena” treatment. Goku now looks vulnerable and lost in only the second fight of the tournament.

Next week’s episode of Dragon Ball Super looks like an even better episode as it’s Frost vs Piccolo. Make sure to visit us next Sunday as we will be reviewing episode 34.