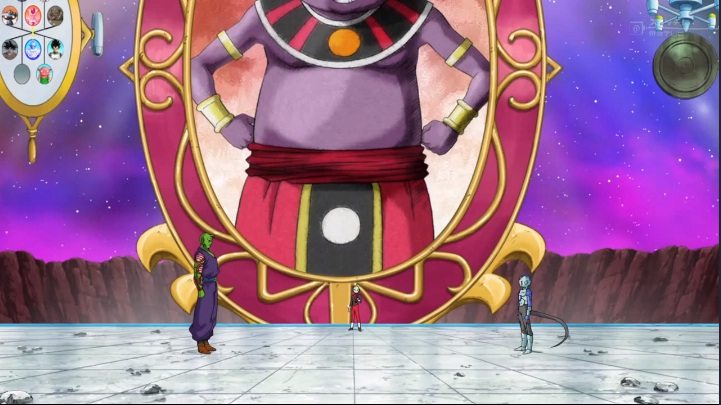 Dragon Ball Super episode 34 aired this week and it is just as action packed as episode 33 was. The multiverse tournament is still underway and the stakes have never been higher.

Episode 34 of Dragon Ball Super starts off where episode 33 left off. As you may know already, Frost kicked Goku out of the ring in the last episode and it wasn’t without controversy. It appeared as if Frost used some type of magic to daze Goku.

Goku is still knocked out while Frost is declared as the official winner. Chi Chi is worried that something bad has happened to Goku and runs over to try and wake him up. Goku wakes up all woozy, while Frost asks him if he’s alright. Frost then raises Goku’s arm and everything seems to be cool between the two fighters as everyone applauds.

Beerus is obviously annoyed as he felt Goku should have beaten Frost easily. After all, Goku was only using Super Saiyan 1 against Frost. If he turned Super Saiyan Blue, Frost would have melted (excuse the pun) easily.

Anyway, the tournament has to resume and Piccolo is the next fighter up from Universe 7. There is a funny moment where Piccolo throws away his heavy weighted clothing at the announcer. The announcer wasn’t too pleased about nearly getting crushed to death… 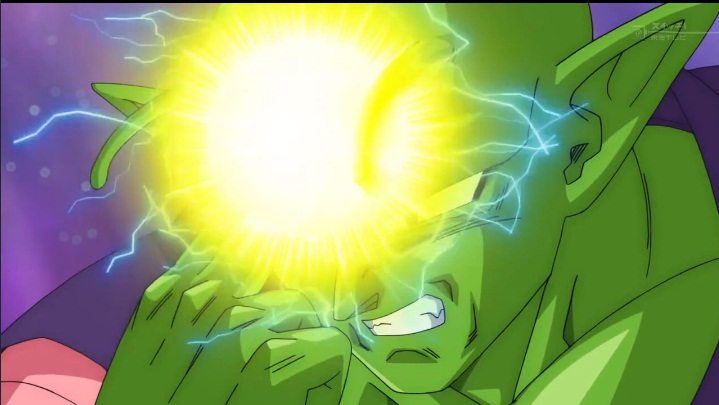 Piccolo asks Goku is he has a chance to beat Frost. Sadly, Goku is honest with Piccolo and tells him he has no chance. However, Goku is confident enough that Piccolo might be able to soften up Frost before Vegeta steps up to the plate.

Unlike Goku, Piccolo doesn’t want to waste time warming up and immediately goes for his special beam cannon. This is his finishing move, so it looks like Piccolo wants to end Frost as soon as possible.

The funny thing is that Frost doesn’t waste time either and starts attacking Piccolo while he’s still charging up. This is the great thing about Dragon Ball Super because it gets straight to the action and doesn’t fill up time with a character powering up for an entire episode. It gets straight to the point quickly which is why a lot of content has been covered over the last few episodes.

Frost manages to blast Piccolo’s knee, however Piccolo still manages to charge up his special beam cannon. Piccolo then uses a technique where he splits into multiple beings of himself. It doesn’t work as Frost manages to blast the illusions and starts punching the real Piccolo again. Piccolo is still charging his move while blocking Frost with only one arm.

The worst thing to happen to Piccolo is when Frost punches him hard in the stomach, and this causes him to stop powering up the special beam cannon. Piccolo is not without his own tricks as he extends his arms like Dhalshim from Street Fighter and wraps around Frost to power the move up again with his other arm. 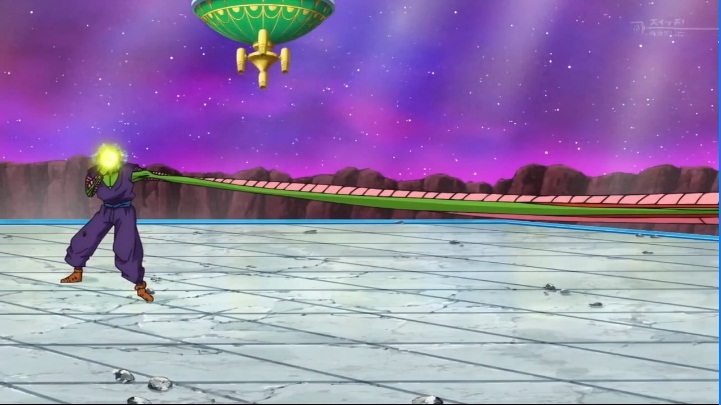 Frost then uses his magical technique again on Piccolo and Piccolo is woozy the same way that Goku was. Frost ki blasts Piccolo in his stomach and knocks him out. Frost is again the winner and has defeated two Universe 7 fighters already.

Jaco notices that Frost might be cheating as he looks like he’s using a needle to make the other fighters dazed and woozy. Vegeta asks the announcer to check out Frost to see if he’s using an illegal object. We find out that he is using a needle that injects poison via his wrist. It wasn’t a magical technique after all.

Because Frost is a cheater, Piccolo wins via disqualification. We then learn that Frost is not the hero type of character that he said he was in the last Dragon Ball Super episode. He’s actually a space pirate and is somewhat evil.

Piccolo is angry with the way Frost has been fighting and Champa is annoyed too since he’s down another man. Vegeta then wants to participate in a bonus match and fight Frost himself. This is the cliffhanger and ends Dragon Ball Super episode 34.

Episode 34 was awesome and it’s great to see how they swerved the audience by labelling Frost as a noble character at the start of the tournament. Now we know he’s a bit evil and cheated in order to win. It’s also great that next week we will see Vegeta vs Frost. Episode 35 should be another good action packed time. Check back with us next week as we review episode 35 next Sunday.