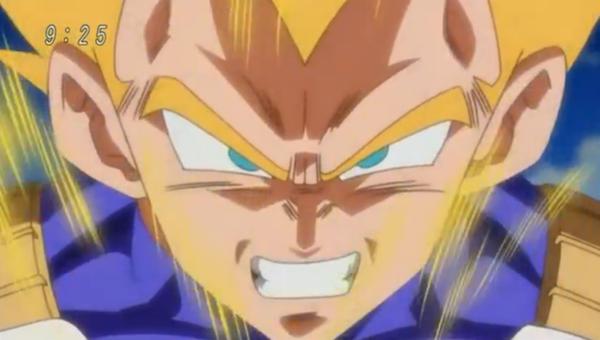 Dragon Ball Super episode 7 was full of exciting action, although it ended in a cliffhanger which is reminiscent of the series.

In the last episode of Dragon Ball Super, Beerus was aggravated when Buu hogged all of the pudding to himself. Beerus challenged Buu to a fight and easily defeated him. Buu ended up swimming with the fishes in the sea.

Everyone looks on and is outraged by Beerus’ actions. However, the fighters are more concerned about Vegeta’s reaction. They see that he’s sweating profusely and is very nervous. They feel Vegeta knows something about Beerus that they don’t.

Vegeta flies up to Beerus to try and soothe things over. His attempt fails as Beerus has been aggravated already and plans to destroy everyone. He has to wait though because Whis is still busy eating lots of nice things from the caterer at Bulma’s party.

The rest of the episode shows Beerus easily defeating the rest of the Z fighters. Gotenks was the first victim as Beerus slapped his arm and flicked him way with ease. The next brave souls were Piccolo, Tien and 18. Beerus held them off without even touching them.

Buu ends up challenging Beerus for a second time, but all of his efforts fail. Even when Gohan tries to intervene, he gets beaten easily too. Nobody seems to be able to lay a finger on the “God of Destruction”. Dende realizes Beerus’ identity and starts to get nervous too.

If you love to mock Krillin and Yamacha, you’ll love this episode. They were the only Z fighters that didn’t dare to challenge Beerus. Nobody can blame them as they are just normal human beings, but it’s funny how weak they are portrayed. They used to be main characters back in the Dragon Ball era… 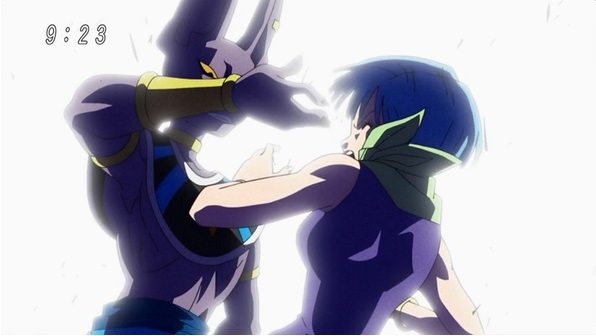 There was a scene that showed all of the Z fighters tired and defeated. Vegeta looks around and knows he has to do something. He starts to go Super Saiyan to finally stop Beerus once and for all. However, Beerus paralyzes him and stands on his head the same way he did to his father several years ago.

When Beerus was just about to kill Vegeta, Bulma confronts him and slaps him in the face. She hates the fact that he ruined her birthday party. Beerus back-slaps Bulma and knocks her out. Vegeta looks on in disgust and then powers up.

While Vegeta is powering up, it appears he’s transforming as he looks stronger than before. The only painful thing is that the episodes ends right there. It left us on a cliffhanger and we have to wait until next week to see Vegeta facing off against Beerus.

The way this episode ended is classic Dragon Ball Z. They love to drag out some scenes as powering up usually takes longer than the episode itself. Dragon Ball Super looks like it’s taking the same approach of teasing fans and enticing them to watch the next episode.

Episode 7 was enjoyable as a whole even though the ending was a big tease. It was the second most action-packed episode so far following episode 5 that had the fight between Beerus and Goku. Speaking of Goku, he did not appear in episode 7. This episode was more about Vegeta.

Speaking of Vegeta, it’s great to see how he really cares about Bulma. He may not show any emotion most of the time, but he will get angry if anybody hurts his family. Although the rest of the episode did make a lot of the other Z fighters look really weak. Aside from Goku and Vegeta, everyone else doesn’t seem to be powerful or relevant anymore which is kind of sad.

Be sure to keep it locked at AttackoftheFanboy as we will be watching and reviewing episode 8 as well. Future episodes will be introducing us to a new character by the name of Champa and more.