The latest news in the world of video games at Attack of the Fanboy
August 31st, 2015 by Kyle Hanson 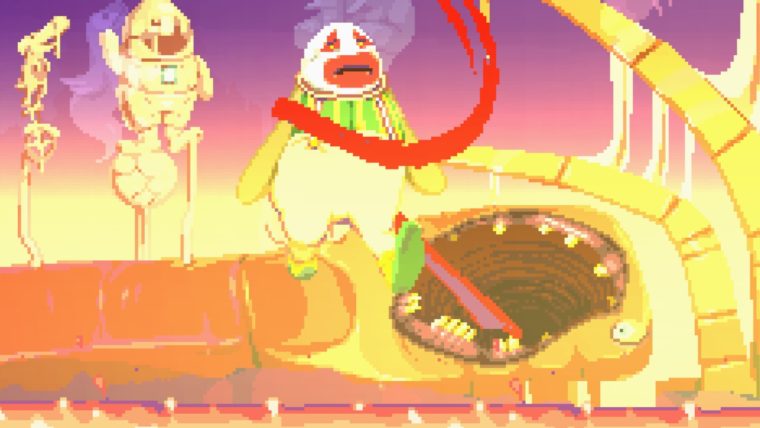 Dropsy is possibly one of the most insane and surreal games that I’ve played in my many long years of gaming. Billed as a point-and-click “hugventure”, Dropsy puts you in control of a clown on a quest to hug everyone he sees. There’s some other bits of story and whatnot surrounding this, but for the life of me, I’m not quite sure what it is just yet as it’s an open world game so you’ll be piecing it together as you go.

Starting off in proper fashion, Dropsy begins things with a horrifying nightmare that involves a long ago carnival fire. You then awake as the titular clown and embark on your adventure. The world of Dropsy is shaped by its art, a fascinating 8-bit style that feels both classic, and off-putting at the same time. It’s this same feeling that seems to permeate the rest of the game.

Everything in the world of Dropsy is a bit off, somehow. Whether its the red coloring around your dog’s mouth, or the way your character bounces and bops around the world. The developer, Jay Tholen, who developed this game primarily on his own, apparently doesn’t like clowns very much. This was explained to us by the publisher, Devolver Digital, but it’s also apparent in the game, with Dropsy joining the ranks of Pennywise among clowns that can induce nightmares simply by looking at them. However, he doesn’t seem to be malevolent in any way, just somewhat misunderstood. 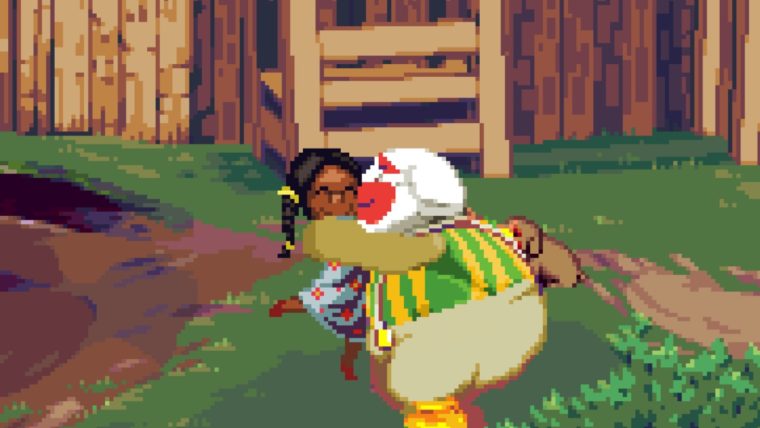 In terms of the gameplay, Dropsy is a classic point-and-click adventure with some interesting twists on top. You have a few basic actions, such as moving and hugging, which are all controlled by the mouse. You also have an inventory of items that you can discover throughout the world. This isn’t a toned down graphic adventure like we’ve seen with Telltale’s The Walking Dead.

You’ll use these items to solve various puzzles. When you come upon a character you’ll get some hints as to what they might want from you, or what you need to do. These come via images displayed in speech bubbles, in fact, the entire game is text-free, with literally everything being conveyed via images. For those seeking a more hardcore point-and-click experience this will be fantastic, as it presents a great challenge to try to figure out what these characters want. However, novices might find themselves confused as to what to do, or where to go.

The menus follow this same aesthetic, with it taking a while to get used to things. You’ll literally need to click around at random to figure out what each icon represents. Simply saving and exiting the game might take a minute your first time booting up Dropsy. Once this is all accomplished it’s a bit more smooth sailing though. Those that put in the effort will have a certainly unique adventure waiting for them as the world of Dropsy is simply like no other.