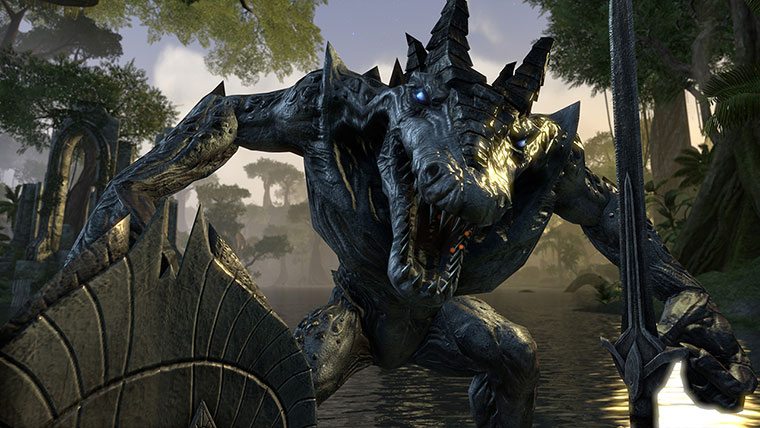 The Elder Scrolls Online has lifted its beta NDA, and written impressions, videos and screenshots are pouring in all over the internet. With two months to go before the MMO’s official release, ESO has seen its fair share of controversy. Imperial Editions, subscription fees, an exclusive race, and speedy white horses have fueled many of these arguments and added ammunition to both sides of the battle, but it’s my job, here at Attack of the Fanboy, to share my impressions of the game’s beta events.

The Elder Scrolls Online is very much worthy of its namesake.

Last weekend over half a million beta invites were sent out and Tamriel boasted the largest number of players its had up to this point. The server was packed with PVPers, crafters and questers alike, and I was there to take it all in. Here are my impressions of the ambitious MMO thus far.

As an MMO and Elder Scrolls fan, I’ve tried to approach this examination with a good measure of objectivity and separate one from the other. As an MMO, Elder Scrolls Online brings some new things to the table as well as features that are extracted from other hit MMO games, such as exhilarating Dark Age of Camelot large scale PVP battles and instanced dungeon crawls. My biggest fear going into the game was that it wouldn’t quite capture the essence of what makes so many Elder Scrolls games great: the freedom of exploration and the freedom to create the kind of character you wish to play without the hassle of the usual race and class combinations and restrictions you might find in other RPGs. In, say, Skyrim you could completely ignore the critical path and hunt deer all day or collect insects and plants to become Tamriel’s most accomplished alchemist (other than Sinderion of course). Or you could lose an entire play session smelting ore and shaping steel into the game’s most powerful weapons and armor. The possibilities are truly endless in The Elder Scrolls. But in an MMO, the rules are a bit different. The social nature of such games and the fact that they must be designed to accommodate thousands of players rather than just one means that the experience has to be structured for guided progression and have a lot more structure than a single-player affair.

So it’s with great relief that after three beta weekends and a couple characters near the beta level cap of 17, I can report that The Elder Scrolls Online is very much worthy of its namesake. ESO feels like an Elder Scrolls game should. I was absolutely free to follow my instincts as an Elder Scrolls veteran. I opened random doors and rifled through NPC bookshelves, dressers and chests and found many a lorebook or skillbook, new and familiar alike. I gained crafting skills (more on that later), crafting ingredients and more background on the game’s story and lore. I quested and killed monsters. I found random chests sprinkled throughout the world and tried my hand at lockpicking. I mined ore, I picked plants, I was eaten by slaughterfish. Cliffracers, I didn’t have the (dis)pleasure of seeing. ESO captures that good ol’ Elder Scrolls feel, but we’ll have to see if that feeling sustains itself over the course of the leveling climb from 1 to 50, as I was only able to experience the game up to level 15. 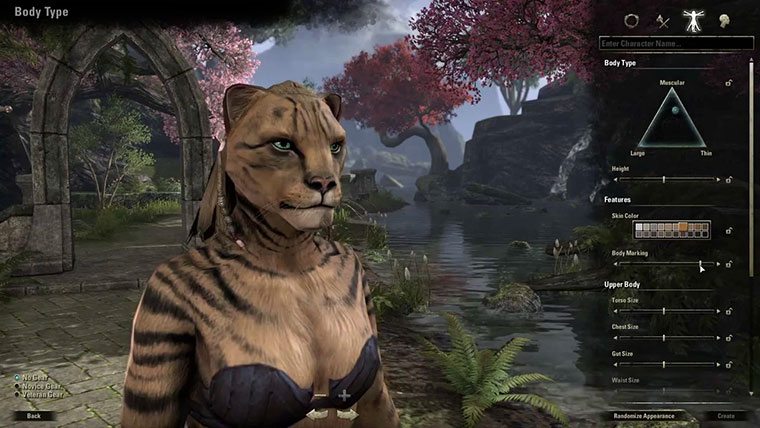 The character creation tools are robust and a lot of fun. You’ll be able to make the character of your choice, picking a race and starting class (which you’re free to customize how you see fit as you play) and filling out little details like hair style and body proportions. If you’re anything like me, you’ll probably spend about an hour making your first character. Such is the depth of ESO’s character creator.

Leveling up in ESO is a blast and ridiculously addictive.

If the idea of classes scare you, fear not. You will choose from a handful of starting classes like Nightblade, Sorcerer and Dragonknight, but you are not restricted to that class’s abilities like you would be in other games. For instance, I created a Altmer (High Elf for the uninitiated) Sorcerer and proceeded to trick him out with heavy plate armor and an imposing two-handed sword. He carved his way through enemies with dark and lightning magic, destruction magic and a summoned daedra at his side for extra protection. It’s an amazingly deep and fun skill system, and the amount of skill lines and abilities available to further customize your character is downright staggering to the point of being almost overwhelming.

Leveling up in ESO is a blast and ridiculously addictive. It’s by far my favorite part of the game. You may, for instance, decide to pursue the Dark Magic skill line with a sorcerer and start out with a direct damage spell that you can hit enemies with from a distance. After leveling this skill up by simply using it often (just like in other ES games) you’ll get the option to “morph” it. Next time you get a skill point (via leveling up or finding 3 hidden skyshards) you’re free to put a point into that skill and you’ll have a choice of changing it into one of two new iterations of the spell. For instance, you may be able to turn it into a direct damage spell that now sucks a bit of hit points and transfers it to you, or you may be able to do some damage and have the spell put a temporary damage shield up to protect you from incoming damage. And that’s just the tip of the iceberg. There are literally hundreds of different paths you can take, and I can’t see any two classes turning out the same. It’s exciting to stand out from the crowd and the skill system allows you to do just that.

My tank mage met with good success in the field, pulling creatures with the benefit of direct damage spells and then unsheathing his two-hander once they closed the gap. And once you hit level 15, you get the nifty ability to weapon swap, adding yet another level of customization and depth to your character. In other words, my character was able to cast spells, use a two-hander and once he hit 15, wield a brand new hotbar full of skills for the destruction staff skill line. I can only imagine how unbelievably deep characters must get once they’re near or at the level cap of 50. 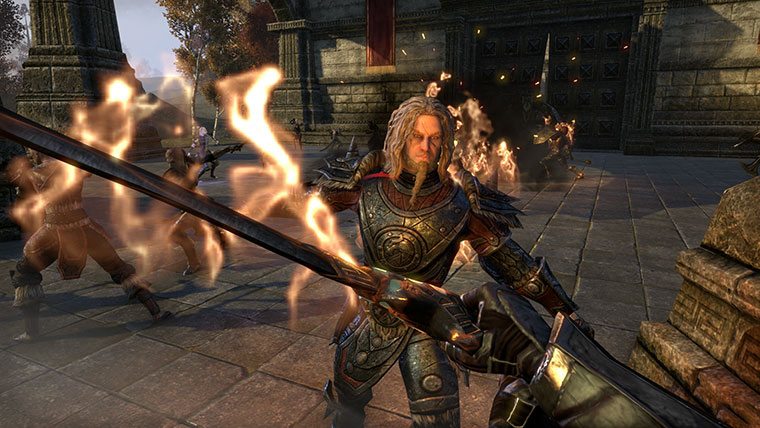 The game’s second largest pull. If you’re familiar with Dark Age of Camelot, you’ll be right at home in Elder Scrolls Online. Each of the three factions owns a small piece of the map and vies for control of the emperor’s chair in Cyrodil. You try to capture castles, keeps and the legendary Elder Scrolls themselves. Each army has siege weaponry like ballistae, catapults and battering rams at their disposal. There’s also pots of boiling oil to pour onto attackers and different magical types of weapons to aid in your attack or defense. I partook in many battles where there were well over 100 people on screen at once, and let me tell you, it’s exciting stuff. Some people are up in arms that there isn’t collision detection — meaning you can and will run right through allies and enemies, but that didn’t do much to diminish the frenetic, strategic experience of battle in my opinion.

You can earn experience and level up in Cyrodil, partaking in PVP quests like killing 20 enemy players and taking certain keeps and castles. There are also other things to do in the PVP province like gather materials, find skyshards (find 3 of these and you get an extra skill point to spend) and grind mobs. The only downside I found here, was the absolute necessity of having a horse. Walking, especially if you’re trying to get into PVP quickly, can get tedious, but there is something special about running through a green rolling field with fifty or more buddies by your side. I felt like I was in the middle of a scene from Braveheart.

It should be noted that combat feels better than some and worse than other Elder Scrolls games.  I personally find the combat fun and strategic and full of tactical options, but I’ll admit that feeling doesn’t open up until around level 6 or so. Maybe a level or two higher. Once you get there, though, it’s a lot of fun.

The crafting systems in ESO are just as deep as the character customization and the PVP, if not more so. You can choose to pursue Cloth working, wood working, alchemy and blacksmithing among others. I messed around with the blacksmithing skill and was astounded by how robust it was, allowing for even more customization with which to stand out from the crowd. For example, you can gather common iron ore and refine it into ingots to create weapons and armor. You can then use special knowledge and items found in the world to make those items in any racial style you have unlocked. Fancy making a wicked Daedric helmet? Get the necessary ore, crafting knowledge (found hidden in books spread around the world) and items needed and you’ve got yourself a sword that perhaps no one else will have access to. I even saw racial styles that may or may not be familiar to Elder Scrolls fans like Ancient Elf.

It doesn’t end there, however. You can make your own food, potions, clothes and bows. On my journeys, I found a mountaintop with a crafting station that gave me access to a special set of armor and weapons that could only be created at that particular spot. Great stuff.

It’s incredibly rewarding to find materials and craft your own gear, and I can see it propelling many many hours of gameplay in its own right.

I approached Elder Scrolls Online with the same amount of ambivalence many others did, but I came away from my three weekends with the electric anticipation buzzing through me like I experienced with any imminent Elder Scrolls title since Morrowind. It feels like Elder Scrolls. It plays like Elder Scrolls. I only hope that it sustains that magic feeling to the end game and beyond. The game allows you to pursue the world in any way you see fit and should be immediately comfortable to Skyrim veterans especially, as a lot of the systems are carved straight from that phenomenal title.

I would advise everyone to give the game a chance despite the flame wars surrounding it. It’s that good.

Elder Scrolls Online is available for PC and Mac on April 4th, and will release sometime in June or July for Xbox One and PS4.