A unique physics-puzzler more than willing to kill you again and again. 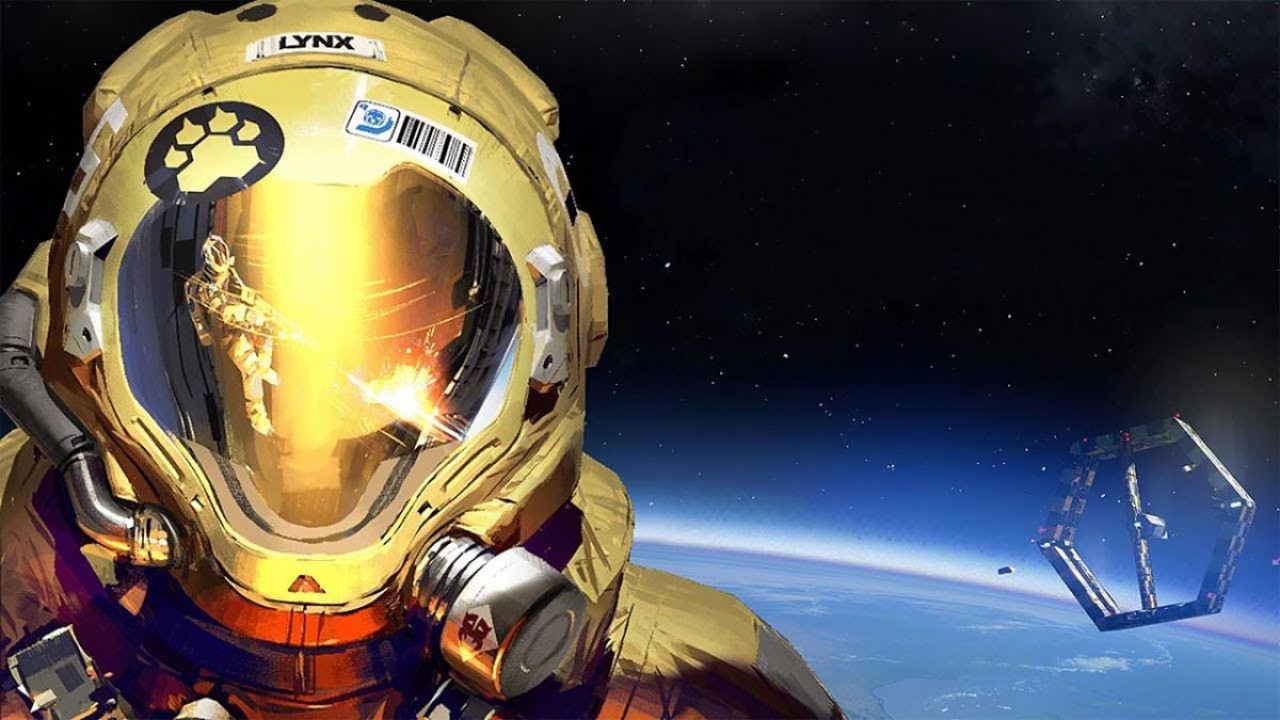 Hardspace: Shipbreaker is a slow, meticulous game until you accidentally punch a hole into a pressurized chamber, rupture a fuel line, or remove a reactor without clearing a path for it first. Or . . . well, there are a thousand ways to meet your maker while salvaging the various bits and bobs that make up the derelicts you have been assigned to scuttle. It’s not uncommon to find yourself in a zen-like state whilst delicately carving up old, decommissioned space-vessels, but as any laborer knows complacency is the soil in which disaster grows.

The basic pitch of Hardspace: Shipbreaker is exactly what it says on the tin: you’re out in orbit turning out-of-service spaceships into smaller chunks of metal and refuse, all to pay off your astronomical one-billion dollar debt to the Lynx Corporation. Before you take to the stars you must first sign your life away, and it behooves you to read the contract. The world of Hardspace is a dark satire of our own, one in which corporations have seized all sense of personal liberty. Stating you’ve never been in a union may seem old-hat in this day and age, but agreeing to vote for the company’s man for the Pan-American Senate? If a company asked people to sell their votes in exchange for employment nowadays there’d be a massive outcry, but in the world of Hardspace it’s routine.

It’s this complacent acknowledgement of your predicament that drives Hardspace: Shipbreaker’s general tone. You’re not here for wealth or glory – you’re here to get the job done, hoping to provide a better life for your loved ones Earth-side. The soft twang of an acoustic guitar fills your comms with a somber Midwestern melody, and an underlying buzz of synth lurks just below the surface, both selling the blue-collar melancholy of your predicament. Hardspace is lo-fi Sci-Fi, all the way down to the CRT-influenced HUD. Fans of Ridley Scott’s “Alien” will immediately pick up on the vibe Hardspace is throwing down. 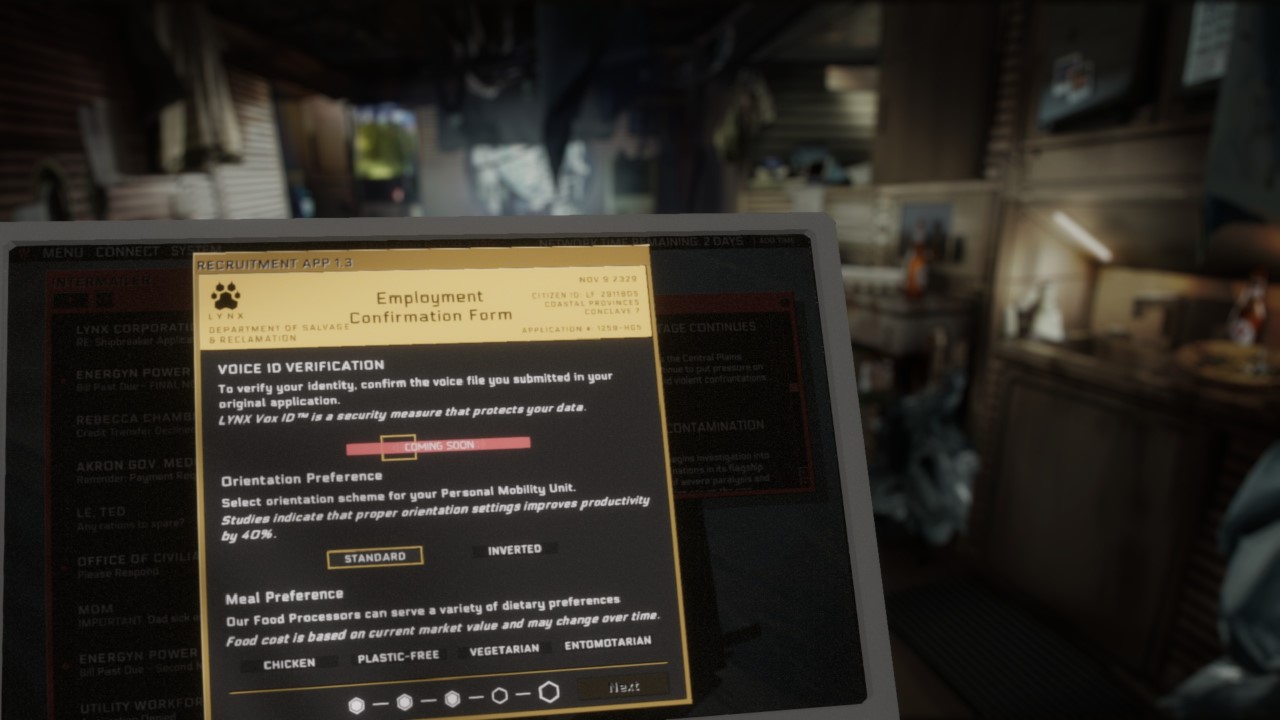 With mood firmly set, you’ll start off with a basic hour long tutorial with your mentor, Weaver, that teaches you all there is to know about ship-cutting, and you’ll spend much of that time learning how to move about in zero gravity. Hardspace: Shipbreaker is at its core a giant physics puzzler, and wrangling with both your momentum and that of the objects your pulling about with your grapple gun takes a bit of adjustment. Thankfully the controls are rather intuitive, and anyone who’s played a space-sim of sorts in recent years should acclimate quickly. There’s even a handy “brake” assigned to L-Ctrl that’ll stop you dead, which is a godsend when your trying to get that perfect cut.

By and large, the majority of your initial time in Hardspace: Shipbreaker will feel slow, and that’s by design. There are three colored “bins” in which materials can be deposited (and that you can fall into for an untimely demise), and figuring out how to pry assets free from these old junkers, grab them, then toss them into their respective bin without flinging yourself out into the void is enough of a hurdle at the start. Once you learn the core loop, and Weaver clears you to start working on your own, the other mechanics come into play.

You have fuel to manage, oxygen to resupply, and tool degradation to keep a wary eye on. There are bonuses for speedy work, yet penalties for bulking large segments without picking them clean first. There’s plenty to balance per job, and that’s all before factoring in the risks involved. Ships may still be pressurized, and popping them open in this state will lead to a massive explosion of debris and a swift death. Reactors will go critical after a short time after they’ve been removed, and if you haven’t cleared a path between them and the salvage bin below they’ll blow, killing you and shredding the ship in the process. 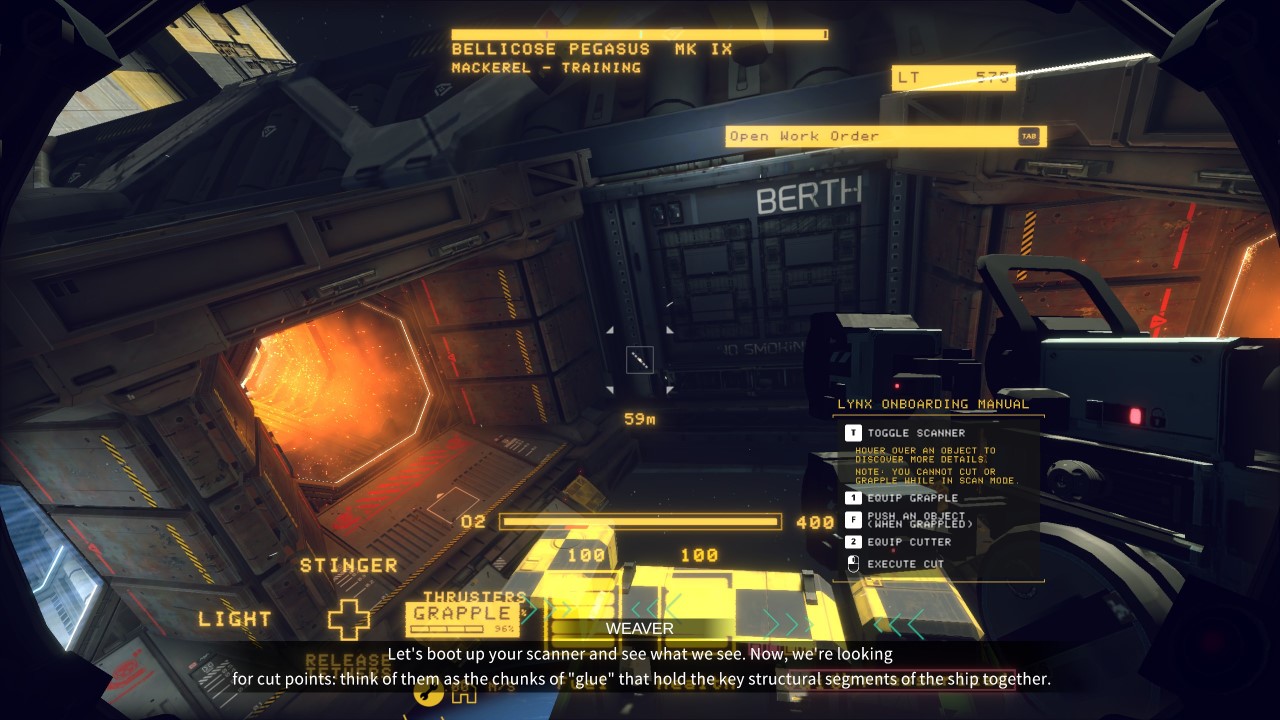 There are arcing currents to be wary of, tethered blocks of metal turned deadly high-speed boulders, and other hazards ready to end your life if you’re careless. The methodical worker is a safe worker, and that’s very much the case in Hardspace: Shipbreaker. But, in adding a time-based bonus and ever-depleting resources to the mix the game intentionally pushes you to rush. The quicker you salvage the bigger the bonus, yet the more accurate and piecemeal your cuts the more upgrade materials you’ll earn for your tools and suit. It’s this push-pull between safety and efficiency that makes Hardspace: Shipbreaker a hard game to put down, despite some of the tedium.

It should be noted that Hardspace: Shipbreaker is in Steam Early Access with a planned console launch once the game is completed. That also means there’s plenty to polish up in the upcoming months. Ship variety isn’t exactly robust yet, so you’ll be cutting up the same three vessels (two, if you exclude the training vessel) over and over again. Elements of the informative UI tend to overlap each other at higher resolutions, making it difficult to parse at times. The graphics are not what you’d call “great” just yet, but they already excellently convey critical information about your environment, and general performance is good.

In short: even at this early stage Hardspace has the basics of its visual language and design nailed down, making this game about slicing starships apart easy enough to parse. Out of the gate it’s in a good spot, so these next few months can be spent adding content and polishing up the little details. A quick glance at the roadmap shows a few of the issues mentioned above will be addressed, and I’m confident the team over at Blackbird Interactive is more than up to the task if this early build has been any indication.

I’m excited to see what the final product looks like when Hardspace: Shipbreaker leaves Early Access. It’s a unique gem of a game with a novel premise that seems simple on paper, yet intelligently begs players to weigh their safety against their possible rewards. At $20 there’s enough quality content here to recommend the early purchase, but if you like your games fully baked then keep an eye on this one over on Steam.