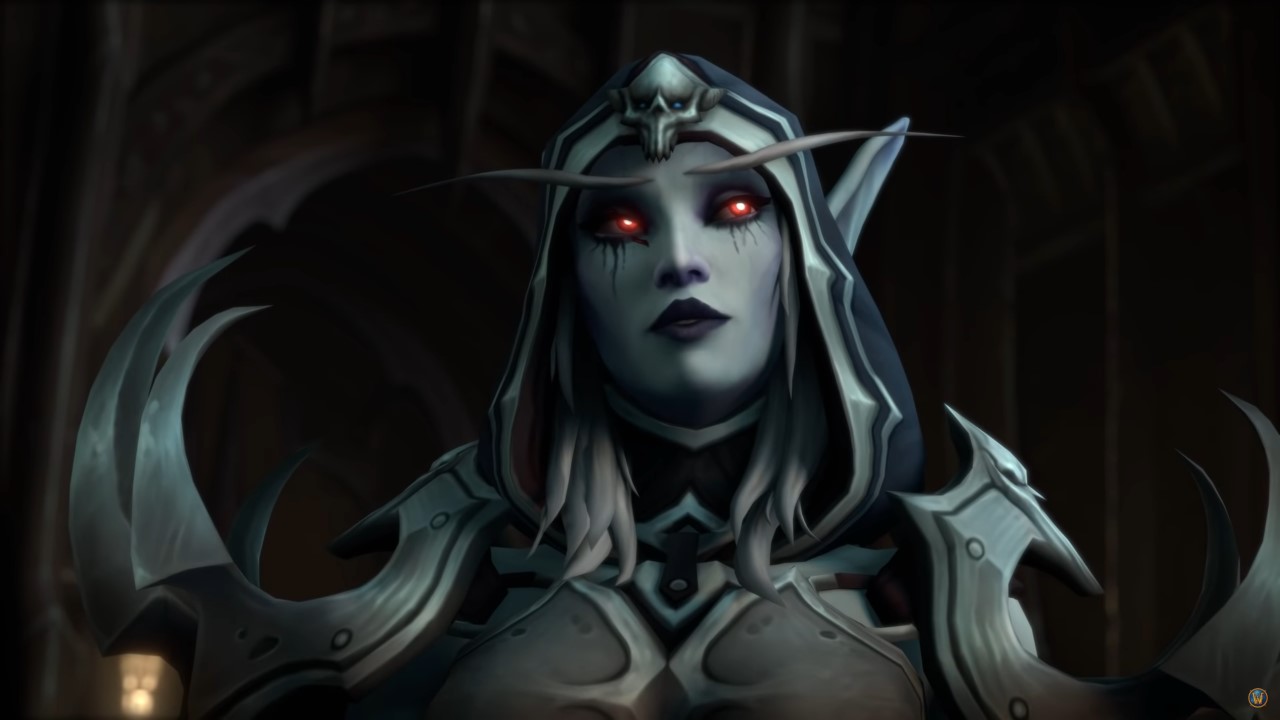 Sylvanas Windrunner has never really been one of the “good guys.” The Banshee Queen wasn’t exactly the nicest person in life, and she certainly hasn’t been pleasant to deal with in undeath. The choices she’s made since Wrath of the Lich King have positioned her for one hell of an ass-kicking, suffice to say. But, it seems Blizzard is hinting at the former leader of the Forsaken and one-time Warchief of the Horde having a heart after all. A dark, desiccated husk of a heart, but a heart nonetheless.

In a datamined cinematic leaked over on WoWHead that went live in-game yesterday, Slyvanas had a bit to say about her motivations in Shadowlands, and the whole speech appears to be setting up a possible redemption arc for the former Banshee Queen. I’m about to dive pretty deep into some major story spoilers for World of Warcraft: Shadowlands, so if you want to go in pure you’ll want to stop reading after this paragraph. The latest weekly Torghast story quest has the cutscene I’m referencing, so if you wanna catch up on the conversation that’s what you need to complete.

A Sylvanas redemption-arc would cliché, tired, and undeserved.

Slyvanas hasn’t exactly been subtle with her evil machinations, not since Wrath of the Lich King at least. It can be argued that prior to World of Warcraft’s second expansion she was more of a tortured villain; someone willing to do terrible things for a sympathetic cause. Since their “birth” the Forsaken haven’t been what you’d call popular. Even today there remain factions that view the undead as a threat that needs to be put down. Sylvanas had to be a cruel leader to counter a cruel world that would celebrate the entire Forsaken race returning to the grave.

And then the Blight happened. When Grand Apothecary Putress bombed both friendly and hostile forces with the new undead superweapon, Slyvanas was quick to call him and his supporters traitors. We can split hairs over whether or not Slyvanas was actually behind the incident at Wrathgate and the development of the Blight, but what’s not up for debate is her use of the supremely deadly gas since then.

Gilneas, the human nation next door with a bit of a werewolf problem? Genocide it with some Blight! The eternal Tarren Mill versus Southshore battle for supremacy in the Hillsbrad Foothills? Let’s use Blight to put an end to that, and any chance for anything living to ever return. She was handed a potent, horrific weapon of war, and utilized it with all the restraint of a toddler holding a sharpie.

You could say she was “securing the safety of her people,” since the Warchief at the time, Garrosh Hellscream, was pretty hellbent on burying the Forsaken permanently. I’ll give her that point of credit: the highly xenophobic Warchief was pretty keen on making the Horde an orc-first enterprise, and since the death of the Lich King her people had no way to reproduce. In short: Garrosh wanted the undead, well, dead, and the only way they could avoid extinction involved creating new corpses to raise. Not exactly a great position to be in.

But, Blighting every living thing within range of the Undercity and raising them with dark Val’kyr? That’s a pretty damn extreme way to solve that problem. Slyvanas would eventually ease up on her “kill them all, and let the Val’kyr sort them out” decree, but she never gave up on her plan to recruit more Val’kyr to bolster the Forsaken’s ranks. Once she was made Warchief of the Horde during the Burning Legion’s latest invasion of Azeroth, Sylvanas did what any responsible leader would do when forced with a cosmic existential threat: she ran off to enslave the queen of the Val’kyr.

Oh, but Sylvanas had yet to play her actual over-the-top evil plan. The Banshee Queen made kicking off the Fourth War her first order of business shortly after Azeroth was stabbing with a giant sword. No event is perhaps more infamous among World of Warcraft fans than the Burning of Teldrassil. Long story short: Slyvanas and her Horde forces successfully captured the iconic Night Elf seat of power without mass casualties. Yet, Sylvanas ordered the whole tree and everyone within it put to the torch, killing countless innocent civilians. Why? Because a dying Night Elf said something defiant to her. Talk about the ultimate “well, fuck you too” move.

Eager to outdo herself, Sylvanas would capstone this wildly evil act by nuking her own capital city with Blight, just to keep it out of the Alliance’s hands. A city that was still populated with citizens and the Horde army by the way. Remember: the Alliance was attacking the Undercity because she killed countless innocents because her pride took a hit. You still can’t go to the Undercity or the surrounding area, since the fog of Blight has yet to dissipate. She followed all this up by being an outward baddie all throughout Battle for Azeroth, before calling it quits and fleeing to the Shadowlands, where she now helps the Jailer with his dastardly plan. You know, the current supervillain we’re gunning for.

Sylvanas is beyond redemption. There was a time in World of Warcraft when you could justify her turning over a new leaf, but she’s committed so many cartoonishly over-the-top evil acts at this point that she’s beyond the point of no-return. I say this as a guy who’s been playing a Forsaken warrior since Vanilla. My toon hasn’t had a jaw in nearly two decades. I’m all about “power to the Forsaken,” and was rooting for Slyvanas up until the end of Wrath of the Lich King. I love the faction’s tortured history, and how they have to make ethically questionable decisions just to survive. They’re literal zombies living in a world that looks upon them as a grim reminder of a tragic past. There was some decent storytelling there.

But, by the Arbiter, it’s not even enjoyable anymore. Sylvanas becoming a key villain in Shadowlands has actually been a relief, because we finally have a chance to put her messy story to rest. It’s annoying to see yet another Warchief possibly becoming a raid boss, but the Slyvanas story needs to be put out of its misery. So, why does this latest cutscene leave me worried?

Currently in Shadowlands, the larger Slyvanas/Jailer story has moved forward via weekly quests that take place in the Maw and Torghast. This week’s quest concludes with a cutscene that subtly hints at Sylvanas still having a shred of empathy, little as it may be. Knowing how much Blizzard loves their redemption arcs, it’s worrying to see the Banshee Queen suddenly wrestling with her decisions. Even if we exclude her actions prior to Battle for Azeroth, she hasn’t demonstrated any nuanced or complex emotions concerning her actions. There are no “shades of gray” with Slyvanas: she is evil, and doesn’t what anyone else thinks.

Then there’s the cutscene that debuted this week. To bring you up to speed: at the start of Shadowlands, Sylvanas kidnapped many of Azeroth’s key leaders and had them brought to Torghast, Tower of the Damned, to be tortured and converted into powerful pawns for the Jailer. Anduin Wyrnn, Alliance Boy Wonder, hasn’t bent to their will yet.

So, what’s a bad guy to do? If you answered, “skip the foreplay and enslave the human leader” then pat yourself on the back, because that’s exactly what the Jailer wants Sylvanas to do. The Jailer gave Sylvanas a runeblade and an order: either convince Anduin to join the program, or use the runeblade to make the choice for him, Lich King style. Now, it’s important to note that happens outside the cutscene. We open the cinematic with Anduin in chains, and Sylvanas just chewing the scenery. She’s not just subtly evil; she’s a Saturday Morning Cartoon megavillain, clichéd monologue included.

But, as the cutscene progresses, her speech and mannerism start to subtly hint at a more noble purpose. A twisted, perverted purpose, but it appears Sylvanas does mean well! She’s seen and experienced the tyranny of death. She’s had her freewill torn from her. She’s clearly conflicted over what she must do, and what she believes. Which, if World of Warcraft’s writing in the past is anything to go by, it reads like the usual speech we get before an antagonist turns away from evil. The “see, I had good intentions the whole time,” sort of speech that hints at, you guessed it, a redemption arc. She just had to do all those terrible things, cause life is tyranny, and she wants to free us all! She’s simply misunderstood.

Blizzard’s had a recent obsession with redemption arcs. Kael’thas Sunstrider, former leader of the Blood Elves and douchebag extraordinaire, is on the virtual path towards redemption in Revendreth. Illidan’s redemption arc was a key narrative within the Legion expansion (though he wound up remaining an arrogant asshole, so there’s that). Those are the two most recent and largest, but the game is chalk full of ham-fisted redemption arcs. It’s absolutely exhausting at this point.

It doesn’t help that Sylvanas’s turn to the ultra dark-side feels all too similar to Garrosh’s fall from grace. Granted, he didn’t have far to fall, but Slyvanas marks the second time a Warchief of the Horde has gone full-blown antagonist, and as a Horde player it’s getting old. When is Greymane going to break bad!? Jokes aside, Slyvanas’s entire arc up to this point has been an absolute mess, and setting her up for yet another World of Warcraft patented redemption arc would be a mistake. She’s gone to far – having committed literal war crimes – to deserve one, and at this point it’s an overplayed trope within World of Warcraft.

Shadowlands opens the door to new worlds, new villains, and new stories. I’m not opposed to Sylvanas displaying some genuine internal conflict (even if it feels years too late for her to suddenly discover she has more than one emotion), but it’d be a mistake on Blizzard’s part to have her suddenly back on Team Good. It’s time to bring Sylvanas’s story to an end. Give her a proper sendoff by humanizing her a bit, and move on (to hopefully fewer redemption arcs).