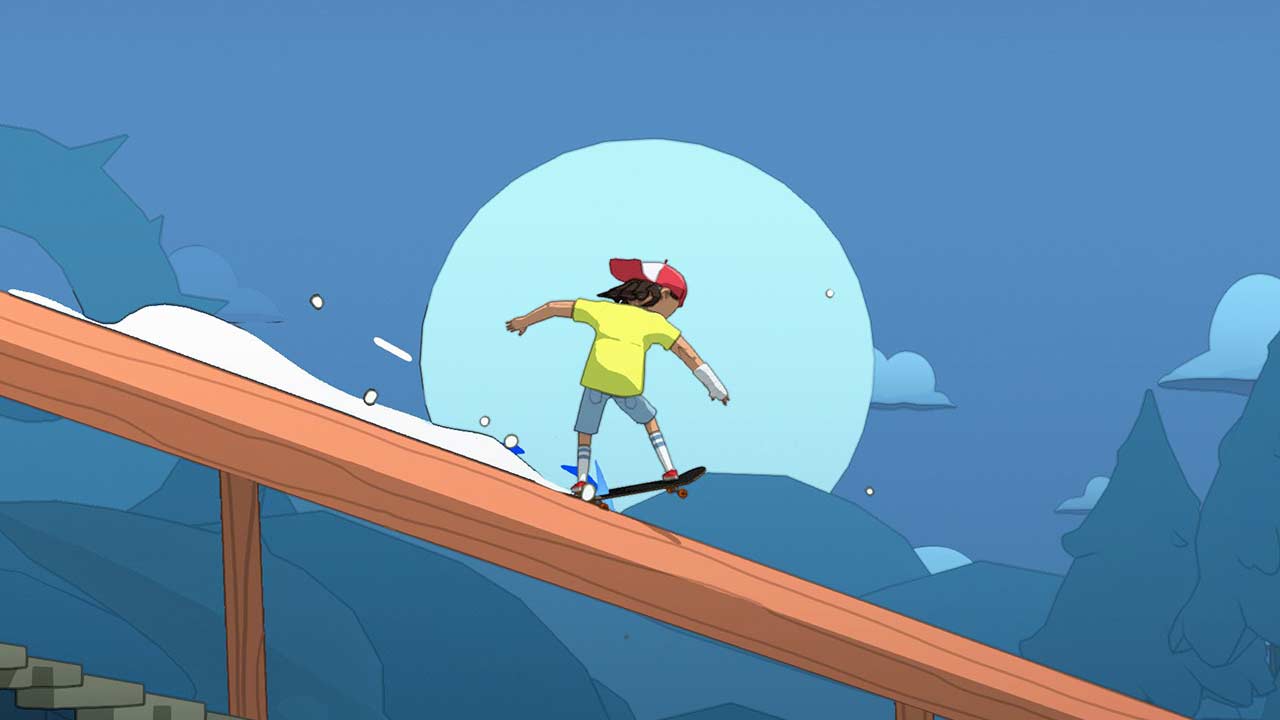 When Roll7 released Olli Olli for the PlayStation Vita back in 2014 it felt like a shot in the dark.  It was much different than any other skateboarding game out there, a genre which saw trends go from arcadey to simulation as we moved from an era of Tony Hawk to Skate.  Who would’ve thought that a side-scrolling skating game with a simple premise could be so deep and engaging? It didn’t hurt that the Vita was a perfect fit for a game of this type, but Olli Olli made it’s way to multiple platforms, with the latest release being on the Nintendo Switch just a couple of years ago.

Along the way Olli Olli garnered plenty of praise (including a BAFTA award). It’s a timeless classic that you can spend hours upon hours on, because it holds to the notion of being easy to pick-up, fun to play, yet hard to master.  The follow-up, Olli Olli 2: Welcome to Olliwood was a worthwhile successor to the original, yet it was very much cut from the same cloth.  This was not a bad thing, but Roll7 has something new on the horizon with Olli Olli World.

Both games were side-scrolling skating games which had simple up-front control schemes.  Push the button to kick and push your board, while using the thumbsticks to do things like jump and grind.  Of course, things get way, way more complicated than that, but it was pretty much a straight forward affair.  Until that is, you got into the mastery angle of things, at which point you could be spending plenty of time trying to commit the many, many tricks to memory.

For those that are already fans of the series, rest assured.  Olli Olli World is a natural progression to something bigger for the franchise.  What we played holds true to the spirit of the previous games while opening things up ever so slightly with a focus on branching levels and an improved visual style, Radlandia is a beautiful, fantasy world with all of the trappings of a modern game with things like progression, upgrades, and customization.  And that’s just the stuff we got to see.  There’s going to be a lot more here, with things like league play, shareable levels, and more that really get me excited when it comes to replay value.

A natural progression to something bigger for the franchise

Olli Olli World takes the premise of Olli Olli and builds on that in smart ways.  We got a chance to play through a good chunk of the game and walked away as impressed as we have been ever with the series.  The one and only thing that felt like it was missing was the handheld component that I had happened to fall in love with the game on.  (RIP Vita).  It’s a big departure from the previous two games.  There’s been a considerable amount of work put into building out this world, the characters and creatures that reside here.  The art style is awesome in Olli Olli World an area that the original two games didn’t get to flex much muscle in.  But, to their credit, Roll7 gave their weird levels in the previous 2 games plenty of personality as well, they were just working with a lot less and it’s clear that they’ve let their imaginations run wild. 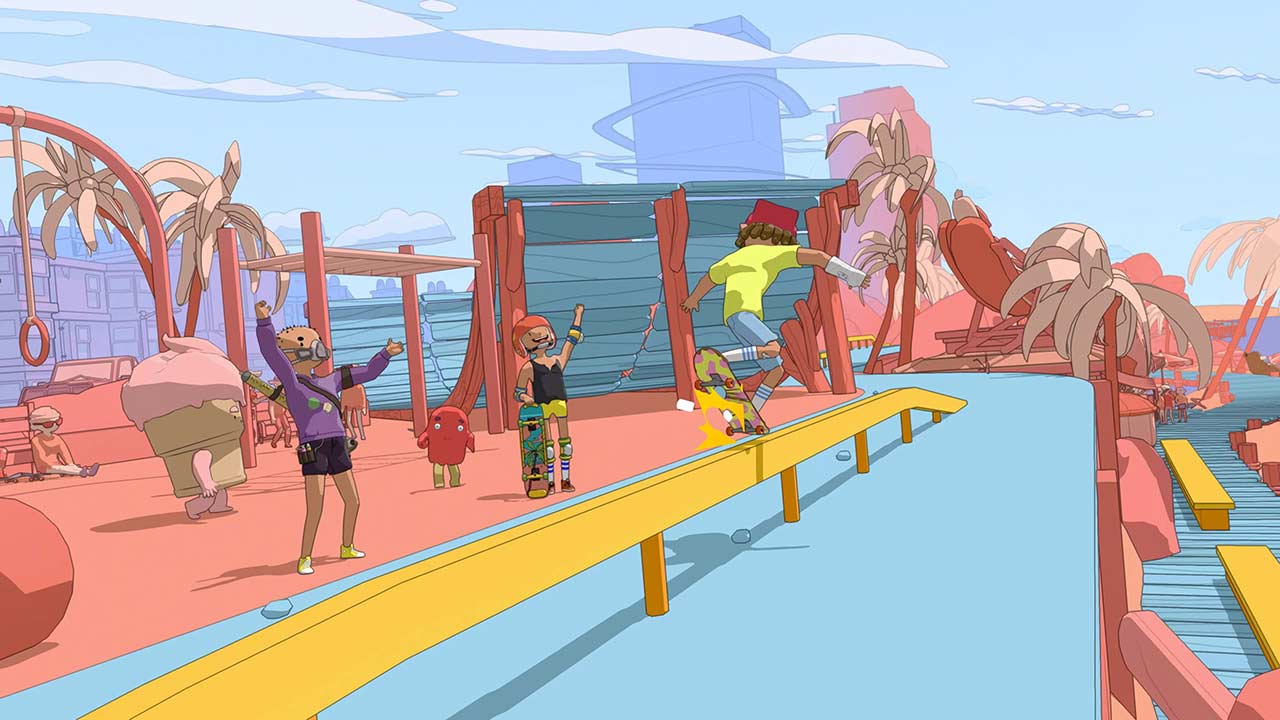 The tracks themselves are still the star of the show though and with Olli Olli World there are a ton of different branching paths in each one that you’ll need to master to complete your objectives to seek out those high scores.  The gameplay has been adjusted slightly with the ability to transition at will between parts of the track, while also being able to take different routes that allow you to open up new secrets and collect special items. But it’s not just the ramps and rails that are enticing, it’s everything that surrounds the track.  Radlandia is a fantasy skateboarding Utopia where absurd creatures and colorful characters co-exist.  You really can’t say enough for the art-style here and the world that’s been created as it begs to be explored.  You probably won’t get to do as much exploring as you want, but you’ll see plenty of cool stuff in your time with the game.  Olli Olli World is a skateboarding fever dream come to life.

Olli Olli and Olli Olli 2 were really all about that high score — checking off the boxes and completing the specific objectives laid out to you on each course.  That included mastering tricks, learning the track layout, and of course, stringing it all together to max out your score multiplier.  All of this core stuff is still very much the center of it all in Olli Olli World, but so much has been added around the fringe.  If Olli Olli was the base model, Olli Olli World is the deluxe.. with all the bells and whistles.  You’ve got things like side quests and a rewards system that really has you going for a little bit more than the score itself.  If you enjoyed the score hunting and quest for mastery of Olli Olli you’ll have plenty to sink your teeth into here.  But for those that want a little less, the game is still very much enjoyable purely from a sights and sounds perspective.  You can see players of all skill levels really getting a lot out of Olli Olli World on a session to session basis. 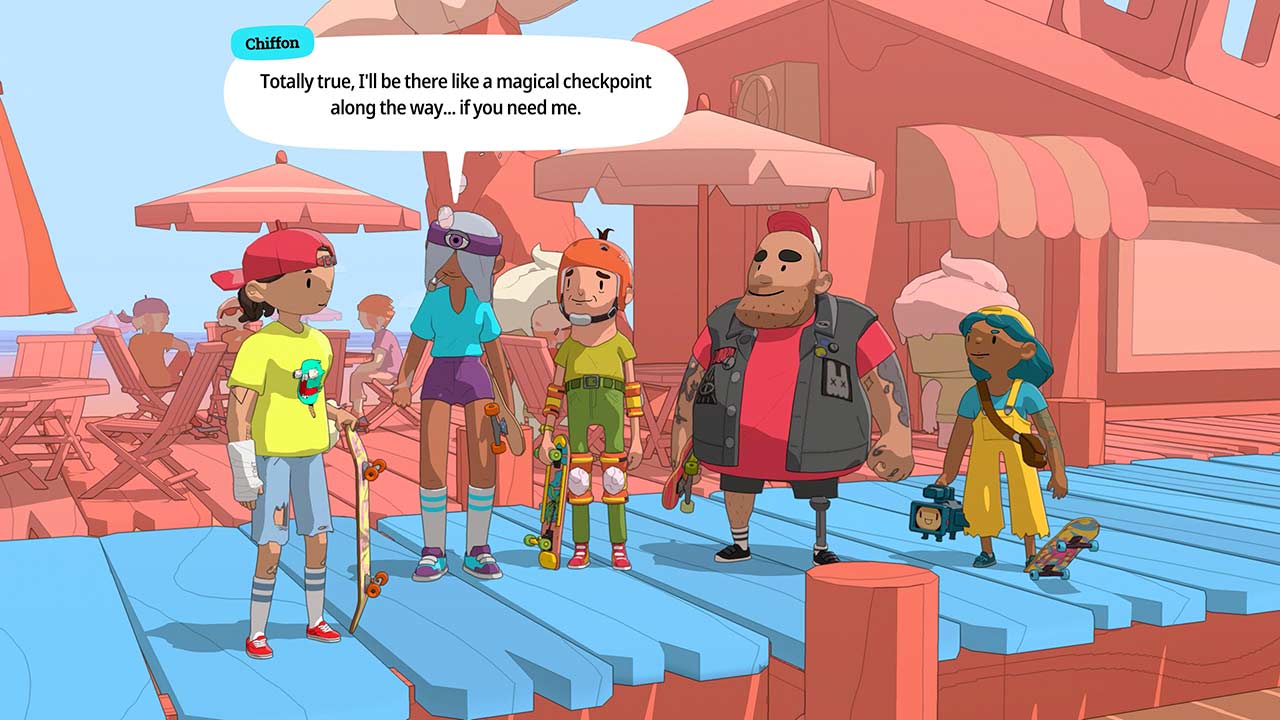 What we didn’t get to check out, and what really sounds like it could be an awesome addition to the game is the Sandbox Mode.  Roll7 says that there are going to be “millions” of levels for Olli Olli World.  For someone that played the original’s levels many many many times over, this is going to be incredible.  Giving players the opportunity to create in this world sounds amazing and we’re really interested in seeing just how intricate things are going to get with this game.  Even if you aren’t creative, the other new feature, the leagues system, seems like it’s going to scratch the itch for the score chasers that want to get a chance to not only challenge themselves but others.

Roll7 really looks like they thought of every conceivable way to improve upon Olli Olli and did just that with Olli Olli World.  The facelift, the new modes, and their ability to keep it all feeling like a natural evolution for the series while being a massive step forward is nothing short of amazing.  While the preview was just a slice of things to come, it showed a promising glimpse for the series… even if we had to play it on PC.   Due out this Winter, Olli Olli World will arrive on the PlayStation 5, PlayStation 4, Xbox One, Xbox Series X/S and oh yes!  the Nintendo Switch.