Surgeon Simulator: ER is a Good Game that Runs Terribly 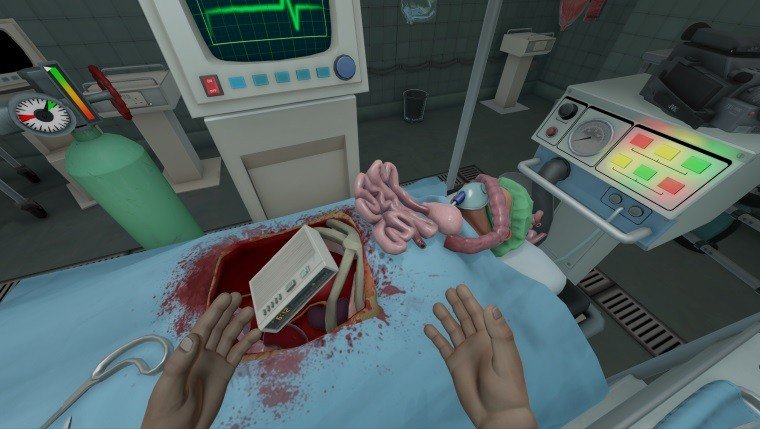 Surgeon Simulator has always been a fun, quirky game. What started seemingly as a joke has spiraled into a very large gaming franchise that has racked up millions of sales across multiple platforms. The games rely on gory, slapstick comedy combined with controls that don’t really function well, but lend themselves perfectly to the comedic nature of the experience. So when the franchise hits VR with a full blown spinoff, it’s interesting in a few ways. Unfortunately Surgeon Simulator: ER is currently too broken for me to give a full opinion on, and it’s resulted in a few hours of literal headaches and stomach problems.

The game is actually better than I anticipated. Surgeon Simulator’s off putting controls have always been one of its most humorous parts. Switching to VR, where the Vive controllers allow for extreme precision, seemed like it could take away from the experience. Instead Surgeon Simulator: ER actually lives up to its name more than any other title in the series. This feels like an actual simulation of surgery, with goofy blood and everything else you expect layered on top.

I found myself, multiple times, looking closely at things, slipping a scalpel between organs, trying to snip that last piece of tissue. I also whacked at a rib cage with a hammer for a solid minute, so I’m not saying this is truly serving as a surgery simulation experience. Instead it just enhances that feeling, while remaining the casual and fun game that players came to love on PC, other platforms, and of course through YouTube videos.

Unfortunately, the game runs terribly. VR is a taxing medium, but my machine is able to handle almost anything I’ve thrown at it. Much more visually intense games run like a dream, but Surgeon Simulator: ER has required a ton of tweaking. Even after setting things to much lower options than I’d like, the game still has problems, including frame drops and tracking mishaps. These would be detrimental for a regular game, but for a VR experience it can be physically taxing.

Surgeon Simulator: ER is broken up into different sessions of surgery. So far, I’ve only been able to get through one at a time. This is both due to the game crashing a few times, and because once I’ve completed a surgery session, I usually need a break to catch my breath and calm my stomach. It’s not a wholly unfamiliar feeling, as I’ve been playing a lot of VR games. But I can usually handle even the worst of VR experiences for much longer than I’ve lasted in Surgeon Simulator: ER.

I’m hoping an update comes out that will clean this up, but as the game stands now it is not playable for long enough stretches to complete the game any time soon. What I’ve played, I’ve enjoyed a great deal, but unless this gets worked out I’m going to be avoiding it for a while.