The Legend of Zelda: Breath of the Wild – A Few Hours with the Finished Game on Nintendo Switch 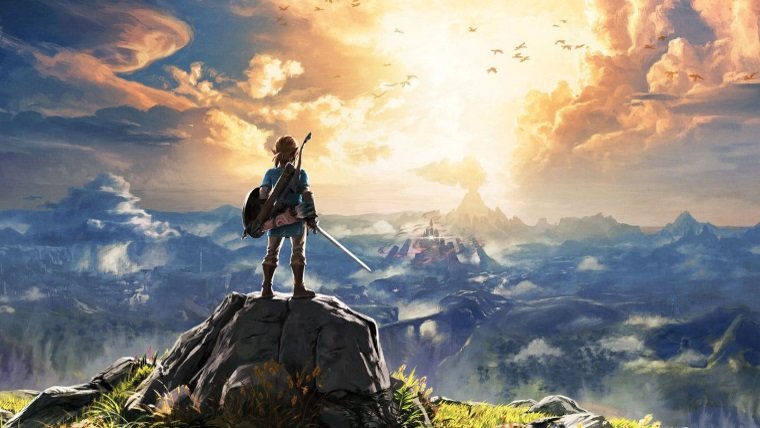 Not being fans of resting on their laurels, Nintendo also took this opportunity to totally rework the formula that has been in place for almost 20 years, reshaping how a 3D Zelda game works, while tackling the open-world genre for the first time. How the hell can the game end up impressing when it has all of this going against it? Well, for the first hour or so of playing The Legend of Zelda: Breath of the Wild, I was worried that it hadn’t.

Breath of the Wild does a great job of fixing the problem of Zelda’s slow start. There’s no long intro sequence showing you the absolute basics of the game. You wake up, you have no memories, some old dude tells you to do some stuff, then you go do it. It’s simple, and gets you playing right away. However, while this doesn’t look or feel like a traditional Zelda tutorial opener, it still is, it’s just a much less offensive one.

This is also where players will be introduced to the other big change for the Zelda series, voice acting. The English actors are not the best in the business. In fact, if I can figure out how to switch the language to Japanese, I will. It’s serviceable though, and it’s not as robust as I thought it was going to be from the voice filled trailers. Instead you usually get some quick dialogue which transitions to traditional text with random noises interspersed. It’s unfortunate that this isn’t a totally voiced experience, but so far it hasn’t been a problem for me. 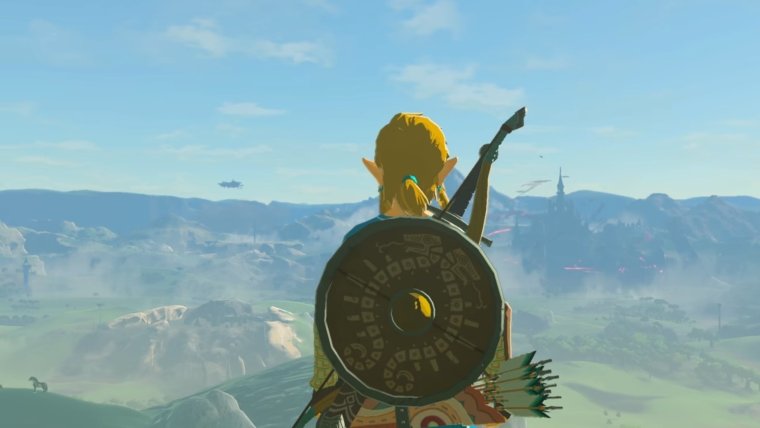 After an hour or more in the opening area, depending on how quickly you pick up the new mechanics, Zelda: Breath of the Wild will open up to you. So far every single area of the game has been accessible using the suite of abilities that I unlocked in this first area. Once you have them, the game practically says “OK, great job, now go do whatever the hell you want.” For Zelda fans this is both amazing, and daunting. Thankfully, the game does point you in the right direction, if you want to continue with the story, and build up your skill and abilities.

The Legend of Zelda: Breath of the Wild is exactly what we all hoped for

Doing so will only get you so far though, and eventually you’ll start exploring. Whether it’s because you got lost, or bored, or you just saw something cool off in the distance that you wanted to check out, at some point you’ll find yourself far away from the path that seemed to be laid out before you. And that…well that’s when Zelda: Breath of the Wild becomes one of the best damn games you’ll ever play.

I hope, at least, since this is just a preview, and not a review, so this is all early impressions. This feeling could go away at some point, if the game goes way off track. However, it hasn’t done so so far. In fact, every time I pick up Breath of the Wild, the game gets better and better.

This is largely because of the open-world design, which has been brought into the Zelda series in such an amazing way. The promise of a Zelda game has always been the joy of adventure. Climbing a mountain, exploring a cave, stumbling across a lake, or getting lost in the forest. The games are made to make you feel like you are a hero on a grand quest. They’ve mostly succeeded at this, but by crafting these experiences from start to finish, with exploration almost being scripted into the game’s path. 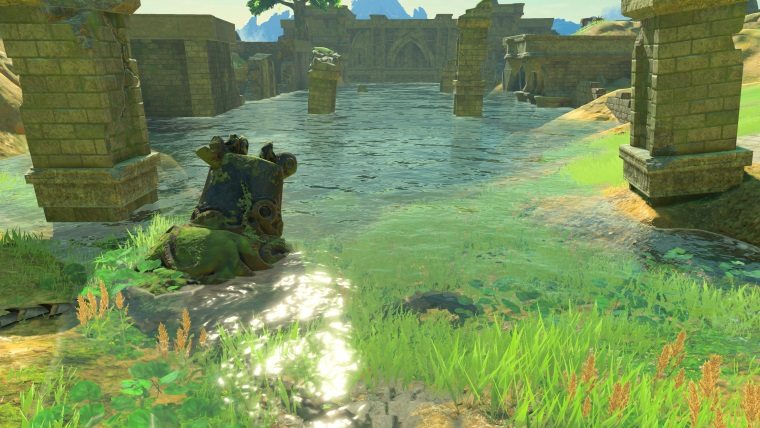 Breath of the Wild supersedes this by simply giving you a massive, open world and letting you go wherever and do whatever you want. Sure, there’s still a story, and there are still missions to do, towns to explore, people to help, but it’s all so freeform, and the simple act of getting from one place to another is so enjoyable, that it feels totally new and different, despite being similar to other open-world games.

Maybe an example works best. While playing The Legend of Zelda: Breath of the Wild I decided to do some main quest missions. This made it so I had to go to a nearby town, which was in an undiscovered area of my map. So, I climb a mountain and scope the area nearby for the tower that adds location info to my map.

After spotting it I head toward it, but along the way I see a Shrine, sort of mini-dungeons that have puzzles and rewards. So, I swing by there, but there’s a group of enemies outside. Since I just found a new and very powerful bow I decide to go stealthy. Perched on top of a nearby hill I snipe the lookout, leaving the three Bokoblins near the fire. I sneak up near them, trying to steal their weapons to make the fight easier, they spot me, so I take them out with my trusty sword.

I head into the Shrine, beat it and am back on the path to the tower, which I need to get the map, so I can find the town, where someone is living who can help with the mission. Once on the tower I spot about five other interesting things to take on, and this cycle will repeat ad nauseam until I finally decide to skip some stuff, being sure to mark it for later, and do some damn missions. 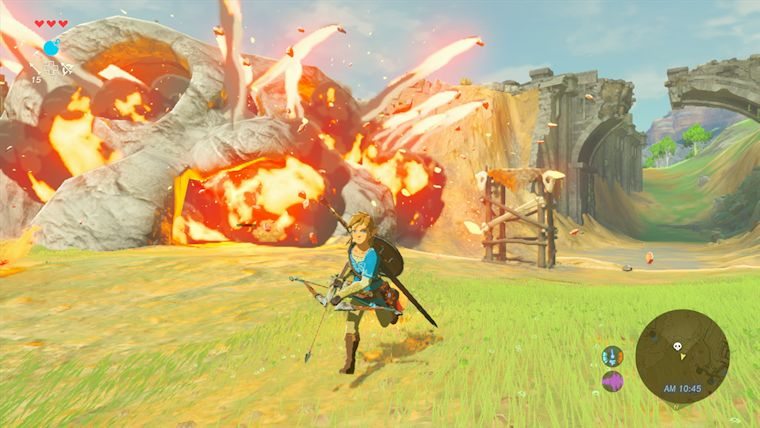 And this isn’t even getting into horses, which you find in the wild, tame, and can store at a special ranch. Or cooking, which is a deep and important part of the game, requiring you to endlessly collect items. Or weapon degradation, which is actually a bit annoying, but the abundance of weapons makes it not feel so bad.

It’s also important to note that Breath of the Wild never feels empty. Even when you’re out in a seemingly dull field, there’s always something interesting nearby, whether its enemies, animals, hidden secrets, or something totally new. The game feels alive in a way that’s tough to describe.

In short, The Legend of Zelda: Breath of the Wild is exactly what we all hoped for. It takes the open world genre, layers it onto the Zelda formula, and produces what might be one of the best gaming experiences of the last few years. There’s still so much left to explore in the game that I can’t make any definitive statements about it yet. In fact, after a few hours I feel like I’ve only just begun exploring this massive map.

This is The Legend of Zelda: Breath of the Wild

And indeed I have only just begun, with both Breath of the Wild and the Nintendo Switch, which you can read my preview of right here. Playing on the Switch does seem to be a better experience than what I had on Wii U. I’ve had a few instances of framerate stuttering, but it’s not been detrimental, and I’m hopeful that an update will help with this, since few other reviewers have mentioned it yet.

The game also looks gorgeous on the system. It will never live up to AAA experiences on other consoles or PC, but the art style here is truly something to behold. Some areas have left me literally speechless thanks to their amazing design. Playing on the go is also an amazing experience. The batteries do last the advertised 2-3 hours, and the Switch is a fantastic handheld device. The controls are great, the screen is beautiful, and it’s just surreal to be playing a game like this wherever you want.

So far the Switch and Breath of the Wild have been massively impressive, so we’ll see if they hold up. Watch for our reviews of both when they hit next week.

Home / Original Articles / The Legend of Zelda: Breath of the Wild – A Few Hours with the Finished Game on Nintendo Switch