Last weekend I packed up my usual gaming convention gear and set off for Philadelphia, where PAX Unplugged hosted its second year of fantastic board game fun. Yes, unlike most of the cons that I attend every year, Unplugged is focused solely on the types of games that (mostly) don’t use electricity, hence the name. In case you weren’t aware, board games are having somewhat of a golden age over the last decade or two, so now’s a great time to share the top 5 best board games from PAX Unplugged 2018.

A quick note, due to the nature of board games and the limited time available I did not even come close to playing every game at the show. This is not a comprehensive list, and just because a game is not on here does not mean you shouldn’t check it out. These are just my favorites from what I had a chance to play or see, which was a ton of stuff.

KeyForge: Call of the Archons

KeyForge: Call of the Archons, the latest card game from Magic: The Gathering creator Richard Garfield, was a massive hit at PAX Unplugged 2018. Generating a huge line throughout the show and selling out at every booth that had cards available, you could barely turn around without being hit in the face with this this new title. And it’s all for good reason, as KeyForge looks to right some of the wrongs that the big boys in the card game genre have been plagued with.

Currently, if you want to be competitive in Magic: The Gathering you will need to spend hundreds, possibly thousands of dollars. This is because the game relies on you either buying packs of cards, or hunting down the specific card you need to create your best deck. KeyForge eliminates this in some ways with its novel and interesting design process. Players do not purchase packs or individual cards, instead buying whole decks.

While this might seem like more money is needed, there’s more at work here than it seems. Each deck of KeyForge cards is generated via a proprietary algorithm which creates a totally different deck than anyone else. Part of this is naming the deck, which means you cannot sub in or out any cards. What you buy is what you get, and you either need to make it work or buy a new one. There’s still a lot of room to grow for this title, so we’ll be checking back to see how it develops as it hits the more competitive scenes. My Starter Set, like almost every other, is on backorder right now due to demand, but my two demo sessions went great and left myself and my friends feeling like this will be a regular game on our tables. 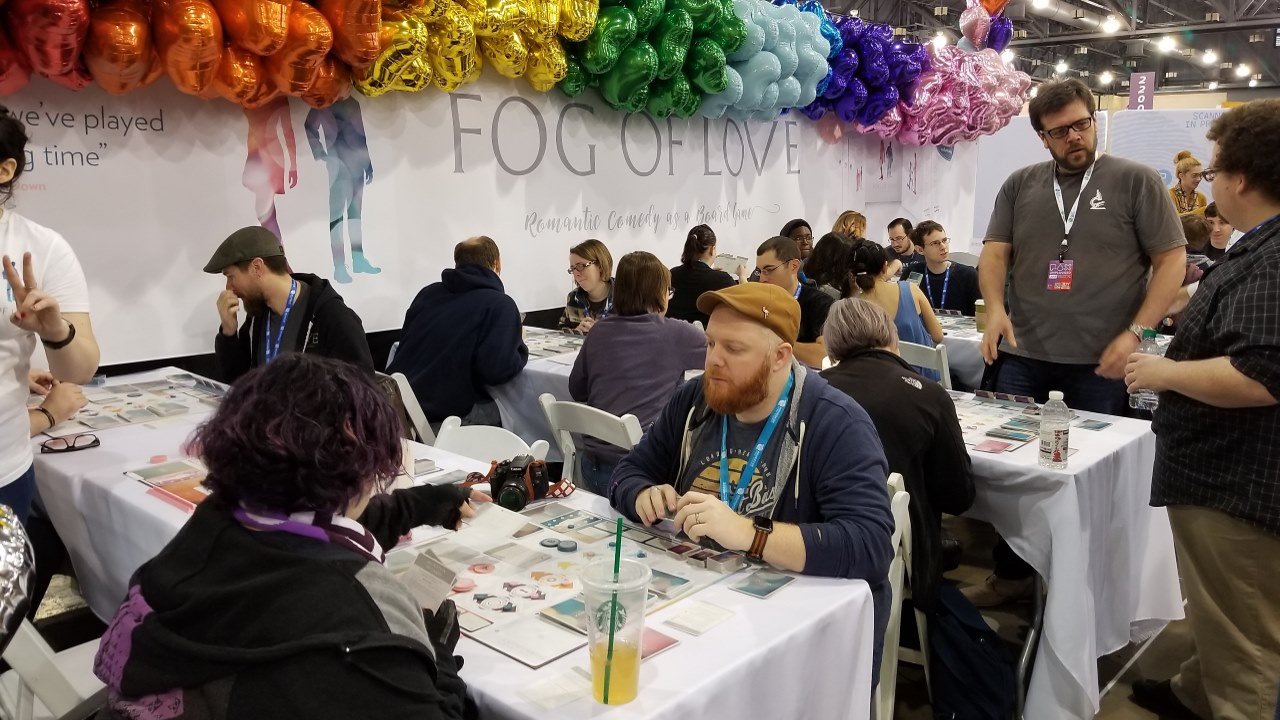 Fog of Love has been generating buzz since long before PAX Unplugged 2018, but that didn’t stop it from having a constant stream of players for its large booth setup. Fog of Love plays out as a sort of romantic comedy/dating simulator or role-playing game. Two players work together to generate their characters and then work through an entire relationship, from dating, to potential marriage, having children, divorce, separation, and anything in between.

Viewing it as a role playing game fits best, and that seems to be the design intention. You inhabit the character you created, being presented with different relationship scenarios and having to decide how they would react. If you and your partner are in sync, then your connection grows. Otherwise you might watch as your love drifts away into nothing…just like real life.

This game really is something special, and was a highlight of my time at PAX Unplugged 2018. If you’re looking for a new two player game or just a new role playing experience, you should have this on your radar.

Fireball Island: The Curse of Vul-Kar

This remake of the 1986 classic was a big hit on its own, but it’s also just one of many reimagined and/or re-released titles from the past that shows the strength of tabletop gaming. Restoration Games has made this their main focus in the board game arena, bringing back classics such as Downforce and Stop Thief! for modern audiences. These older titles often have unique elements to them that have been neglected by newer games. For Fireball Island, its massive island playspace is the star of the show.

Featuring a giant central mountain that looms over all of the players’ actions, each step could be your last as marbles are flung down channels, simulating the titular fireballs. While I didn’t get a chance to check the game out, a few friends did and they were quite impressed. It’s not the rule heavy, hours long sort of game we’ve seen more and more of over the last few years, instead offering a fast-paced, action-heavy experience for a wider audience. 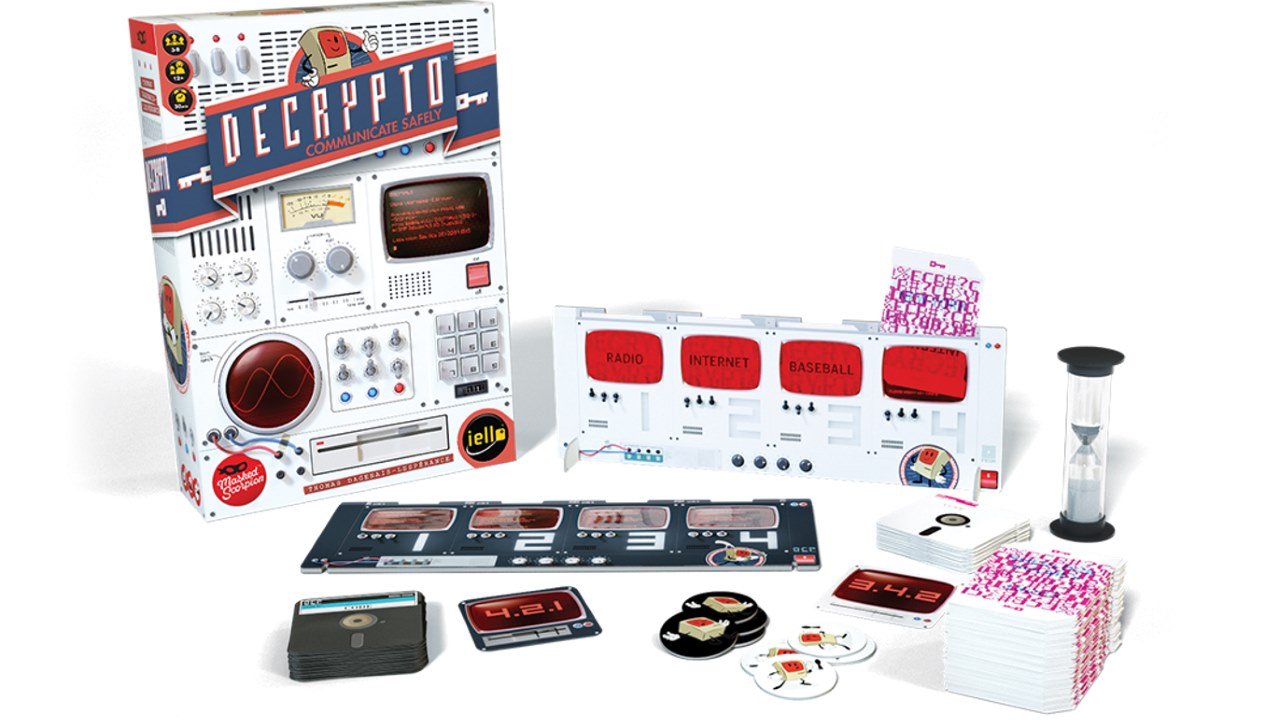 Most of the games on this list are longer and more complicated than your standard board game that people are used to, so I wanted to throw in a smaller game that still offers a ton of fun. Decrypto is certainly that, bringing some elements of the hugely popular Codenames together with more directly competitive play. Two teams sit across from each other, a decryptor device sitting directly in between them. On it are four words which are the key to victory or defeat.

Using different words, phrases, or names players have to get their partners to guess which words on the screen they are supposed to be guessing. However, while you make your choices, the other team does as well. Get your clues right and you don’t get much beyond not losing, but if the other team guesses them right as well then they score a point. First to two successes on the opposing team’s turn wins, but if you fail twice on your turn you lose.

It’s one of those deceptively simple types of games where you start off thinking it’s one thing and by the end it becomes totally different. For example, if you want your partner to guess the word Robot, you can say Automaton. The other team might figure that out, or they might not. A turn later you might use Metal as a clue, at which point they’ll certainly put the two together to figure out the answer. From then on, any clue you give that they can tie to a robot will give away the answer. So it’s all about being clear to your partner, who can see the words, while staying unclear to the other team that can’t.

If you read my previous list of top board games for video game fans, then you already know that I love Battlestar Galactica. Both the show, and the amazing board game from Fantasy Flight. While that game is now out of print, the license lives on and is venturing into uncharted territory.

Battlestar Galactica: Starship Battles is less a board game and more a tabletop spaceship combat simulator. Two to four players duke it out, either piloting a Viper or Cylon Raider. Choosing from maneuvering cards, players control both their speed, trajectory, momentum, and even the angle of their ship. This game, much like the show, operates off of more realistic Newtonian physics, allowing you to be moving one way, while aiming another. All of this adds up to a tactical and tense experience that simulates the epic dogfights from the show.

While I can’t say how well Battlestar Galactica: Starship Battle stacks up against its genre opponents, which include heavy hitters like Star Trek Attack Wing and Star Wars X-Wing Fighter, I had a blast trying it out. It was one of the few games that occupied a spot in my bag on the way home, so it’s at least worth a look if you’re a fan of the franchise like me.

And to insert another totally different choice, Exploding Kittens’ producer The Oatmeal was the star of the show for many. Not because of the games they had, though many people love Exploding Kittens and Bears vs Babies, but thanks to their extremely inventive booth. Featuring a giant kitten, you walked up and were immediately asked via a sign in the window to make your merchandise selection. You could buy the game, some pins, or any other item from their store, but what everyone waited in line for were the random items.

Giant Q-tips, an eggplant, fairy wings, a cone of shame, and tons more made their way out of the kitten’s mouth. I received a hilarious signed picture of Kitty Perry (Katy Perry with drawn on ears and whiskers). The inventiveness of The Oatmeal is the reason Exploding Kittens became such a phenomenal hit and they’re keeping that going even through their booth design. It was brilliant, hilarious, and fun, and certainly got more people to check out the game and its booth.

And that was the Top 5 Best Board Games from PAX Unplugged 2018, according to me. Again, not a comprehensive list. There were simply too many great games to check out. Ones I wanted to try, but didn’t get a chance to include Azul: Stained Glass of Sintra and Discover: Lands Unknown. I also enjoyed Battlestar Galactica: Starship Battles enough to buy it, but it’s a genre I don’t know well enough to say if it’s a top contender. If you saw any games at the show you want to know more about, make sure to say something in the comments below.