PAX East 2018: A few have tried to do Mech Combat in Virtual Reality, but Vox Machinae raises the bar.

Whenever a gamer is introduced to VR a few things go through their head as far as the potential of the technology goes. One of these, almost universally is how awesome a really solid mech game would be in VR. Unfortunately we’ve yet to see this dream come to fruition though, with a few contenders rising and falling. RIGS for PSVR was a solid multiplayer experience, but it felt less like a mech game and more like a standard shooter. Archangel floundered for a few reasons. Now we have a new contender, and if my hands-on preview at PAX East 2018 of Vox Machinae is anything to go by.

You are not the mech, you are in the mech

Vox Machinae is a multiplayer focused mech title which draws from a lot of the classics of the genre. Players control their machine by manipulating levers, buttons, and dials from within an elaborate cockpit. You aim by looking, but that’s the last simple thing about controlling your mech. To turn you have to grab a lever on your left side and push it left or right. Moving forward is handled by the throttle, also on you left side, causing confusion at first but fitting perfectly with the feel of the game once you get the hang of it.

Everything in Vox Machinae is slow and methodical, though things do certainly kick into high gear when the fighting breaks out. As I moved across the battlefield, searching for the other players who were nestled in their VR headsets across the room from me, I struggled to handle all the mechanics that were required to move this massive machine. That’s the point of Vox Machinae though, as one of the three developers working on the game explained, “you are not the mech, you are in the mech.” 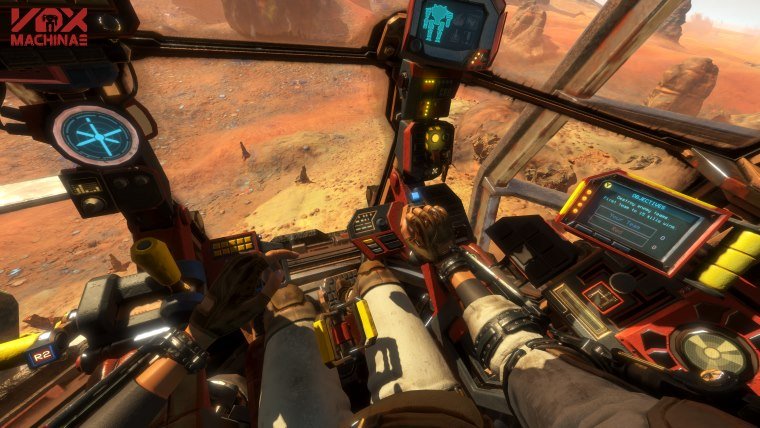 This might seem like a simple idea that wouldn’t really impact the gameplay, but it is actually pretty huge and is the main reason why Vox Machinae feels so unique in the VR space. Yes, you aim by looking at your target, but everything surrounding that takes real effort and feels like you’re actually piloting a multi-ton piece of machinery. Movement is low, getting across the battlefield takes time, and if you end up in a bad spot you’re pretty much done for. You have a jetpack that can help move you around faster, but this too takes time to get the hang of. You can’t just blast off and land in the middle of your enemies, they’ll destroy you, and even if they don’t you already busted your legs from the fall.

Through two full matches of Vox Machinae I gained a real appreciation for the work of Space Bullet’s relatively tiny development team. The game looked fantastic, with realistic damage on display with each laser shot or missile strike. The maps were well designed and the game flowed well. It was that core gameplay that was the real draw though. Putting someone into the VR space then allowing them to pilot a massive mech has been the dream for many all along and so far it’s been illusory. That dream might finally be coming true though with the release of Vox Machinae, which could be out this year for Early Access.

And if you’re worried Vox Machinae might fall victim to the same fate of other multiplayer focused VR titles, fear not. Players without a VR headset can still jump into the action and even play against their VR counterparts. According to Space Bullets, there isn’t an imbalance here thanks to the benefits of one platform being outweighed by the benefits of the other. We’ll hopefully find out when Vox Machinae hits Oculus Rift and HTC Vive later this year.