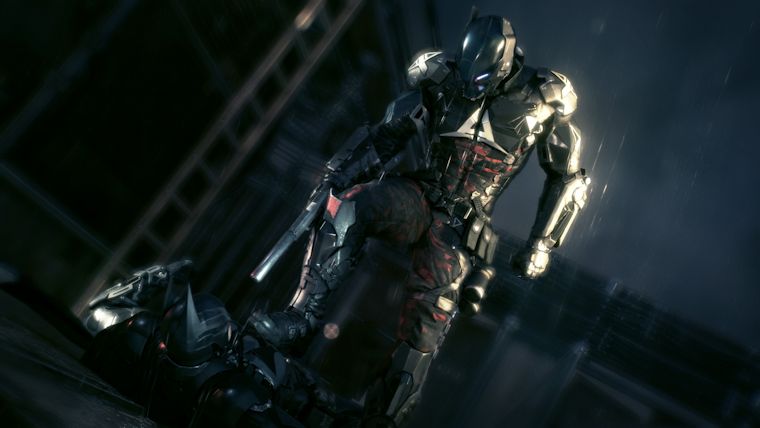 Batman: Arkham Knight is about a month and a half away from release and since its announcement over a year ago, we’ve seen an abundance of information about the game. Unlike many games where it seems like everything has been spoiled before release though, Rocksteady Studios has managed to show just enough to keep us interested, while still keeping us in the dark about most of the game itself. The level of mystery surrounding the game seems well suited for a major twist, which one has to think could potentially spell the end for the Dark Knight.

Bruce Wayne’s journey across the Arkham series has been an arduous one that has taken a toll, but he appears to have the toughest fight ahead of him in Batman: Arkham Knight. With not only Scarecrow and many other classic villains on deck, he also has to worry about the mysterious Arkham Knight that appears to be be dead set on ending Batman’s reign as the savior of Gotham City, similar to that of Bane in The Dark Knight Rises.

Rocksteady Studios has been adamant from the beginning that Batman: Arkham Knight would would be the conclusion of their epic Batman trilogy that started with Asylum and grew in scope with City. Across those games, Rocksteady hasn’t been afraid to take risks with deaths as seen by the Joker, so what could be more finite than the death of Bruce Wayne at their hands.

Anybody can just speculate that the final game of a game series may kill off the title character, but there is a lot more evidence that could lend credence to the belief that it could happen. Back in January, a very interesting statue popped up on Amazon as part of the Limited Edition of Batman: Arkham Knight that read “From a Grateful City In Memory of the Gotham Knight.” This rather ominous plaque stirred the pot on the conversation, but could have easily been written off as it being a tribute to the series, due to the series ending.

Not long after the reveal of the game last year, we learned that two exclusive pre-order bonuses for the game were set to involve the characters of Harley Quinn and Red Hood. Harley Quinn is confirmed to be a prequel, but Red Hood’s timing in the story is unknown on whether it is a prequel, concurrent, or a follow-up to the main story. This didn’t arouse any suspicion or anything, but the reveal of the full rundown of content found in the game’s Season Pass made things a little more interesting.

The Season Pass itself is very non-Batman heavy, which seems odd for a series centered around the character. The main story DLC offered is that of Batgirl, which will be done as a prequel instead of a follow-up, due to Barbara Gordon’s status at the present time in the game. There is mention of The Season of Infamy content where you “play as Batman in all new story missions.” However, the interesting piece of info is the Gotham City Stories section that is described as the following:

“Play as Batman’s key allies in narrative missions extending their storylines, from both before and after the events in Batman: Arkham Knight.”

All of the other content involving Batman seems to be set before the game or concurrent to the ongoing storyline, but the only one that seems to branch beyond the ending to the game is missing the Caped Crusader. The most recent trailer made a big point to show off how Nightwing, Robin, and Catwoman will be used in the game in team elements, but could we see Batman be killed in tragic fashion that leads the Bat Family to take over the mantle and move forward?

The biggest twist would be if Rocksteady killed off Bruce Wayne rather early in the game in a Kojima-esque switcharoo. That is a much more unlikely scenario, but it would be rather cool to see someone like Dick Grayson take over the cowl to conclude the series as a passing of the torch, as we saw following the Batman RIP storyline in the comics a few years ago.

What do you think will happen in Batman: Arkham Knight? Will Bruce Wayne’s Batman survive the game and end the series on a triumphant note or will he die and bring forth a whole new generation of heroes to patrol Gotham City? Let us know what you think or would like to see happen in the comments below.