The latest news in the world of video games at Attack of the Fanboy
July 31st, 2016 by Mike Guarino 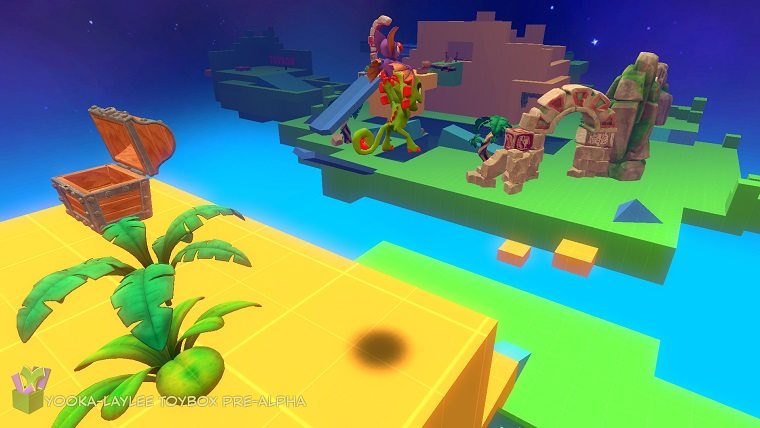 Last year the Kickstarter campaign for developer Playtonic Games’ Yooka-Laylee was one of the biggest stories in gaming, being one of the most successful Kickstarter campaigns ever and showing AAA publishers that the demand for mascot platformers is very real. The game wears its influences on its sleeve with its style, humor and mechanics all borrowing heavily from the Banjo Kazooie series, and now thanks to the backer-only toybox demo we’re able to get a brief taste of what to expect before the game launches early next year.

If there’s one thing that this toybox demo makes abundantly clear, it’s that this project is 100% a labor of love. The amount of detail and charm that is found just in this little demo is more than what you’ll find in plenty of other complete games, and it causes you to have smile from ear to ear while playing. The colorful characters of Yooka and Laylee are designed and animated beautifully, and the little noises that they make are adorable. You’ll bump into a couple of other characters along the way, and their accompanying dialogue that is delivered through the Banjo-like grunts are always a joy to hear. The entire area is very colorful and vibrant, and there’s that sense of wonder as you look on at all of the obstacles ahead of you that few games manage to pull off so well.

But what is this toybox demo, exactly? The developers made it clear from the beginning that it wasn’t a part of the main game and would be its own little experience to give an idea of what to expect next year. So, what we have here is one decently-sized world that is jam-packed with secrets and lots of verticality that has you scaling large obstacles or doing some simple platforming to get to your destination. The only real goal of the toybox demo is to collect the 100 quills that will then get you a Pagie, though you can roam around to your heart’s content as there’s no real end state. 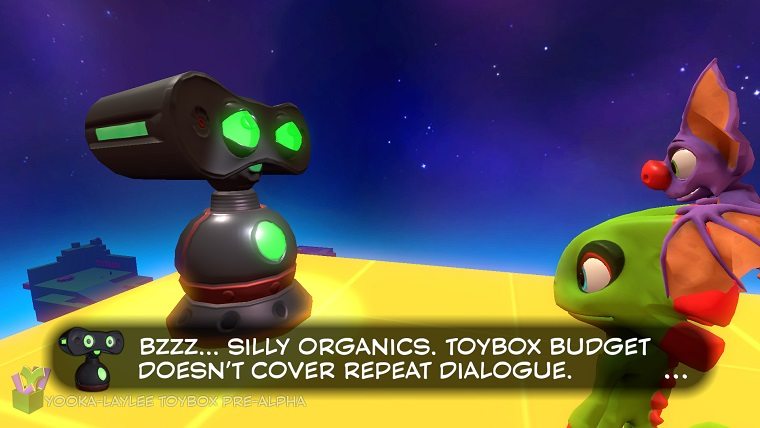 Traversing through this little playground is done with fantastic controls that fans of the Banjo Kazooie series will pick right up. While you can play with a mouse and keyboard, the game suggests using an Xbox 360 controller and that’s exactly what I did. Yooka moves and jumps around smoothly while Laylee provides the ability to float through the air to get across wide gaps, and she can ride on top of Yooka as he spins into a ball to get around much faster. It’s all very standard stuff for longtime fans of the genre, but it’s very responsive and getting through the demo’s many obstacles feels perfectly balanced. The only real issue right now is with the camera, which will often fail to give you a full 360 view of an area depending on where you stand.

Outside of the standard collectathon objectives that are present within this demo, the devs have hidden a lot of secrets that were easily the highlight of the demo for me. Those with a keen eye will find several well-hidden areas that require a bit of skill to enter, and inside them you’ll find assets for things that are currently being developed for the main game. One room has a series of particle effects for you to check out, while another contains all of the different kinds of terrain and how they impact your movement as you walk through them. They’re really cool Easter eggs that made sniffing out all of the secrets worth it, and I hope the main game follows a similar formula.

It’s only an isolated demo for a game that’s still a ways off, but the devs are doing everything right so far with Yooka-Laylee. The attention to detail with the character animations and dialogue is great, and the gameplay brings back lots of nostalgia from the golden age of mascot platformers. There are some technical issues with camera right now, but hopefully that’s something that can be ironed out in the coming months. Yooka-Laylee is definitely shaping up to be one of the most special games slated to release in 2017.