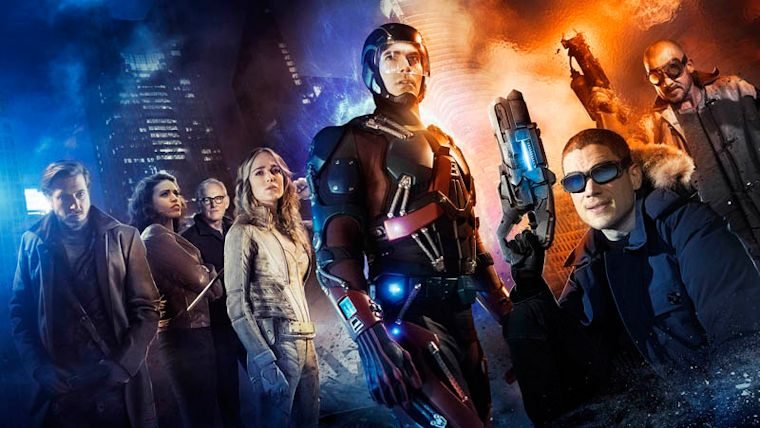 While Arrow concluded its latest season last night and The Flash is set to conclude its inaugural season next Tuesday, The CW is already starting the hype train for their next entry into the DC Comics TV universe with Legends of Tomorrow. The spinoff of both Arrow and The Flash was revealed a few months ago with a very interesting group of both returning and new characters, most interesting of which was the actress for a character we saw die on Arrow earlier this season. With the CW upfront presentation today, CW president Mark Pedowitz confirmed just who she will be playing during a conference call, which can even be seen in the first official promo art for the series.

Caity Lotz joined the cast of Arrow in season 2 as Sarah Lance, also known as the Black Canary. However, the character was shockingly killed off in the third season opener, paving the way for Sarah’s sister Laurel to take on the mantle of the Black Canary, as in the comics. Many had speculated for awhile based on leaked set pictures on who she would be, but it has been revealed that she is in fact going to be playing the White Canary, as can be seen in the above promo art.

With time travel being a major part of this spinoff, it is very possible this is a Sarah Lance from an alternate timeline that didn’t die or maybe it will be something as a result of The Flash’s finale that deals with time. There is always the possibility of the Lazarus Pits being involved now that they are present, but that is more unlikely with it being so long after her death. Based on rumors, we may find out just how next Tuesday through either The Flash finale or a quick promo to tease Legends of Tomorrow.

White Canary is already an existing character in DC Comics who happens to be a villain, but it certainly was not Sarah Lance in that continuity at all, so is is definitely going to be different. We’ll have to wait and see just how similar she is to the Sarah Lance we know and love from Arrow when she shows up in the series.

It was also confirmed today that Legends of Tomorrow will not be arriving until midseason as expected, so we’ll have to see how it will all tie into the ongoing Arrowverse that will also be adding Supergirl to the mix. For those who want more details about Legends of Tomorrow, the following is the official logline for the series as released by the CW.

When heroes alone are not enough… the world needs legends. Having seen the future, one he will desperately try to prevent from happening, time-traveling rogue Rip Hunter is tasked with assembling a disparate group of both heroes and villains to confront an unstoppable threat — one in which not only is the planet at stake, but all of time itself. Can this ragtag team defeat an immortal threat unlike anything they have ever known? DC’S Legends of Tomorrow stars Victor Garber (The Flash); Brandon Routh (Arrow); Arthur Darvill (Doctor Who); Caity Lotz (Arrow); Ciarra Renee (Pippin); Franz Drameh (Edge of Tomorrow); with Dominic Purcell (The Flash); and Wentworth Miller (The Flash).