How Do The Final Few Arrow And The Flash Episodes Tie Together? 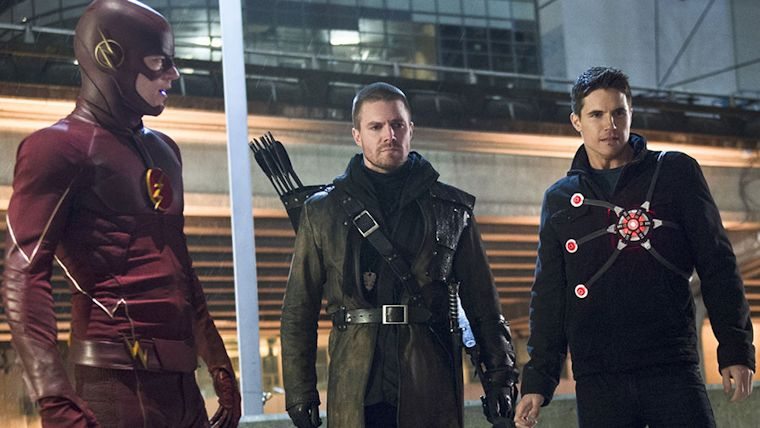 It truly is a television renaissance for comic fans over the last few years, with the likes of Arrow and Marvel’s Agents of SHIELD coming in the last few years and arguably the best yet speeding onto the scene this TV season with The Flash. The team behind Arrow and Flash has taken on the very ambitious task of telling two completely different stories, while still weaving together at times. We saw a major two part team-up between the two back before Christmas, but the two have once again crossed over as the seasons near a close, with the timing of said appearances being a topic of discussion right now.

Before continuing, there will be massive spoilers for last night penultimate episode of The Flash and last week’s Arrow, as well as speculation about the placement of tonight’s finale as well based on last week’s preview. As a result, do not read any further if you have not at least seen the most recent episodes of each. Just for peace of mind for those worried though, watching last night’s The Flash titled “Rogue Air” will not spoil tonight’s Arrow finale titled “I Am Oliver Queen” in any way.


Last week’s episode of Arrow, the one before tonight’s finale saw Team Arrow in Nanda Parbat trying to prevent a chemical weapon attack from eventually making it to Starling City. With Oliver Queen pretending to be the brainwashed Al Sah-Him, the episode ended with his team in great peril while being dosed by the seemingly Alpha and Omega virus. However, as soon as the episode ended, we see that The Flash himself Barry Allen would be showing up in the finale to help.

Before this preview, we had already seen that Oliver would be showing up in his League of Assassin’s garb on The Flash, though at that time we didn’t know if Oliver was really evil for the time being or not. Last night’s Flash definitely gave us some answers, though not everything is known yet. Entering the episode, some were concerned that the order was going to have last night’s The Flash titled Rogue Air actually be set after the Arrow finale “I Am Oliver Queen,” even though it was airing a day before. However, that worry was soon quelled when Barry mentioned to Joe that he could not reach Oliver because he was in some place called Nanda Parbat, with him comment full of total confusion. This would definitely not be the case if it was after Barry’s visit to Nanda Parbat seen in the preview, so it at least had to be set before.

The Oliver Queen we see in The Flash is definitely not putting on an act of any sort, as while he is dressed as Ah Sah-Him, it is most definitely Oliver. Somehow he evidently left the League to help Barry, which could mean Ra’s al Ghul just has total trust for him at this point. At the conclusion of the episode, we have Barry saying thanks to Oliver, with Oliver saying he may need a favor in the near future. This is obviously the aforementioned scene we see in the preview, putting the Arrow finale after last night The Flash for sure.

The only remaining question is the exact placement of Oliver’s appearance on The Flash. Was the ending to The Flash actually set prior to last week’s episode entirely or could it have been set after Oliver’s friends were drugged and locked in a cell that concluded last week. We really don’t know how long Team Arrow is out of it in that cell, whether it is a few hours or even days, so it is hard to judge. Perhaps the Arrow finale tonight will shed some light on the topic, but even if it is not, we do have a pretty narrow window of when these episode happen to take place anyways.

Home / Culture / How Do The Final Few Arrow And The Flash Episodes Tie Together?