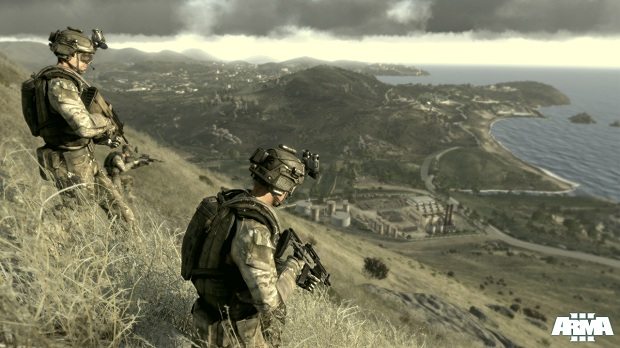 After sitting down with Bohemia Interactive to play their latest installment in the tactical shooter series, Arma 3, the very first word that comes to mind is – gorgeous. The game is looking quite exceptional, even in alpha stage. As for the gameplay, if you prefer the action of Call of Duty or Battlefield, then this game is not for you. It is designed to be very realistic, at least as realistic as a video game can get without having a machine-gun come out of the computer and plug a few bullets in your chest.

Despite being an open world sandbox, it’s not anything remotely like what you would find in games like Just Cause or Far Cry.

Much like the game itself, the demo was showcased in a non-linear manner. In that we simply jumped from mission to mission and training simulation to training simulation as we saw fit. This is more or less how the final game will play out as well. You will be placed on an island (the one demoed was merely 20 sq. km, but the final game will feature an island off several hundred sq. km!) where you will be able to roam freely using an assortment of vehicles and will be given sets of missions as you progress through the game, playing them in any order that you like.

Despite being an open world sandbox, it’s not anything remotely like what you would find in games like Just Cause or Far Cry. In fact the vehicles and weapons are simulated so well that you may feel restricted in what you are able to do, but once you master those techniques, you feel a strong sense of achievement and satisfaction.

The gunplay has seen some adjustments since Arma 2; it isn’t streamlined necessarily, but it does feel considerably more responsive and while it may not be very easy to use, it is much easier to understand, leading to faster adaptability. The only thing I noticed, controls-wise, is that iron sights have also been bound to the right mouse button instead of just the “0” key, but Arma’s classic ‘zoom’ feature is still available (just hold the right mouse button) and toggleable third and first person perspectives also returns for the latest installment.

The graphics may not rival Crysis 2 (or Crysis 3 for that matter), but it is clear that Bohemia Interactive has really taken the newest version of the Real Virtuality engine and optimized it for today’s top of the line PC hardware. Vegetation reacts realistically to collisions; the lighting looks quite natural with no cinematic effects like lens flare and an excessive amount of light shafts; character, weapon and vehicle models are very detailed with high resolution textures. The developers also went a step further with the realism in game with not only gunplay and physics, but adding subtle little nuances like a very noticeable illumination from gun fire during night segments.

You have a whole fleet of jeeps, light armored vehicles, tanks, choppers, submarines and more!

There is also a nice night & day cycle in game, including phases of the moon to vary the feel of nighttime combat and some dynamic weather (overcast was mentioned, but how much weather and what types there will be in game was not totally clarified). This plays a very key role in how engagements will play out through the course of the game. The night segment that I was shown was not all that dark, admittedly, but that was due to the fact that it was nearly a full moon. Had it been a half or a new moon, well…..let’s just say you had better have night vision or a tactical light handy.

Character and weapon customization functions quite efficiently. You can carry various tools and attachments in your vest that can be equipped to your hand or your weapon at any time. There’s plenty of room for carrying an arsenal of supplies, but your movement will be greatly reduced. Oh and of course we cannot forget vehicles. You have a whole fleet of jeeps, light armored vehicles, tanks, choppers, submarines and more! Yes, even submarines; not anything like a nuclear sub, in fact it’s sole purpose is to help you move around more quickly underwater. Nonetheless, it can be quite fun to use and functions somewhat similarly to a helicopter, believe it or not.

If you are a pro-pilot in Battlefield, forget it. The mechanics here, like everything else mentioned above, are designed to feel very authentic which leads to a number of crashes into the side of a building once you start out (unless you are an Arma veteran of course). I was guided through a helicopter mission where the objective was simple: find the enemy and kill them. Sounds easy right? Well, long story short, I got shot down without ever killing a single enemy (as far as I could tell).

You’re not a supersoldier, you have “balls of steel”

The flying seemed so easy at first, until I had to start maneuvering around to avoid gunfire and line myself up to rain hellfire on the little foot soldiers below. You can’t just simply find your vantage point and hover, you are constantly in motion. Banking at high speeds felt like I was going to stall out, so I ended up taking very wide turns to try and stabilize, but that just ended with me over shooting my target. Then I got shot…..right before I crashed into the side of a mountain (I still say I was merely shot down and there’s nothing you can say to change my mind).

I ended up giving the controls to someone more experienced and saw just how the flying was supposed to look. Even in the hands of a pro it was extremely tedious. He also ended up getting shot down, but managed to beat my resounding score of zero kills into oblivion. He assured me that anyone can sit down and learn how to properly fly in game, but I’ll tell you right here and now that it is certainly possible; you just have to put in the time, a lot of it.

All in all, Arma 3 was actually quite fun. Not in a “I’m a supersoldier blowing up everything in sight” kind of way, but in a sort of “the fact that I’ve survived this long and gone this far proves I am a badass.” That might not sound like much, but it still gets your adrenaline going in a different sort of way. You’re not avoiding a barrage of bullets from 200 enemy soldiers, about to get in a chopper and blow them all to kingdom come. You have to be patient, set up your route to get the job done as efficiently as possible, conserve your ever so precious ammo, and not get shot, because you will bleed out and die. It’s a kind of “balls of steel” moment.

Arma 3 will release exclusively for PC sometime towards the end of the year, but I was told that it most likely will slip into early 2013. I recommend keeping an eye out for this in the future…..unless you’re chicken. Yeah, you’re probably not tough enough to handle the likes of Arma. Whatever.