Blue Estate is On-Rails and Off the Chain 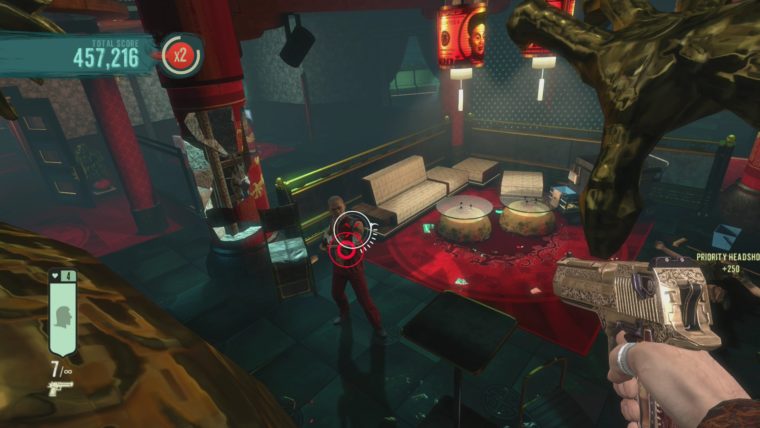 Let’s get something out of the way up front: HeSaw’s comic book-inspired Blue Estate is an on-rails shooter. Don’t exit this article just yet! I understand that’s a genre that can act as quite a heavy deterrent to many games, myself included, but I’m here to tell you that Blue Estate manages to separate itself from other similar titles. The standout reason here is that the game ditches the use of analog sticks, but it doesn’t require additional peripherals to play either. All you need is your PlayStation 4 controller. The controller’s gyroscope is what moves the on-screen cursor around. It may sound a little awkward, and it is at first, but it works to the game’s advantage once you adjust to the style. And you’ll most likely appreciate the fact that you can enjoy a motion-based game without flailing your appendages into fragile objects lining your room. The single feature that ties this all together is the ability to re-center/calibrate the reticule at any point via a single button press, allowing for on-the-fly adjustments that don’t slow down the hectic pacing.

That’s enough about the controls. I bet you’re wondering what the game is like outside of its controller functions. Blue Estate is a throwback to light gun games of the past, such as House of the Dead and Time Crisis, but with a more modernized feel to remain relevant in the next gen market while still evoking that powerful nostalgia. Viktor Kalvachev has helped bring the violent wackiness from the comic book pages to a new digital platform, and it looks like the transition was successful if our short hands-on demo is any indication. The game is fast, gory and juvenile. It carries a childish humor that fits its vibrant environments and one of its dim-witted protagonists. For example, in one level the player comes across an overweight woman dressed in a mermaid outfit as she tries out for a position at the casino that’s currently being turned to swiss cheese. After clearing the room of baddies, our “hero” turns his gun on the lady’s giant fishbowl, causing her to flop around the floor like a… well, you know what. Follow that up with a handful of sexual jokes and that wraps up that little confrontation. You can expect these low-brow jokes to be peppered throughout each level as you blast your way through the an onslaught of enemies.

As with any on-rails shooter, pouring lead into a slew of enemies is the main objective here. Pop a few heads, take cover, create more new orifices with your near limitless ammunition and move on to the next area. Blue Estate applies this formula with style with its impactful gunshots (resulting in violent head explosions) and addictive scoring system. Mix that with the Tarantino and The Darkness II vibe and you have a fairly alluring package. And its a package we’ll all be given the opportunity to dive into when it releases on the PlayStation 4 this Tuesday, June 24th. Check back with us after the release date for a more in-depth look at the insanity that is Blue Estate.

Home / E3 / Blue Estate is On-Rails and Off the Chain