Elder Scrolls Online debuted at E3 2012. We got a first-hand look. 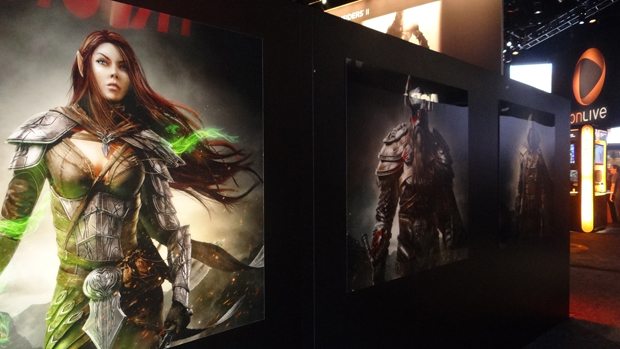 These days, the mere thought of another MMO saturating the market causes even the most hardcore of genre fans to wince with a skeptical shrug. Even Star Wars: The Old Republic sporting a franchise that boasts arguably the most loyal following across any piece of entertainment, has not launched without its share of hiccups, criticisms, and slight drops in subscription numbers. But now there’s a new major MMO release on the horizon, and it too has a fanbase that has proven its dedication and loyalty over the past decade.

ZeniMax Studios has been hard at work on bringing the cherished Elder Scrolls franchise to the MMO universe, and during our time with the game backstage at Bethesda’s E3 booth, the developers reiterated two major features that will set The Elder Scrolls Online apart from every other MMO on the market: real-time combat, and a PVP system capable of rendering hundreds of players during a single battle.

Before any actual gameplay was displayed, we were shown a video of the in-game environments inspired by all of your favorite Elder Scrolls locations from Skyrim to Morrowind. This is Bethesda we’re talking about, so the scale and detail being rendered in-game was extremely impressive. So much so that the graphics didn’t even feel like a huge drop off from the best looking settings we’ve seen in Skyrim.

Matt Firor, president of Zenimax Online, briefly detailed the background of the game and why you’ll be setting off on a journey across Tamriel. The Daedric prince Molag Bal is attempting to conquer the entire land and it’s up to your faction of choice to put an end to it. Cryodiil has been overrun, and in a desperate attempt for salvation, they make a pact with Molag Bal, setting the events of the game into motion. The three warring parties include:

We finally got our first bit of in-game footage of The Elder Scrolls Online, and we’d be flat out lying if we said it wasn’t among one of the best-looking MMOs we’ve seen. The demoer walked along a beach location just as the sun was setting, casting the area in brilliant golden and reddish hues. A massive fortress with a lavish exterior could be seen in the distance as Firor told us the game’s main quest could be played solo without the need to party up.

The demo showed the player solving a tile puzzle room like those seen so often in Skyrim. A nice implementation would see more difficult puzzles depending on the size of your party and perhaps even requiring a scheme of teamwork to solve them in sheer Portal 2 co-op style. Firor stated that The Elder Scrolls Online will feature public dungeons in line with their system of rewarding “good Samaritan” players who help out strangers in need. The demo highlighted this by showing a group of players navigating a cave and coming across a player getting battered by a Falmer. The group hacked him to death, and everyone was treated to the XP and loot that came with the kill.

The next portion demonstrated arguably the most important feature that The Elder Scrolls Online is attempting to implement, and in the end may decide the longevity of its stay on MMO gamers’ PCs. The real-time combat system had a noticeably minimal interface. According to Firor, ZeniMax wants players to “look at the world, not at the toolbar,” which when considering the sometimes complex nature of some MMO attack menus, may prove to be a selling point for gamers outside the core MMO fanbase.

Actions such as Blocking and Sneaking use Stamina, which is displayed by a green bar in the right corner of the screen. Utilizing such actions successfully will earn you Finesse points, though Firor did not go into detail in regard to how this system of losing Stamina to generate Finesse would affect the player in battle. The demoer showcased the combat system by holding down a key to charge up an attack. While the character’s sword slashes were rendering and registering just fine, the combat didn’t necessarily look to be more “real-time” than attacks you command in SWTOR, for example. We’re hoping that the combat appears quicker and more flowing as the game gets closer to launch.

The demo jumped to a quest in which the player must find a way to stop a rouge werewolf and the chaos he’s causing in town. Fighting through Nordic spirits amidst a thick grey fog, the player came upon a crypt containing the armor of a dead warrior. Putting the armor on, he is transported back in time to a memory that will allow him to understand how to defeat the werewolf. When he finally confronts it, he learns that the only way to defeat it is to lure it into a fire which executes his transformation back into a mortal human. Upon his discovery, the player is transported back to the crypt. He emerges outside and realizes that the spirits are now gone. Firor tells the audience that had the player not chosen to embark upon that particular quest, the spirits would have remained and the game world would have continued without the quest being completed.

Before closing, we got a look at what was by far the demo’s most impressive section: an 150+ character PVP battle. The Elder Scrolls Online will feature a storyline that will allow all three factions to compete for control of the Imperial city. When your faction succeeds, one of your members will be crowned Emperor. The demo cut to some overhead footage of one of the absolutely chaotic PVP battles players will be able to partake in. Hundreds of characters were shown on-screen, many in groups engaging in mini-conflicts with another smaller party.

Bright hues of orange, green and blue could be seen flying everywhere and players were being hit with rouge spells left and right. It was undoubtedly one of the most realistic battle simulations any MMO currently offers.The problem? This type of scale and rendering will only mean one thing to players without a top-of-the-line PC – lag…and lot’s of it. I could just imagine the number of players who will rage after their processor forces them to be cannon fodder rather than an active participant in an epic-scaled battle.

While The Elder Scrolls Online is certainly shaping up to be an MMO worthy of gamers’ time and exploration, we worry whether or not it offers the non-Elder Scrolls fan enough innovation to see long-term success amidst a very competitive genre. The Elder Scrolls franchise has always been near and dear to the hearts of RPG fans everywhere, so the move to the world of the MMO was simply its natural and logical progression. We’re hoping that what we see out of this game in the next few months including the game’s solid but not “wowing” combat mechanics will be built upon and expanded, preventing Bethesda from having to force the game down the Free to Play path.