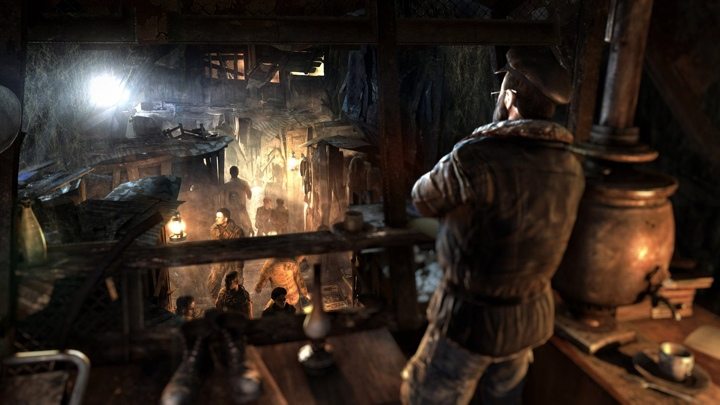 We sat down to get a look at the lastest build for Metro: Last Light at E3 2012. The brief demo of the game showed off an improved game, that looked impressive as ever from a visual perspective, with alot of the atmospheric tension that the original delivered.

After, we got to sit down with Huw Bey, the Communications Lead on the title, who acts as a liason for the Ukranian developers working on the title that is due out in early 2013.

Since there was a big shiny PlayStation 3 “Phat Model” sitting on the demo desk, it begged the question of what we had just seen, and what was pushing the incredible graphics in the game.

Huw: “It’s built on our own tech, the 4A engine.  We released on the 360 version as well, I don’t know if you seen that as well.  We’re actually very happy about how the 360 version looked.  We’ve made alot of changes to the render in the engine particularly in the outdoor environments, which were maybe a little bit lackluster compared to the interiors, where our dynamic lighting really shined. You’ll see plenty more of the console versions closer to release.  We’re confident that the game is gonna look great on all the platforms, compared to what the respective benchmarks are on those platforms.

We’ve been demoing the game on a Nvidia 580 thats running on a single card. By the time we come out, there’ll be lots of toys to playwith.  The engine scales pretty well, and we’ll be putting alot of bells & whistles in before launch, while we put the final polish on the game.”

Now that we’ve got that cleared up, we talked to Huw about the supernatural element of the Metro story. Whether it would be making its return in Last Light, and where the story was headed this time around.

Huw: “You saw hints of the supernatural in the Metro, it’s awash with this psychic phenomenon thats been thrust into the world by the Dark Ones, and Artyom as a character is very interesting.  He’s not a super soldier.  He’s hopefully like a vulnerable, identifiable  protagonist, that hopefully, players really come to like.

If you’re familiar with the first game and the books, Metro 2033 is a coming of age story for Artyom.  He starts off as this young man thats barely travelled 200 yards from the place where he was born and he’s entrusted with this mission.  He has two completely different philosophies ringing in his ears.  There’s the hunter philosophy “If its hostile you kill it”, which is kind of his guiding mission.  Over the course of his journey, he encounters Han, who has a much more open-minded “never act without thought or doubt” mentality that rubs off on him. ”

Metro: Last Light will ship with multiplayer, but the developers are being extremely secretive about the new addition to the franchise. Here’s what we learned about multiplayer.

Huw: “I don’t want to tell you anything about multiplayer.  This is why we’re focusing so much on single player at the moment, because our fanbase didn’t have experence with multiplayer, those guys are coming to Last Light for the single player campaign, and we know that when we say we’re adding multiplayer to it half the people are like “What? Why?”  We want to be absolutely clear that what we’re doing is being done with a bigger team, more support, a bigger production budget that allows us to expand the game without it being a detriment to the single player campaign.  In fact, the single player is longer, more polished, and we’ve learned from our craft since the first game. The multiplayer is something that we wanted to do for some time, we had prototypes up and running back in the 2033 days that we didn’t have the resources to include in the first game.  We’ve had these ideas for awhile, so we have this fun world to explore, lots of great weapons and tech, and we’re excited to start talking about it a little later this year.”

Metro 2033 introduced some fairly interesting mechanics into the gameplay that players (like myself) really enjoyed. The economy of the game, bullet trading, gas masks and scavenging for ammunition is still very much a focal point this time around.

Huw: “Yes, we’re keeping that mechanic (trading) in there.  It was born out of the fiction.  Dimitri had this idea that a bullet is worth a human life, and its quite a powerful metaphor.  So yeah, thats still there in the game.  This is kind of a goal that applies across the game.  We have a lot of really complex mechanics in Metro 2033 and I think by the time you play through it, you begin to really understand how they were intended to be used.  We really didn’t do a good job of explaining that to the player the first time around, so we’re really focused on relaying these more sophisticated mechanics to the player in a better way.  Players are crying out for a more cerebral shooter, and if anything we’re adding more stuff in; like the air supply and mask wipe mechanics as an additional layer to the gameplay outside of just shooting.  We have the secondary weapons, alternate fire modes to play around with.  If anything, the game will be even richer and more sophisticated this time around.  But we definitely need to do a better job of explaining these things to the player.”

At the onset of the short demo, Huw told us that he wanted to scare us. It was evident that many of the same gameplay mechanics that were introduced in Metro 2033 were being used again to set the stage for tension. Asking Huw to elaborate on new features, here’s what he had to say:

Huw: “We actually think we’ve got the formula pretty good on the first time around.  We’re not trying to throw gimmicks in or add stuff for the sake of it.  It all has to fit within this consistent world of Metro, so I don’t want to say its more of the same, because actually, there are a ton of aspects to the game that have been completely revamped.    We’ve added alot more detail to some specific elements like stealth, to make them more believable from an AI perspective.  The weapons feel alot more satisfying than before, animations have been reworked, particle effects enhanced, environmental destruction, and the inclusion of dynamic weather effects are all used to create this overarching tone that is used as it was in the first game, but we think in even better ways than the original.”

Metro: Last Light will be available in early 2013.