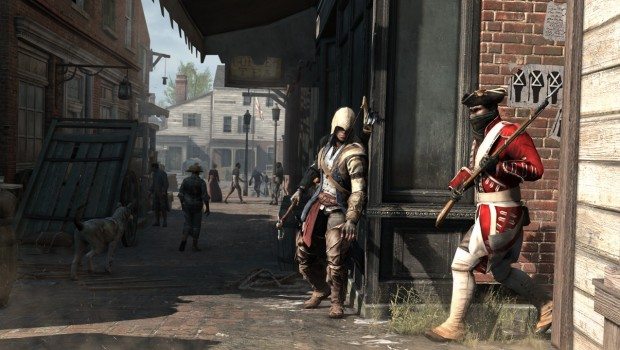 Like just about every other journalist in attendance at E3 2012, we begged and pleaded with Ubisoft to let us go hands-on with Assassin’s Creed III. Unfortunately, all Ubisoft employees are seemingly unsusceptible to bribes, so the best we could do was to be escorted back stage at the developer’s E3 booth and placed two feet from a TV where we were walked through exclusive Assassin’s Creed III gameplay. Somehow, we were okay with it.

While the demo loaded, a developer from Ubisoft Montreal informed us of the enormous scope with which protagonist Connor will make his playground. The game’s major setting, Colonial Boston, will be 50 percent larger than Rome. He told us that Assassin’s Creed III will be the most ambitious of the entire franchise, seeing a revamped and updated combat system and more realistic civilian and environment interactions.

The demo began with Connor walking alongside a massive ship set-in for port. As he shoved his way through the crowd, the irritated citizens shouted at him and shot him dirty looks as they went about their business. Dressed appropriately in Colonial-era garb as they walked among the cobblestone streets, I could already tell that Boston would immediately become my favorite location in the Assassin’s Creed franchise.

Much like the very fishing town it was inspired by, Boston in 1773 had a palpable excitement and apprehension. At a moment’s notice, a singular event could have erupted a nation wide battle for survival against an oppressive and seemingly unstoppable empire. Ubisoft Montreal is thankfully less focused on bulking up American history and is rather intended on re-creating it. Connor uses this perceptible tension to his advantage, praying on Redcoats and preventing them from evoking the intimidation they so eagerly await to enforce on the colonists.

The demoer performed some impressive Assassin parkour as he maneuvered over barrels, swung from the wooden rafters of the town’s fish markets, and even darted inside open building windows, diving out the other end of the corridor to continue the free-run to the next rooftop. Once atop an advantageous vantage point, Connor looked down to an open area to see a colonist on the chopping block in front of two British soldiers about to execute him. The demoer demonstrated Connor’s rope dart weapon as he shot one of the guards while the other’s back was turned and then jumped from the roof to the ground, sending the Redcoat on a pretty uncomfortable ride. He made quick work of the remaining guard and freed the helpless colonist from his bonds.

Connor moved smoothly back to the ship area, showcasing the game’s refurbished free-run system. He then nonchalantly grabbed a musket from a weapons rack nearby and sprinted up the ship’s ramp toward the group of British soldiers. The demoer stabbed the first in the back without any notice or alert whatsoever, and actually sliced through the guard’s body and subsequently fired the gun into the chest of another enemy. Ripping the musket from his victim, he dropped it and opted practice his lethal tomahawk skills.

The combat mechanics in Assassin’s Creed III look simply stunning. The way in which Connor stings together coordinated and cohesive attacks while not being bound to the same repetitive combat animations are sure to keep any gamer satisfied and eager to come back for more. Our Assassin no longer targets just the chest of the enemy, he is capable of slashing the legs, throat, and back, so even a bit of strategy will presumably come into play when up against large groups of British soldiers lined up to fire a row of muskets at you.

After taking down a kilt-wearing, axe-wielding “heavy,” Connor hopped onto a nearby rope and navigated his way to the very top of the mast, utilizing every aspect of the ship’s parts on his way up. Once there, he stood just feet away from a tattered British flag waving violently in the wind. The camera slowly panned out on Connor just as a golden hour descended upon Colonial Boston.

Assassin’s Creed III is set for an October 30th release date, and after all we’ve seen (unfortunately not played) from Ubisoft at E3 2012, we’re ready to declare this chapter in the Assassin saga a day one buy.