Ninja Theory walks us through the combat in Devil May Cry

The latest news in the world of video games at Attack of the Fanboy
June 9th, 2012 by William Schwartz 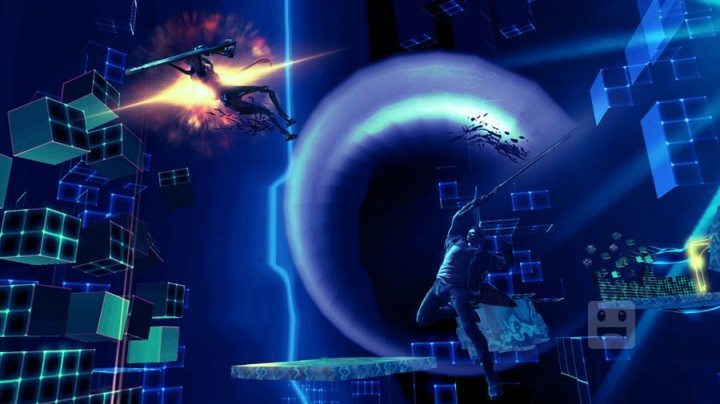 Capcom caught a lot of flak when they revealed the next Devil May Cry title.  A younger more modern stylized Dante was the major concern for most fans of the franchise.  While some fans might still have their concerns about the style of the game, DMC has always been about fast-paced and thoughtful combat systems.  This is precisely what we sat down to get a look at during E3 2012 with Ninja Theory’s Tameem Antoniades.

We start out midway through DMC, in a nightclub run by a demon named Lilith.  She uses the club to turn high society patrons into demon collaborators.  Ninja Theory let little time slip before they showed us that little has changed by way of Dante’s personality as he enters the club as only he can pull off.  The demo sees Dante on a mission to find Lilith, and once he does, he’s swept into a techno-pop game show environment, where he’ll need to survive multiple rounds of enemies to reach his target.

“When Dante is pulled into Limbo, the world can morph.  In this area, it’s Lilith, the head demon that’s controlling the world.  She’s turned this into this kind-of gameshow for her high society friends,” says Antoniades.  “She’s testing Dante, so in this section there’ll be a red floor and a blue floor.  These signal Dante’s different Angel and Demon modes.  It’s simple enough, but once you get into combat it changes the style of play.”

“I think now the idea of evil is that it works behind the scenes.  So we took that concept and said well, lets make a demon dimension.”

Tameem explains Dante’s weapons.  His sword, Rebellion, is used alongside his angel weapon: The Osiris Scythe; or the demon weapon: The Arbiter.  You’ll be pairing these weapons with Dante’s firearms: Ebony and Ivory.  There’s a bit of puzzle solving involved, explains Antoniades.  Ways to defeat some enemies isn’t very straight forward, so you’ll need to use some trial and error in some cases to find the best way to take out specific enemies.  Alot of the enemies in DMC can be attacked with different strategies.  “Some enemies require quite specific skills,” says Antoniades.  Some attacks have no effect whatsoever on certain enemies.  For this specific enemy you’ll need to use your angel weapon.  The next enemy, you may need to try your demon weapon.”  As the combat demonstration carried on, Antoniades also showed off some classic features from the Devil May Cry franchise.  “We’re preserving some of the features that hardcore Devil May Cry fans live and die by, you just saw there a double jump cancelling move.  That’s the kind of hardcore feature that we’re making sure to preserve for the long-time fans.”

Proceeding through the demo, the game show offers multiple challenges.  These range from taking out different enemy types, defeating enemies in a timed manner, and others.  While the main mission was fairly straight forward, there appeared to be multiple routes that could be taken to get to the same result.  Like classic DMC games, you’ll be rewarded for playing efficiently and stylishly.

As you rack up kills in DMC, you’ll also be building towards a “Devil Trigger” mode.  The when activating Devil Trigger, it launches enemies up in the air, making them vulnerable.  Your power doubles, the speed of your attacks gets faster, and your health restores, and you can trigger the mode for as little or as long as you want.  These buffs to your character stats go hand in hand with the a more stylish view on screen.

As we came to the end of the gameplay demo, Antoniades fielded questions, and here’s that Q/A Segment below:

Q: The soundtrack that we heard was all electro.  Will that be a theme throughout the entire game?

Antoniades:  It goes from dark electro to industrial, to metal.  We’re gonna be announcing the people involved next month I believe.

Q: What was the inspiration for the new look of the game?

Antoniades:  The inspiration for the new look was to try an understand if the DMC didn’t exist, and was invented today, what kind of setting would it be in.  We chose it to be a real world setting.  If Dante was walking down the streets, in this world where demons are watching, how would he dress what would he look like?  So, there’s more naturalism in the environments, more reality in the environments, more naturalism in his clothing style.  There’s things that we want to explain in this game that haven’t been explained in other DMCs.  This is his younger years, so he looks a little bit different.

Q: The Limbo part of the game, where did that inspiration come from?

Antoniades:  By setting it in the real world, obviously you can’t have demons walking around amongst humans for it to make sense. So, we thought about the nature of evil.  In the old days, evil was a guy with horns.  Then people like Khadafi and whoever, are very clearly evil.  I think now the idea of evil is that it works behind the scenes.  So we took that concept and said well, lets make a demon dimension.  They influence us through finance, through media, through all these different ways.  In ways we can’t see.  Dante, because he’s got devil blood in him, can cross worlds into Limbo, and you get to fight the demons physically.  It was a combination of ideas. The Live is a movie that I loved, you know, and that had a similar thing.  The idea of demonology, spirits in another plane, it’s all from that stuff.

Q: So, you’re going to be touching on these different subjects throughout the entire game, with enemies themed in that manner?

Antoniades: Yes, there’s quite a heavy, quite satirical element.

Q: The enemies that we saw with the Angel and Demon weapons that needed to be used, the enemies were marked in different colors.  Will that be a theme during the entire game?  Will that carry throughout the entire game, or, will you just need to use trial and error?

Antoniades:  Not so much.  It’s quite ranging.  So, there it’s really obvious.  Some enemies are very clearly identifiable as an Angel or Demon. Alot of them aren’t.  Depending on what they do, you’ll need to switch and use different weapons. So, yeah, it changes throughout the game.

Q: You guys are known for your story telling.  I was wondering if there was going to be an emphasis on story telling in DMC?

Antoniades:  Yes, I think that’s fair. We’ve not really talked about the story telling side of it because we’ve been focusing on what we think people care more about. Which is whether we can come up with a DMC combat system, and evolve that.  That’s what our focus has been, working with Japan and evolving the combat system.  But we’re taking our cutscenes further than we ever have before, evolving from where Heavenly Sword and Enslaved left off.  We’re using the same studio that they used to shoot Avatar on this game.

Q: How much is Capcom Japan involved in the game?

Antoniades:  Basically the Capcom stance on the whole thing, is that when it comes to things that Ninja Theory is really know for like story telling and presentation, technology, visuals, they have almost full reign to do whatever they want.  What Capcom is concentrating hardest on, is the combat system, making sure the controls are very responsive, making sure the enemies and weapons in the game are cohesive.  Using the know-how that we’ve built up over the years, to give these guys a leg-up on the combat stuff, that a lot of other companies might not be able to fulfill.  These guys are bringing to the table alot of things that we wouldn’t be able to do.  It’s a true collaboration in the purest sense of the word.