The latest news in the world of video games at Attack of the Fanboy
June 9th, 2012 by William Schwartz 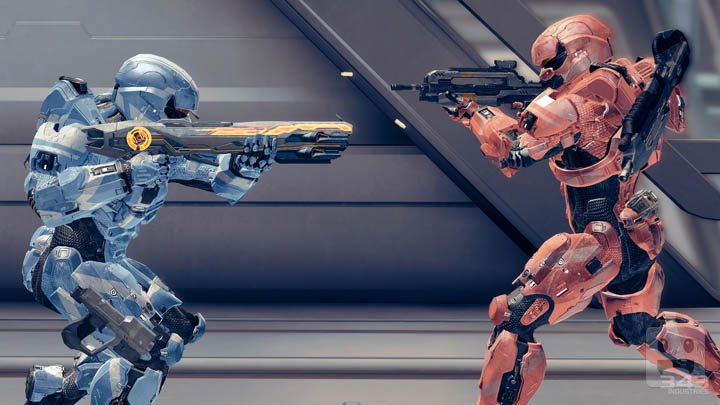 E3 2012 was unquestionably a year of software. 2012-2013 will see a slew of highly anticipated titles, many of which we got to see and go hands-on with during the show. While the South Hall of the L.A. Convention Center was teeming with salivating press anxious to get a first look at the games sure to make a splash in the coming months, there just so happened to be one game on display that was clearly generating some buzz on its own in the West Hall. Halo 4 didn’t just have its own monstrous booth equipped with a giant LED TV displaying the game’s multiplayer, it had a full-scale model of a Warthog that fans could sit in.The in-game footage had no commentary nor did it have music, only the sights and sounds of the most anticipated multiplayer in recent memory. 343i was sending a clear message: Halo 4 will speak for itself.

All of this pandemonium couldn’t distract me from the apprehension I felt before picking up the controller. When 343i first detailed the game, I had more than a few questions and points of worry. But after just a single game, those doubts seemed to just wash away amidst the chaotic glory that is Halo multiplayer. Needless to say, the excitement was palpable and the line to get in was long, yet I managed to finagle my way inside and am now more than happy to report that my time with Halo 4multiplayer wasn’t just good, it was sensational.

If you’ve ever been to a Midnight launch for a AAA blockbuster, you have an idea of what the atmosphere outside of the Halo 4 booth looked and felt like. The approximate wait for one multiplayer game of the legendary FPS? Just over three hours. Fans brought pillows and their favorite electronic devices to make the wait as painless as possible. They watched MLG videos of their favorite Halo pros and looked at the big-screen in awe as the demo showcased what 343i is bringing to the table this Fall.

If all of that weren’t enough to get fans pumped, why not send 343i Executive Producer, Larry Hook, out every 20-30 minutes to give away free Halo swag? If the crowd was able to chant loud enough to drown out the Sony booth right next door, Hook would toss Halo 4 t-shirts into the massive line. “We want Sony to turn up their music!” he yelled to raucous cheers from the audience. You’d think the retail on one of those shirts was the price of a console if you happened to see how people fought over them, jumping and swiping more furiously than a desperate bridesmaid trying to catch a bouquet.

Given the opportunity to go inside, the 343i devs first walked us through Halo 4‘s E3 demo, this time with some commentary demonstrating what exactly was on screen. The new enemies seen in the first campaign footage are in fact “Prometheans,” the highest and most respected group of warriors in the Forerunner chain of command. That big mo-fo that roars in the Chief’s face before being stabbed and booted by him? That’s a “Knight,” a commander of the battlefield who can bring in support units at will. While we got to see the Crawler (that four-legged dog thing) in action, we also got a glimpse of the “Watcher” that can catch your grenades and throw them back at you, and even resurrect enemies you’ve downed.

After seeing the Chief do a little bit of handiwork with the Forerunner Rifle, a 1-shot precision weapon, 343i showed us a video detailing Spartan Ops and War Games, the franchise’s new take on multiplayer. Giving the game’s Spartan vs. Spartan mode a backstory, your matches will all take place aboard the UNSC Infinity, so Team Slayer is now “Infinity Slayer.” The developers also briefly explained that Infinity Slayer’s power weapons will not be determined by set points on each map, but by an “Ordinance Meter” that each team can fill up to gain control of them.

The video faded to black and the lights slowly came up, signaling that the time we had all been waiting for since June 2011 was finally upon us. The developers led us into a connecting, dark room where a shade of blue light shone on about 20 game stations. We were informed that we’d be playing a FFA variant called “Regicide” in which the leading player becomes the “king.” Everyone can see the king’s position on the map, and those who can take him/her down get extra points added to their score. I demoed the game on Day 2 (343i was showcasing a new map each day at E3), which allowed me to play “Adrift,” a UNSC mining vessel. The map prominently featured two main, circular levels with airlifts and winding paths to navigate. A large foyer-like area in the center of the map was the location for cross-map BR battles and a great vantage point for players on the upper level.

I began playing around with Halo 4‘s new loadouts, and boy are there a lot of interesting combinations and customizations that will suit a varity of particular play-styles. Your primary, secondary, and grenade type can of course be customized, but armor abilities have greatly changed. Hologram makes a return and brings along with it Promethean Vision that works as an X-Ray vision ability, allowing you to track enemies through solid barriers, the Hardlight Shield, and the Thruster Pack which enables you to utilize a short burst of speed for accelerated movement.

Support Upgrades and Tactical Packages are two implementations that really drive the change in direction 343i has taken with Halo 4 multiplayer. What you choose here will have a substantial impact on how you play and what abilites you can provide your team with. We’ll quickly detail the two sets of loadout categories below:

Ammo Upgrade – allows you to carry more ammo than normal.
Sensor Upgrade – enhances the range of the motion sensor.
Awareness Upgrade – integrates the HUD motion sensor into all scoped weapons. Hint: If you’re a Sniper, you’ll want to choose this.

I tweaked my loadout to Promethean Vision, Ammo Upgrade, and Shield Package. Now to tell you about how my weaponry consisted of the BR and Plasma Pistol. That’s right. I was allowed to start the game with the infamous “noob combo,” and I can hardly describe the hilarity that ensued when fellow media were being spawned, hit with a fully charged plasma shot, and getting taken out with a final BR burst to the head. I often found myself putting shots on absolutely everything and anything. With the Ammo Upgrade I wasn’t concerned about conserving ammo or scrounging around for it. With the help of the Promethean Vision, I had countless opportunities to see opponents before they knew I was around the corner, giving me just enough time to charge my Plasma Pistol. As much as I loved the damage I was dealing, my particular loadout will have to be heavily adjusted or formatted for the competitive circuit.

It’s worth noting that I barely noticed the fact that everyone had the ability to sprint. Though it was an addition that initially concerned me, it may be a feature that you notice less and less as time goes on. It certainly proved to be a useful tool for me as I put my head down and ran from oncoming fire countless times throughout the match. One change I had a very difficult time getting used to however, was the changing of the “crouch” button from LS to B. Using the Left Stick to crouch has always felt like a natural and logical button control. Having to use the B button to crouch forces players to sacrifice their aim with the RS which is extremely frustrating if you’re trying to avoid detection from an enemy radar and want to pop out at a specific time.

I was simply ecstatic to fire a BR again within the Halo universe. The weapon is everything you knew and loved before, with some minor tweaks to the way it recoils, rising slightly with every burst. It was undoubtedly noticeable that the players sporting the BR at spawn were all at the top of the leaderboard. My noob combo loadout had me on top for the majority of the game. Toward the end, I was at 295 points, 5 away (1 kill) from winning and over 15 points ahead of the next guy below me.

In an end-game series of events that could only happen to me, I was outed as king after the #2 player tossed a rouge plasma grenade meant not for me, but the guy in front of him firing off AR rounds. The plasma landed on my face, giving him the win and causing the 343i developer behind me to burst out in awed astonishment and amusing hysterics over what he just saw. Most surprising of all, I had no desire to rage or choke-out the bastard who stuck me. Instead, I simply laughed and looked toward the ceiling in disbelief. I knew I had just participated in the definitive multiplayer experience at E3 2012. I knew that not a single game on the entire show floor could have provided me with the excitement and nail-biting, pulse pounding thrill that I had just experienced first-hand. Even more reassuring, I knew that King-117 was back, and damn did it feel good.