In search of Thermal Energy on Lost Planet 3 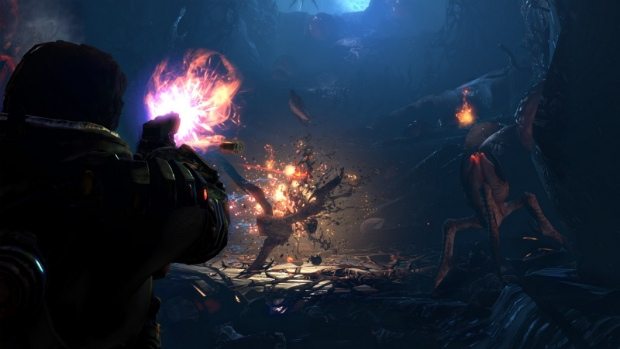 Capcom has made no secrets about Lost Planet 3’s new character and massive “rig” found in the upcoming sequel. In a behind closed doors session at E3 2012, Capcom unveiled a segment of gameplay that featured not only an entirely new area, but how Jim will be tracking down Thermal Energy as one of the primary gameplay mechanics in the upcoming shooter. In this E3 demo, Capcom took us deep into a cave system to investigate a thermal post, that harvests thermal energy.

You’re asked to go and find out what happened to it, because Jim our main character is actually replacing a contractor that got lost in the wilderness. Along with her, the locations of all the thermal posts that she planted was also lost. As Jim enters the icy cave system, the developers show off his starting weapon, the pistol, which has unlimited ammunition. ” It’s a trusty back-up weapon” described by our tour guide: Matt Sophos. Jim will be able to carry two other weapons besides the pistol and vary from rifles, shotguns, and other ranged weapons. We’re also introduced to Jim’s hunting rifle, a bolt-action weapon that was passed down from generation to generation within his family, and has it’s own origin story within the game. “Even with the weapons, we’re trying to include that personal touch, as one of the core pillars of the game, with distinct markings for Jims family heirloom.”

The Akrid found in the cave are familiar to Lost Planet fans. There will be new types of enemies that haven’t been seen before on Lost Planet, but for the demo, the Akrid type will be familiar. After battling through what seems like a never-ending supply of Akrid, the thermal energy that Jim searches for, and eventually finds, we learn is a resource to him. You can harvest this resource and take it back to your base to buy and upgrade weapons, a mechanic in the game that will help develop your character, and progress into uncharted territory.

Going deeper into the demo, the cave opens up into an Akrid Nest that is covered in exploding egg sacs. “With Lost Planet 3, what we tried to do here, is create an atmospheric, dark situation while keeping all of the action and gun play intact. So, it’s not a horror experience, it’s not a survival experience. It’s very much keeping the hallmarks and gunplay that the series is known for, in a more atmospheric environment.”

During Lost Planet 3’s campaign, you’ll find survey maps that disclose the location of other thermal posts. You can travel down that path as a side activity and collect more thermal energy which can be used to better your character. The longer that you keep any given thermal post active, the more energy that will be there when you go back to retrieve it. The Akrid in the area also respond to the heat of the thermal posts and will build larger nests given time to do so. “This was implemented as a risk/reward mechanic. It’s not part of the main narrative, it’s not a key story mission. It’s one of the optional activities that allows you to get currency for upgrades and things like that.”

Once the main mission goal of extracting the thermal energy is complete, Jim heads back the way he came in the cave system, facing more Akrid along the way. When he does, a massive storm has rolled in and can be seen through an opening above one section of the cave that is swarming with Akrid. The dynamic weather system is explained in greater detail “We’re seeing this area we came through earlier in an entirely new light. Reduced visibility, Jim’s animations, and the environments themselves have a different feel. Even if you go somewhere and do simething, on the way back, you can very much change what the player experiences with the weather system.

Following the demo, Capcom allowed for questions about what I had just seen.

Can this sequence be played where there are no weather changes on the way back out of the cave?

Can you elaborate on the thermal posts mechanic?

Sure, You’ll be able to find these thermal pockets in the game world. When you do, you’ll be able to plant thermal posts. In real time, they’ll gather energy. Lets say I’m kind of new to the game and plant a thermal post in a certain area. At some point, I’m going to want to go back and harvest the thermal energy. If I go soon, there’ll be a little thermal energy, there might be a little bit of growth from the nest but nothing I can’t handle. If I wait an hour or two game time, and go back there, it’s gonna be completely overgrown with Akrid. But by clearing those out, I get a huge amount of thermal energy that I can take back to the base.

So is there a mission hub, where you can back to certain areas like that?

“Basically, you’ll have your hangar which is in our E3 demo. When you leave that hangar, there’s what we call a hub and spoke system. There will be areas that are connected to other areas. The portion that we played, is a “spoke”. This is a cave that branches off into a larger area. That larger area would also have multiple paths. Some areas you can just wander into, while others you may be required to have specific upgrades to enter. It’s a good mix of critical path stuff, and exploration content.”

What I saw was relatively brief, but was looking like it had some interesting mechanics added to counter the boredoms that linearity can breed.

Lost Planet 3 is due out in 2013, and we’ll likely be hearing more about this promising sequel in the near future.

Home / E3 / In search of Thermal Energy on Lost Planet 3